Why Are Some Movies Underperforming? 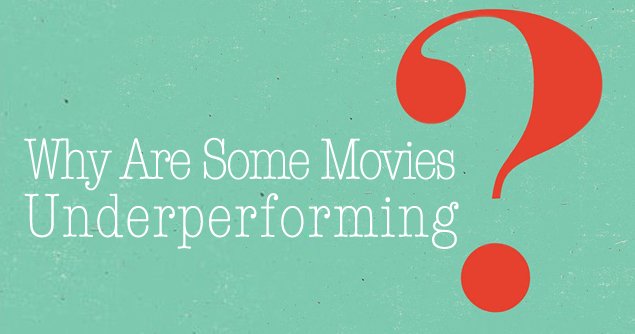 Why Are Some Movies Underperforming?

Except for a few tentpole movies like ZOOTOPIA and BATMAN V SUPERMAN, the Hollywood trade papers have been bemoaning lately about a weaker than usual box office. Fingers have been pointed at the electronic competition, such as Netflix and video streaming, but this competition hasn’t prevented people from going to major movies. Fingers have also been pointed at several genres, from romantic comedies to religious movies. However, for anyone who’s studied filmmaking, a large part of the problem is glaring structural errors, and composition errors which 20 or 30 years ago would have been avoided.

Years ago, studios had a firmer control of moviemaking. A friend of mine, who used to run distribution for Warner Bros., sent the biggest star at Warner Bros. back to the editing room on a sequel to his blockbuster movie because the movie wasn’t good enough. Good enough is not just a subjective term, it’s very objective.

For instance, a movie needs a clear premise, or as Andrew Stanton of Pixar says, the promise of where the movie takes you. The promise of FINDING NEMO is that the clown fish father will find his son, little Nemo. If he finds Nemo too soon or doesn’t find Nemo at all, the movie’s ruined.

Several recent movies had the promise fulfilled too early in the movie so that the remainder of the movie became flat and lost its emotional power. Other highly anticipated movies never reached the climax of fulfilling the promise and therefore left the audience disappointed. Others, including some big blockbuster movies, had very weak premises that barely sustained the plot.

Many movies also have composition problems. This doesn’t just include offensive elements such as graphic foul language, sex and violence, but it also included too much time at the hospital, too many sad situations that made the movie dreary with no comic relief, or too many pointless special effects. Eighty percent of moviegoers go because of humor, and humorless movies have a tough time at the box office.

Alfred Hitchcock used to say every movie could be fixed in editing. To be more generous, most movies could be fixed in editing, and most of the underperforming movies could have been fixed if the filmmakers had used the basic elements of their craft and read our Report to the Entertainment Industry. Even better, they could read HOW TO SUCCCEED IN HOLLYWOOD (WITHOUT LOSING YOUR SOUL) or take our HOW TO SUCCCEED IN HOLLYWOOD filmmaking workshop, where experts help students learn their craft in four days.

Aside from all of this, it must be noted that some filmmakers are artists and aren’t concerned about the entertainment industry as a business. The Coen Brothers often fall into this category, as does Terence Malick. They change the structure for their own artistic vision and purposes and, thus, can’t be criticized for pursuing a different path.