"Stuck in the Liberal, Feminist 70s" 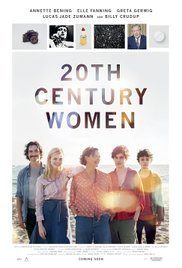 20TH CENTURY WOMEN is a quirky drama with lots of comedy, set mostly during the summer of 1979 in Santa Barbara, California. Dorothea Fields is a determined 55-year-old divorced single mother raising her 15-year-old son, Jamie. They live in a large family home, which Dorothea rents out to Abbie, a 24-year-old punk artist, and William, a thirtysomething handyman. Jamie’s obsessed with Julie, his 17-year-old promiscuous neighbor. Julie’s close friends but doesn’t want anything more. After Jamie almost dies playing a suffocation game, Dorothea enlists Abbie and Julie’s help to teach him about women and how to become a good man. Her plan backfires, however.

20TH CENTURY WOMEN has an unfortunate silly title, but it has some effective moments of inspiration and touching interactions between family members and friends. Annette Benning is excellent as the mother. However, the bittersweet ending is too sad, because an epilogue reveals that all the characters, including the mother and son, eventually drift apart. Also, the Romantic, feminist worldview of 20TH CENTURY WOMEN contains some strong foul language, strong sexual immorality, brief nudity, and light underage substance abuse.

(RoRoRo, FeFeFe, B, Cap, PC, LL, VV, SS, NN, AA, DD, MM) Very strong Romantic, liberal worldview with very strong liberal and some leftist feminist elements, including teenage promiscuity and young people defend the punk rock movement to 55-year-old woman who’s perplexed by it, mitigated by some positive elements that include mother and son’s flawed attempts to establish a better bond and better communication between themselves, a promotion of birth control in one scene is balanced out somewhat by pro-life elements in another scene, plus some capitalist elements are combined with an anti-materialistic perspective that’s slightly positive but not as truly expressed as it could have been, and the mother thinks Jimmy Carter’s silly “malaise” speech was “beautiful”, while the men in the room say the president is finished as a candidate for 1980 because of it, which turned out to be true; at least 10 obscenities (several “f” words), one strong profanity involving the name of Jesus and one Oh, God exclamation; brief disturbing violence includes teenagers play a passing out game, but one teenager almost dies, and teenage boy beats up another boy after he asks a lewd question, when the boy crudely brags about a sexual conquest; strong sexual references include very crude verbal references to sexual functions in several places, 15-year-old boy tries to run his hand up 17-year-old girl’s thigh, but she removes his hand, teenage girl hugs teenage boy while lying next to him, but she says she just wants to be friends, and nothing sexual occurs between them despite his desires for her, teenage girl likes to come into teenage boy’s room at night and sleep platonically with him, references to teenage girl’s promiscuous involvement with other teenage boys, implied fornication between 24-year-old woman and slightly older man, one or two references to man’s affairs, and teenage boy asks a very crude and frank question of another teenage boy who’s bragging about a sexual conquest, as males do; upper female nudity in short sequence and upper male nudity; alcohol use and teenage boy appears drunk; older woman smokes cigarettes a lot, teenage boy seems high in one scene, one teenager smokes marijuana from a bong, and brief discussions about marijuana; and, teenage rebellion, teenagers run away from home but are found, mother has a permissive way of raising her teenage boy, and teenage boy asks some impertinent questions of his non-communicative mother.

20TH CENTURY WOMEN is a quirky drama with lots of comedy about a woman and her teenage son, and the people they encounter over the years, especially during the summer of 1979. 20TH CENTURY WOMEN has its moments, along with a positive but strained mother-son relationship, but it has a strong Romantic, liberal worldview, and some of the humor and drama relies on some teenage rebellion and the crazy, crude and lewd feminist advice about women that the teenage son receives from a young woman and an older teenage girl, whom he and his mother befriend.

Set during the summer of 1979 in Santa Barbara, Calif., the story follows Dorothea Fields, a determined 55-year-old divorced single mother raising her 15-year-old son, Jamie. They live in a large family home, which Dorothea rents out to a handyman, William, and a young woman and cancer survivor, Abbie, who’s a punk artist. Jamie has grown up with one of his neighbors, a 17-year-old girl named Julie. Jamie is obsessed with Julie, but she’s more mature than him and just wants to be friends.

After Jamie almost dies from playing a suffocation game, Dorothea enlists the help of Abbie and Julie to teach him about women and how to become a good man. However, her plan backfires. Despite this, their mother/son bond will not be denied, even though the communication divide between them is wide.

20TH CENTURY WOMEN has an unfortunate silly title, but it has some effective moments of inspiration and touching interactions between family members and friends. The movie also has some excellent performances, especially by Annete Benning as the mother and Greta Gerwig as the punk artist. However, the bittersweet ending is too sad, because, eventually, an epilogue reveals that all the characters, including the mother and son, drift apart.

Also, 20TH CENTURY WOMEN has a strong Romantic, liberal worldview. Although the movie at one point seems to make fun of radical feminism’s obsession during the 1970s with sex and women’s bodies, its politics still seem to favor a more liberal, if not a leftist, perspective on women’s rights. For example, the 17-year-old girl’s sexual promiscuity is hardly criticized. In fact, the punk artist takes her to Planned Parenthood to get some birth control. On a positive note, however, the movie reveals that the punk artist later gives birth to two sons with her husband, and they seem to have established a suburban home with a home-based business for the wife’s artistic talent. So, there’s at least a very brief pro-life message here. That said, the movie also seems to have a liberal perspective on the culture and politics in 1979 and in the Eighties during the Reagan administration.

Sadly, all these negative elements are combined with some strong sexual references, light underage substance abuse, foul language, and brief gratuitous nudity. As a result, MOVIEGUIDE® considers 20TH CENTURY WOMEN excessive and unacceptable. The acting and poignant or insightful moments aren’t that great enough to overcome all of this and make 20TH CENTURY WOMEN worth watching. Ultimately, many of the feminist changes that were wrought in the 1960s and 70s were bad for women, bad for men, bad for society (not to mention religion), and bad for children.