GETTING EVEN WITH DAD 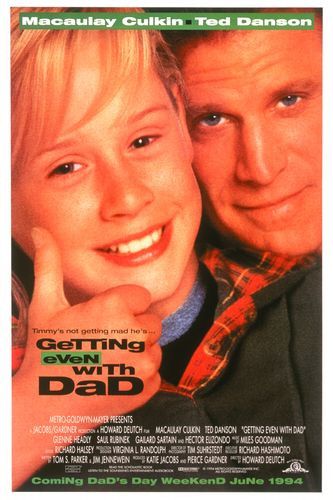 In GETTING EVEN WITH DAD, Ray Gleason (Ted Danson) is the "mastermind" behind the robbery of 1.5 million dollars in rare coins. He is the "mastermind," that is, until his son unexpectedly drops in for a visit and teaches him about morality and truth. The movie presents a wholesome message--a father choosing his son over money, but is marred by profanity, obscenity and implied promiscuity.

(B, Ab, LL, S, A, M) Moral worldview which presents some biblical principles, although there is some disrespect for the House of God; 11 obscenities & 7 profanities; implied promiscuity; alcohol use during meal; and, blackmail & theft.

In GETTING EVEN WITH DAD, Ray Gleason (Ted Danson) is the “mastermind” behind the robbery of 1.5 million dollars in rare coins. He is the “mastermind,” that is, until his son unexpectedly drops in for a visit. Ray’s son, Tim, is a lonely child, forced to live with his aunt after his mother’s death, who will do anything to get his father to spend time with him…including blackmail. Tim steals the rare coins from Ray’s hiding place in order to gain his father’s attention.

GETTING EVEN WITH DAD is a feel-good movie with a ending that takes an unexpected twist. The moods of the movie are created beautifully through excellent cinematography and careful selection of music. Macaulay Culkin plays his usual role as an intelligent 11-year-old who out-smarts his father’s cohorts and the cops. The movie does present a wholesome message, as Ray must choose between the money and his son. Tim also demonstrates some moral values, including his statement: “I think stealing is wrong.” Regrettably, instead of the father teaching his son about morality and truth, 11-year-old Tim teaches Ray. Also, there are some questionable elements in the movie, including profanity, obscenity, robbery, blackmail, disrespect for the House of God (in one scene), and implied promiscuity. However, overall the movie was well-crafted and presents some biblical principles.