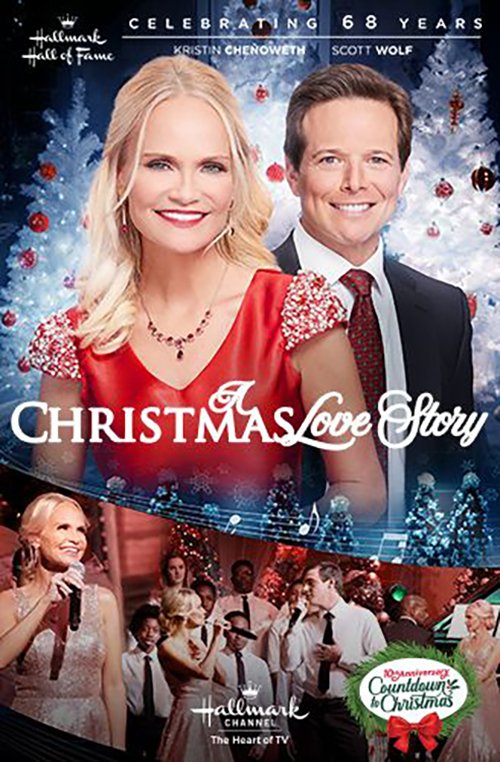 A CHRISTMAS LOVE STORY is a refreshing Hallmark television movie starring Kristin Chenoweth. Kate, a retired Broadway performer turned youth choir leader, is tasked to write an original song for her choir’s annual Christmas performance. Danny, a teenager about to enter college, volunteers to help, but turns out to have a beautiful singing voice. He decides to join the choir, but his widowed father, Greg, thinks Danny’s too busy. Kate and Danny convince Greg to let Danny sing. Romance blossoms between Kate and Greg, but a plot twist complicates matters.

(CCC, BBB, Ro, V, A, M):
Dominant Worldview and Other Worldview Content/Elements:
Very strong Christian, morally uplifting, pro-life worldview as the movie is filled with Christ-centered Christmas Carols, there’s references to singing in church, lead female character wears a cross necklace through most of the movie, depictions of Angels are used as decorations, movie promotes caring for others before yourself, movie takes a pro-life stance as woman reveals that about 18 years ago she became pregnant but wasn’t ready to be a mother so she gave up her child for adoption for a better life, plus some possible Romantic elements about emotions when man and woman fall in love, but that’s not the center of the story
Foul Language:
No foul language
Violence:
Light comical violence when children throw snowballs at their mother, but in a playful way, and she joins in
Sex:
No sex scenes or sexual immorality or sexually lewd content, but a couple kisses two times, and another couple holds hands
Nudity:
No nudity
Alcohol Use:
Light casual drinking shown at Christmas parties
Smoking and/or Drug Use and Abuse:
No smoking or drugs; and,
Miscellaneous Immorality:
There’s an implied divorce as an ex-husband is mentioned, but divorce isn’t glorified, plus teenager’s father is seen pushing his son too much to do what he wants his son to do, not what the son really wants, but in the end, he comes around and fully supports his son and is proud of him.

A CHRISTMAS LOVE STORY follows Kate, a retired Broadway performer turned youth choir leader, who’s been tasked to write an original song for the choir’s annual Christmas Eve performance. A new teenage volunteer, Danny, comes to help Kate, but instead joins the choir because of his wonderful voice. Meanwhile, Greg, Danny’s widowed architect father, is surprised to learn of his son’s talent and interest in performing. Refreshing and highly enjoyable, A CHRISTMAS LOVE STORY has a very strong Christian, morally uplifting worldview and is filled with Christ-centered Christmas Carols, a pro-life message, and a lesson about caring for others before yourself.

The movie opens with Kate practicing with her choir for the annual Christmas Eve performance. When a volunteer, Danny, enters the room, Kate has him watch practice until it’s finished. As the members are leaving, Kate hears Danny at the piano playing and singing the song they were just practicing. Danny is very good, so Kate invites Danny to be part of the choir for the upcoming performance.

The next day, Kate’s late for practice because she’s picking up costumes for the performance. In a hurry, she jumps into a ride share car. In the car, she meets Greg, a fellow rider who’s on his way to meet his son at a new financial startup business where his son volunteers. The two end up going their separate ways when Kate is close to her final destination.

Kate arrives and begins practicing with her choir when Greg walks in looking confused when he sees his son singing with the choir. He tells Kate that Danny’s too busy to participate, and he takes his son and leaves, even though Danny wants to stay.

Kate doesn’t want to give up that easily on Danny participating in the choir. So, she begins to call Greg to convince him it would be a good thing for Danny. When he doesn’t return her calls, she decides to drive to their house in Connecticut and talk to him in person.

Greg welcomes Kate into his home, and she finally convinces him to allow Danny to sing. Right before Kate arrived to talk, Danny and Greg were going to search for a Christmas tree. So, when Danny sees Kate and finds out the good news, he asks if Kate could join them for the day looking for trees, and she does.

Hunting for Christmas trees bonds the three of them together, especially Kate and Greg, and a friendship begins to form. When a snowstorm stops Kate from getting home that evening, she ends up staying in the guest room at the house. She heads back to the city, however, before Greg and Danny wake up.

From here on out, Kate, Greg and Danny begin to spend more time together. Of course, Greg and Kate seem to be forming a budding romance. They get close when Kate opens up about not having children of her own. She tells Greg she gave up the one child she did have for adoption, because she wasn’t ready to be a mother when she was pregnant.

The holiday spirit of family, and her recent conversation about the child she doesn’t know, encourage Kate to contact the adoption agency to try to find her child. She’s stunned when she finds out who her lost child is, and it also complicates her romance with Greg. The complication leads Kate to worry about the future and make a bad decision. Will her romance with Greg have a happy ending?

A CHRISTMAS LOVE STORY is a refreshing, enjoyable Christmas movie that focuses on family, singing and caring for others, but still includes the romance everyone loves. The vocals of Kristin Chenoweth, who plays Kate, shine forth as she acts and sings her way through the movie. Scott Wolf and Kevin Quinn as Greg and Danny also deliver appealing performances. Kevin does indeed have a great singing voice as well.

Happily, A CHRISTMAS LOVE STORY has a very strong Christian, moral worldview. For example, all the Christmas Carols, even a new original one, are Christ-centered. The movie also includes Angel decorations, and the main female character, Kate, wears a cross necklace almost throughout the entire movie. Eventually, love conquers Kate’s fear and anxiety about the future. A positive pro-life stance on adoption and an emphasis on the importance of caring for others before yourself also shine through in A CHRISTMAS LOVE STORY. It’s one of the Hallmark Channel’s best Christmas movies, which makes it one of the Channel’s best movies, period.