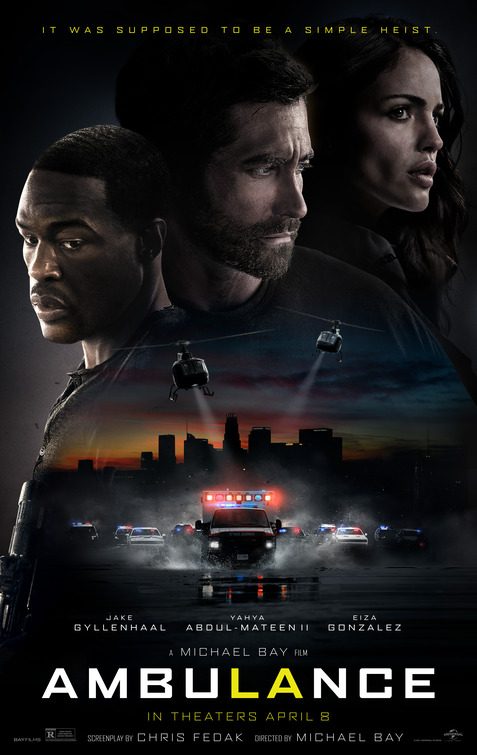 AMBULANCE is an intense action thriller. Danny and Will are two brothers. Danny is white, but Will is black and was taken in by Danny’s father when they were boys. Will’s wife needs an expensive operation. He goes to Danny, an unrepentant bank robber, for money, but Danny convinces Will to go with him and some men on a major bank heist in downtown Los Angeles. A naïve young police officer interrupts their plan, and his partner begins a violent shootout. To escape, Danny and Will hijack an ambulance and its female paramedic after one of them shoots the young officer.

AMBULANCE is a wild roller coaster ride through the streets of Los Angeles. In fact, the movie is partly an ode to the city’s streets. Director Michael Bay doesn’t provide moviegoers with just action, thrills and chills, however. He and screenwriter Chris Fedak also insert some heartfelt, profound reflections about life and death issues. Ultimately, the movie’s message is that life is precious. That said, however, AMBULANCE also has many strong obscenities and some extreme, bloody violence. So, MOVIEGUIDE® advises extreme caution.

AMBULANCE is an intense action thriller about two brothers of different races, one of them adopted, who are involved in a major bank heist in downtown Los Angeles that turns violent but who hijack an ambulance and its female paramedic when one of them shoots a young police officer. Directed by Michael Bay, AMBULANCE contains some heartfelt, profound reflections about life and death issues, not just action thrills, but the editing, sound and storytelling don’t always work, and the movie has many strong obscenities and excessive bloody violence.

The movie opens and closes on mundane images of the “City of the Angels,” Los Angeles. The beginning also shows a black boy and a white boy meeting on the streets and playing together. It then cuts to two paramedics, a female named Cam and a man named Scott, who get a call to attend a little girl, Lindsey, trapped in a vehicle after a major accident. Sadly, the girl’s stomach has been pierced by an object. Cam holds Lindsey’s hand as the firemen use a saw to free the girl. She then tells Lindsey’s distraught mother to keep holding her daughter’s hands as they wheel Lindsey into the ambulance and drive her to the hospital.

Cut to a black veteran, Will Sharp, trying to get insurance to cover an important major surgery for his wife, Amy, who’s holding their newborn son. The woman on the line hangs up on Will, but he lies to his wife, saying that he’s gotten the funding for her surgery. Apparently, he doesn’t want her to worry. Will then tells Amy he’s going out for a job interview. In reality, he’s going to see his criminal brother, Danny, and ask Danny to lend him the $231,000 for Amy’s surgery.

Danny is white, and he and Will turn out to be the two young boys playing together in the opening. Danny’s biological father took Will into the family. It turns out that their father was a notorious, ruthless bank robber, and Danny has followed in his footsteps, though he claims to be less ruthless than their old man.

Danny, who owns a garage for wealthy car owners, tells Will he doesn’t have any money to lend. However, he tells Will that he’s gonna need him for a major bank heist in downtown Los Angeles that he and some guys are planning to do that very afternoon. The payout is millions of dollars, Danny says, meaning that Will’s wife will have more than enough money for her surgery.

Of course, the bank heist goes terribly wrong when a young white cop named Zach, fresh from the Police Academy, shows up, wanting to speak to a female teller inside to ask her out on a date. Zach’s police partner, Mark, had goaded him that morning to ask the girl out. Danny explains that the bank has had to close for a couple hours for some kind of inventory, but the cop won’t take no for an answer. So, reluctantly, Danny lets Zach into the bank, and the camera shows that Danny and his men have forced some bank employees and customers behind the counters, with guns to their heads. In talking to the pretty bank teller, however, Zach gets suspicious, but Danny gets the drop on Officer Zach and takes him hostage.

Shortly thereafter, Zach’s partner starts wondering what’s taking Zach so long. He sees Zach being ushered out the back door by Danny’s men, who are ready to split with the money. He decides to pull his gun and stop the bank heist. Meanwhile, some undercover policemen somehow have gotten wind of Danny’s big heist, and they’ve been waiting in unmarked cars outside the bank to make their move.

Of course, the actions by Zach’s partner alert the undercover cops, and, suddenly, all hell breaks loose, with cops firing at Danny and his men and vice versa. With Danny carrying half the loot, $16 million, in a large backpack, Danny and Will take control of Zach and rush him out the back way through the large bank’s parking garage. However, Zach sees an opening and starts fighting Danny. Will fears for his brother’s life, so he shoots Zach twice.

Danny and Will leave Zach’s side, but their way out of the garage is blocked by police. They start to go back, but Zach’s partner arrives and calls for an ambulance to take care of Zach. Naturally, Cam and Scott are the ones to answer the call. Zach’s partner helps put Zach on a stretcher and load him into the ambulance, but he accidentally drops his gun onto Zach’s stretcher.

At this point, Danny and Will appear, knock out Scott and commandeer the ambulance with Zach and Cam inside. With Will driving, and wearing Scott’s paramedics vest, the ambulance leaves the scene. Eventually, however, the police figure out what’s happened. Meanwhile, inside the ambulance, Danny and Will order Cam to keep Zach alive. If they can’t get away, they figure that going to prison for killing a cop is the last thing they want to do.

The police are now hot on their trail. So, it looks like Danny and Will won’t be able to get away from the cops. However, Danny has a few tricks up his sleeve. And, Will is used to driving in dangerous, tense situations because of his military service overseas in Middle Eastern war zones.

Based on a 2005 Danish movie, AMBULANCE is a wild roller coaster ride through the streets of Los Angeles. In fact, the movie is partly an ode to the city’s streets in all their amazing, sometimes dangerous, sometimes colorful, glory. Director Michael Bay makes this clear when he has the opening and closing credits stress the LA in the movie’s title.

Bay doesn’t provide moviegoers with just action, thrills and chills, however. He and screenwriter Chris Fedak also insert some heartfelt, profound reflections about life and death issues. For example, the movie’s opening makes clear that Cam, the female paramedic, doesn’t want to get too involved in the outcome of the people she treats on the streets and in her ambulance, much less their lives. She considers her job as just leaving the patients alive on the streets or bringing them alive to the hospital. Her job ends there. By the movie’s end, however, Cam has let herself become involved because she’s had to save Zach’s life a couple times and because she’s become wrapped up in the tension between Danny and Will, who, throughout their ordeal, has tried to stop his brother from being as ruthless as their father. As a result, Cam becomes a more compassionate person and decides she can’t sit idly by while moral and physical chaos reigns.

AMBULANCE also contains some funny moments to break the tension. For instance, at one point, Cam has to call an old doctor boyfriend to get some advice on how to take out the second bullet that’s hit Zach. Her doctor friend, however, has to call some trauma doctors out on the golf course to help.

In the end, the conflict between Will and Danny’s different approaches to survival reaches a boiling point. Will they be able to reconcile their differences?

AMBULANCE is put together pretty well. The characters are well-written. Also, most viewers will find the movie engrossing and even absorbing. However, the editing, sound and storytelling don’t always work. For example, the editing is a little too frenetic and chopped up in places. It took MOVIEGUIDE®’s reviewer out of the story’s flow and may do so with other viewers. Also, in the beginning, Danny’s cajoling for Will to go on the heist seems to convince him too easily to participate. The story also has some other apparent plot holes and unbelievable situations and dialogue.

The final message of AMBULANCE seems to be that life is precious. It also strongly suggests that you will be more fulfilled and have a happier, better life if you believe that life is precious and act accordingly. Despite his mistakes, Danny’s brother, Will, keeps siding in favor of life. Danny, however, isn’t so reliable when the situation comes down to his life or death, and he eventually pays the price for that. During the resolution of their conflict in the third act, there’s a haunting image of Danny and Will playing sheriff and outlaw as little boys. That image and other images at the very end provide a moving, fitting coda to the story.

Ultimately, therefore, AMBULANCE has a strong pro-life, moral worldview. However, the movie also has many strong obscenities and some extreme, bloody violence. It also has some moral relativism. So, MOVIEGUIDE® advises extreme caution.