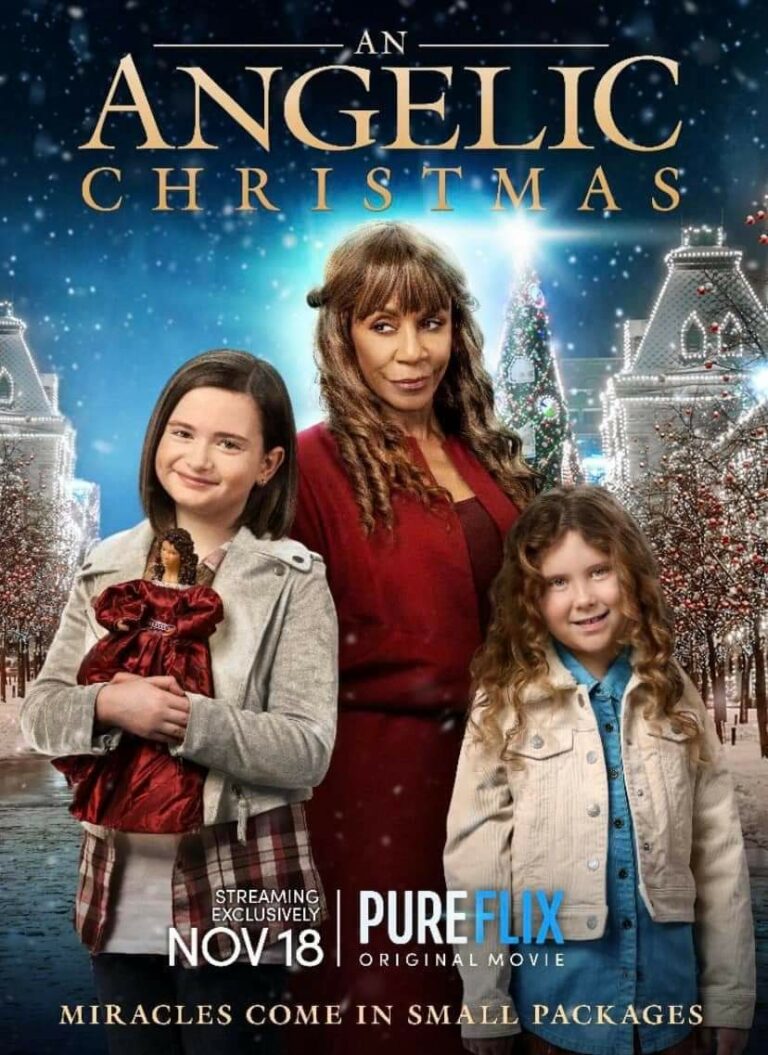 AN ANGELIC CHRISTMAS is an endearing family drama on Pure Flix about loss, grief, forgiveness, and transformative change, with God’s help. In the story, a forgetful angel in the making named Celest helps a widowed mother, Samantha, and her two daughters, Delaney and Lauren, move to and transform a surprisingly somber town. The family is grieving the recent loss of their husband and father, who was active in the U.S. Navy. They encounter the wealthy town Scrooge, who rebuffs their overtures of friendship and tries to stop them from putting together an impromptu Christmas Eve celebration at the local town center.

AN ANGELIC CHRISTMAS is a delight to the eye and ear. It has a compelling script, excellent acting, quality camera work, and irresistible unpredictability. It successfully keeps viewers surprised and engaged. Like IT’S A WONDERFUL LIFE, AN ANGELIC CHRISTMAS doesn’t overtly promote a Christian worldview. However, it has a heartwarming church scene and two expertly placed Christmas carols, including “Joy to the World.” Ultimately, AN ANGELIC CHRISTMAS tells a redemptive story that extols kindness, love, repentance, forgiveness, emotional healing, and reconciliation.

(CCC, BBB, FR, M):
Dominant Worldview and Other Worldview Content/Elements:
Very strong Christian, moral worldview stresses the healthy and transformative power of honest communication and loving acts of surprising kindness, and extols kindness, love, repentance, forgiveness, emotional healing, and reconciliation, plus two Christmas carols are partly sung (namely, “Hark, the Herald Angels Sin” and “Joy to the World”), but the depiction of guardian angels interacting with assigned families has no biblical basis in Christian scriptures;
Foul Language:
No foul language;
Violence:
No violence;
Sex:
No sex;
Nudity:
No nudity;
Alcohol Use:
No alcohol use;
Smoking and/or Drug Use and Abuse:
No smoking or drugs; and,
Miscellaneous Immorality:
Some dysfunctional family elements regarding the existing family, after which the town is named, daughter and mother vehemently disagree about daughter’s choice of a fiancé, daughter leaves, and the mother is not only miserable, but wants the entire town “to feel my pain” and uses her power to quash any reason for town joy.

AN ANGELIC CHRISTMAS is an endearing family drama streaming on Pure Flix about loss, grief, forgiveness, and being the change you want in your world, all with God’s help, which, in this particular case, comes via angels. Viewers both young and old, and everywhere in between, will find inspiration and ideas through AN ANGELIC CHRISTMAS regarding the healing of life’s hurts, whether for themselves, or for others. AN ANGELIC CHRISTMAS displays the redemption that can happen in all these sets of relationships when God is invited to participate. It includes the recent loss of an active duty military dad; the new life his widow and two young daughters set out to forge as new residents of a small town; a 20-year-old wound of an argument and resultant estrangement of a mother and her adult daughter; and, the impact of the latter on an entire town, which is the namesake of that family.

The opening scene of AN ANGELIC CHRISTMAS offers voice-over narration for the on-screen visual of a car trip, from aerial shots of driving on picturesque fall and winter mountain roads, to the auto interior of daughters Delaney and Lauren with their mother, Samantha, driving. The narrator, who turns out to be the “Chief Angel” in the movie, lets viewers know that “this family is in need of some Spirit,” as does the entire town they’ve just entered to be their new residence.

The family’s need is portrayed right away as, in the next few minutes, in three separate scenes, the oldest daughter Delaney and her widowed mother, Samantha, pause emotively with photos and mementos of Alex, the late father and husband, a member of the United States Navy. Later, the movie reveals that Alex died only six months previously. So, their grief is still fresh, particularly since it will soon be their first Christmas holiday without him. Amplifying the grief is the fact that Christmas was Alex’s favorite holiday.

Delaney sneaks out of the house with her younger sister, Lauren, on a secret shopping trip downtown to buy Christmas decorations in honor of their father. Though a musical, dancing Santa interests Delaney, it’s the talking Christmas Angel tree topper she chooses to bring home.

Early the very next morning, a stranger is waking up Delaney. It’s the Christmas Angel, now off the tree top and life-size, again now explaining to Delaney that she, Celest by name, is a guardian angel in training trying to earn her wings on her first assignment. The only problem is, Celest doesn’t know what the exact assignment is. All she knows is that since Delaney’s the only person who can hear her speak, it must involve Delaney.

The circle widens, first as Celest is able to answer mom Samantha’s prayer for help, then on to their seemingly unfriendly town, McCattyville. Meanwhile, Samantha and the girls bake Christmas cookies and pleasantly surprise people on downtown streets with their kindness. One person rejects their gracious offer, however, founding-family resident Mrs. McCatty, who takes her gifted bag of cookies and immediately throws them in a nearby curbside trash can. This proves to be the first of a handful of run-ins between the angel-guided family and the “bah humbug” minded Mrs. McCatty. The confrontations culminate with Mrs. McCatty pulling her founding-family power card with City Hall, to cancel an impromptu Christmas Eve celebration conceived by Samantha and her girls at the town center.

AN ANGELIC CHRISTMAS is a delight to the eye and ear. The movie has believable professional acting and quality camera work on well-designed sets, both indoors and outside. The occasionally choppy storyline actually proves to provide irresistible unpredictability, successfully keeping viewers surprised and engaged. The script, even with two eloquent soliloquies, keeps the pace moving in this shorter than usual (72 minute) feature. Kudos go to actress Karen Abercrombie of WAR ROOM and SELFIE DAD, who not only plays the angel Celest, but also earns writing and executive producer credits for AN ANGELIC CHRISTMAS, along with the involvement of her own film production company, Earth Mother Entertainment. As the angel, Karen delivers some very poignant, emotionally powerful dialogue about the challenges of life and the importance of love.

The movie’s dominant worldview is strongly moral and Biblical, stressing the healthy and transformative power of honest communication, loving acts of surprising kindness, forgiveness, and divine presence in everyday life. Like IT’S A WONDERFUL LIFE, AN ANGELIC CHRISTMAS doesn’t overtly promote a Christian worldview. Also, there is no biblical basis for the concept of a guardian angel who’s assigned to interact with one family. However, one scene unfolds in a church and two Christmas carols, namely, “Hark, the Herald Angels Sing” and “Joy to the World,” are partially sung.

So, AN ANGELIC CHRISTMAS is a quality, family-friendly movie that could spark deeper conversations and study about the actual role of angels as portrayed in several vital Bible stories, including the Christmas verses found in the Gospels of Matthew and Luke. Also, families with children will find it easy to relate to the characters in AN ANGELIC CHRISTMAS. In addition, families who have lost family members, including military families, may find the movie helpful in procession their own grief.

Eventually, AN ANGELIC CHRISTMAS tells a redemptive story that extols repentance, forgiveness and reconciliation. As one character says at the end, “We all have the power to be angels by spreading love, family, and community in our lives.”