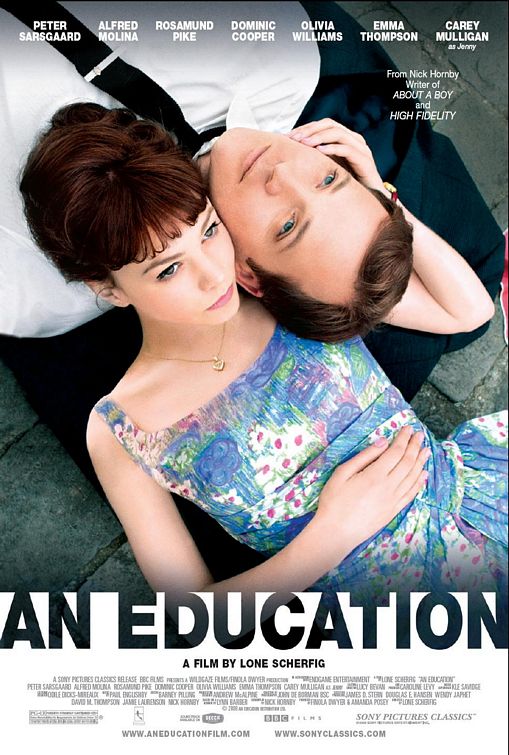 Set in Britain in 1961, AN EDUCATION is the story of Jenny, a high school senior whose plans to attend Oxford are jeopardized when she meets David, a wealthy older man who introduces her into a “high society” lifestyle. David proposes to Jenny and she agrees, dropping out of school, destroying her chances for Oxford. Then, Jenny discovers David is married. She confronts him, and he promises to get a divorce. However, Jenny leaves him. She discovers that David has had many teenage girlfriends, even fathering children with them. Jenny is not allowed back into school. She humbles herself and asks for help from her teachers to prepare for the exams she needs to take to get into Oxford.

The tone of AN EDUCATION is light and pleasant. Eventually, Jenny makes the right decisions so the movie has a moral center. However, along the way, Jenny lies to her parents, quits school, smokes, drinks, and has an affair with an older man. Thus, extreme caution must be exercised because of the sinful nature of these acts. This is a troubling story, but it ends well. Ultimately, Jenny’s education is a moral one.

(BB, PaPa, LL, S, N, AA, D, MMM) Ultimately strong moral premise and worldview as teenage girls explores pagan, hedonistic lifestyle; three mild obscenities, including one British obscenity, and seven profanities; no violence; implied sex between older man and teenage (minor) girl and discussion of losing virginity when turning 17-years-old; nude classical painting; much drinking of alcohol including by a teenage girl; much smoking including by a teenage girl; and, lying to parents, racism, negative father role models though he does redeem himself, stealing of art, con games.

Set in Britain in 1961, AN EDUCATION is the story of Jenny, a high school senior with sights set on attending Oxford. Her plans are jeopardized when she meets a wealthy, older man who introduces her into a “high society” life.

Jenny is an exceptional student who’s pushed by her father to excel so she can get into Oxford University. Jenny works hard but dreams of going to Paris, reading great literature and listening to popular music.

By chance, Jenny meets David, a man in his early thirties. They slowly start having a relationship. He is wealthy and introduces her to his two friends. They attend concerts, jazz clubs and elegant restaurants. Jenny lies to her parents about where she’s going with David, though David is able to charm her parents, talking them into letting him take her to Oxford to meet a former professor, C.S. Lewis.

Of course, David doesn’t really know Lewis, but it is a lie to let David, Jenny and the two friends have a weekend in the country. David is even able to get her parents to agree to a trip for he and Jenny to Paris.

In Paris, as Jenny has always dreamed, she turns 17-years-old and loses her virginity to David. She learns that David is actually an art thief and con man and also buys real estate, moves black families into the buildings and then buys surrounding real estate at a reduced rate. He justifies it as what finances the great life he and Jenny can have.

David proposes marriage to Jenny, and she agrees, dropping out of school, destroying her chances for Oxford. Since she’d be marrying a wealthy man, her parents agree.

Jenny is not allowed back into school. So, she humbles herself and asks for help from her teachers to prepare for the exams she’d need to take to get into Oxford.

AN EDUCATION’s tone is both light and pleasant. Even Jenny’s seduction into the rich lifestyle is all about nice restaurants and enjoying herself. Peter Sarsgaard as the charismatic David gives a great performance of a charming, but ultimately troubled, man. The story unfolds at a somewhat leisurely pace.

Ultimately, Jenny makes the right decisions and the movie has a moral center. However, along the way Jenny lies to her parents, quits school, smokes, drinks, and engages in sexual relations with an older man.

The sexual scenes are only implied, and there is no nudity (except for in a classical painting). Discernment, however, must be exercised because of the nature of their relationship. At one point, Jenny is unwilling to engage in sex until she turns 17 and is in Paris. David asks her to disrobe her top so he “can see”, and she does.

Jenny’s father is a negative role model at first, complaining about the cost of education, controlling Jenny’s actions, and simply wanting her to marry so she is no longer his responsibility. He does come around and asks for forgiveness for the way he treated her and says that he forgives her for lying to him.

This is a troubling story, but happily ends well. Since it takes awhile to get there, however, MOVIEGUIDE® advises extreme caution.