"Christ’s Gospel Is Stronger Than Evil" 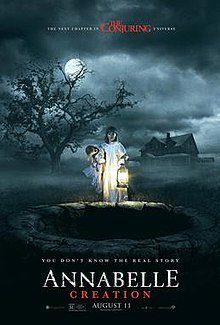 ANNABELLE: CREATION is the prequel to the 2014 movie ANNABELLE. It tells the story of a dollmaker and his wife who lost their beloved daughter. Twelve years later, they let six orphan girls and a nun live in their house, even though a demon is trying to manipulate the entire house. One of the orphans, Janice, is crippled from polio and finds the life-size doll, Annabelle, the dollmaker made for his daughter. Soon, the demon manipulating the doll torments the girls and the nun. Will they get out of the house without harm?

ANNABELLE: CREATION is an extremely well-made horror movie. The music and pacing are incredible, and the plot takes unexpected turns that don’t usually occur in other modern horror movies. ANNABELLE: CREATION has a lot of Christian faith in it. There are positive mentions of Jesus, prayer, Scripture references, and statements that the Gospel is stronger than evil. The battle against the demon is left unresolved, however, probably to make way for a sequel. Ultimately, the scares in ANNABELLE: CREATION warrant strong or extreme caution, especially for sensitive viewers.

(CCC, BBB, O, L, VV) Very strong Christian, moral worldview with some scary occult elements, showing good battling evil in the form of a demon and clearly favoring good over evil, positive mentions of Jesus, prayers are said, crucifix and crosses are shown all around the house, positive comments about faith and how we feel God, it is said that the Gospel is stronger than evil, and a rosary is involved, but there’s no resolution to the battle between good and evil (probably because of intentions to make a sequel and because the movie itself is a prequel to another movie); one light obscenity and no profanities; strong, scary, spooky violence includes girl falls down stairs, man is killed, woman’s face is marred, woman is killed and torn apart, and [SPOILERS] demon torments girl and demon possesses child; no sexual content; no nudity; no alcohol; no smoking or drug use; and, nothing else objectionable.

ANNABELLE:  CREATION is the prequel to the 2014 movie ANNABELLE, telling the story of a married couple who lost their daughter and let orphans come live in their house, even though a demon is trying to manipulate the entire house. ANNABELLE:  CREATION is an extremely well-made horror movie and includes lots of strong positive Christian content favoring good defeating evil, but the battle is left unresolved, probably to make way for a sequel or two.

A dollmaker named Samuel has a happy life in the country with his family, including his wife, Esther, and daughter, Bee. One day, after the family goes to church, their car breaks down on the side of the road and another car speeds past them and hits their little daughter Bee. Bee is killed, and the parents are devastated. Samuel had even made a life-size doll for Bee named Annabelle.

Twelve years later, Samuel and Esther have invited six orphan girls and their caretaker, a nun. One of the girls named Janice is crippled from polio and doesn’t know how she’s going to manage the stairs in the house. Happily, however, Samuel installed a mechanical chair to go up the stairs for his wife, who also has medical issues. While the other girls are playing and running outside, Janice is upstairs exploring and finds a locked room, which leads Samuel to tell her not to enter.

Night comes and Janice is still curious about the room, especially when she receives a mysterious note saying, “Find me” under her. Janice follows the note and sees the room is unlocked, so she goes into the room. The room is filled with dolls, a tea set and even a doll house, a replica of the house where they are living. Interestingly enough, Janice finds a key to a closet door and decides to open the door. In the closet is a cross, pages of the Bible and a large doll, the same doll that Samuel had made for Bee many years before, the doll Annabelle.

Every night after that, Janice finds notes to go in to the room and sees the doll in new locations. One night Janice sees a figure looking like Bee, which tells her she wants her soul. Janice tries to run away and gets injured. The next day Janice tells the nun what happened and that she believes it is an evil spirit.

Will the orphan girls get out of the house without harm?

ANNABELLE:  CREATION is an extremely well-made horror movie. The moments where you think predictable horror movie things will happen, they don’t happen, but other, unexpected scary things do happen. The music brilliantly adds to the tension, getting louder and louder and then dropping off immediately with silence for minutes.

ANNABELLE:  CREATION has a lot of faith in it and therefore has a Christian, biblical, moral worldview. The movie has prayer, scripture and crosses. It also tells how priests do exorcisms and, even better, says the Gospel is stronger than evil. That said, ANNABELLE:  CREATION is really a prequel to a movie released a few years ago, so the demonic evil isn’t totally defeated and thus still lives on after this movie prequel ends. Ultimately, the scares in CREATION warrant strong or extreme caution, especially for sensitive viewers.