"Entertaining and Redemptive But Flawed" 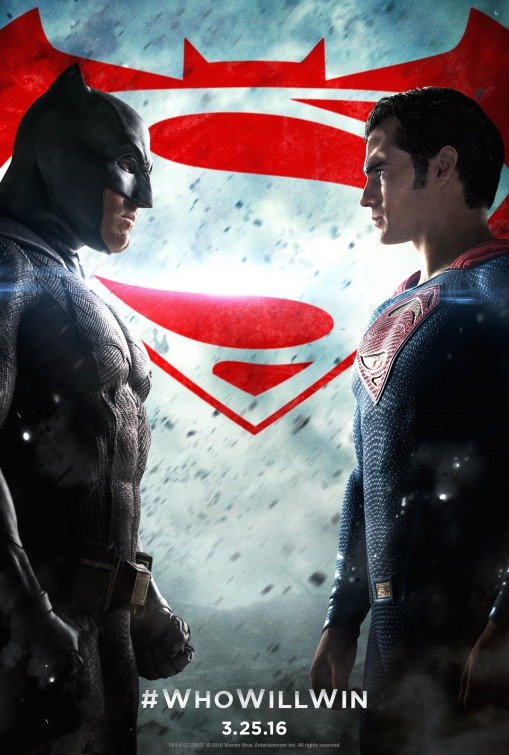 BATMAN V SUPERMAN: DAWN OF JUSTICE opens with Bruce Wayne witnessing the destruction caused when Superman fought General Zod during the previous movie, MAN OF STEEL. Some of Bruce’s employees in his financial headquarters in Metropolis die as a result. Eighteen months later, Bruce’s fear and suspicion of Superman’s unlimited power has grown. When another incident involving Superman results in more innocent deaths, Bruce decides to weaponize some green kryptonite to kill Superman. However, both men are being manipulated by the power-mad, and insane, Lex Luthor, who wants to destroy them both.

BATMAN V SUPERMAN is very entertaining, with great character arcs, exciting action and evocative dialogue. Ben Affleck is very good as Bruce Wayne/Batman, and Henry Cavill may be even better as Superman/Clark Kent. Also, BATMAN V SUPERMAN has a strong Christian, redemptive, moral worldview, with many overt affirmations and positive references to God. Furthermore, the villain, Lex Luthor, turns out to be a hateful atheist. Sadly, BATMAN V SUPERMAN has several gratuitous profanities, an implied sex scene, and some humorless, pretentious, overly violent, bloated qualities. So, extreme caution is advised.

(CC, BB, H, Ev, P, LL, VVV, S, NN, A, M) Strong Christian, redemptive, moral worldview with strong, overt, positive references and appeals to God, comparisons to Superman as a Savior for people, “Amazing Grace” is played at a key moment, images of crucifixes, sacrifice is extolled, doing good is extolled, fighting evil is extolled, saving lives is extolled, and the murderous villain is a nihilistic humanist and selfish materialist desiring power who makes statements opposing God and any other religious beliefs or ideals, but mitigated by Batman’s cynical, jaded humanist attitude (though Batman later expresses shame for some of his behavior) and mitigated by an implied sex scene between Lois Lane and Clark Kent, plus a well-known scientist appearing as himself mentions evolution, but evolution doesn’t figure in the plot, and there are a couple brief Pro-American, patriotic displays; seven obscenities, five strong profanities (using GD or Jesus) and two light profanities; lots of strong and some very strong/intense action violence includes intense hand-to-hand combat and fighting, characters are flung against concrete walls and pillars, characters are crunched by large hard objects, a couple car chases with vehicles being smashed and flung upside down, hard punching, hard kicking, characters are pierced by objects two or three times, Wonder Woman uses her lasso, energy blasts, explosions large and small, buildings destroyed, characters slam into buildings and wreck their outside walls, point blank shootings, women discovered held in a cell by slave traffickers, women’s lives are threatened, little girl loses her mommy in a collapsed building, terrorist bomb explodes in a chamber full of people; implied fornication after Clark Kent kisses an apparently nude but underwater Lois Lane who’s taking a bath and Batman rescues some women imprisoned in a cell who are apparently being held by a sex trafficker, so the words sex trafficking are used in one or two lines, but nothing salacious shown; a flash of partial upper female nudity when Lois Lane is talking to Clark Kent while she’s taking a bath, some female cleavage and upper male nudity in a few scenes; alcohol use; no smoking or drugs, though Superman is weakened by gas made from green kryptonite; and, villain kidnaps woman and tries to blackmail Superman by threatening to kill her, smuggling, villain frames Superman, issues of vigilante action are debated but ultimately in a positive way that provokes serious thought, terrorism but rebuked, and angry man vandalizes Superman’s statue by spray-painting “False God” on it.

In BATMAN V SUPERMAN: DAWN OF JUSTICE, Bruce Wayne has grown suspicious and fearful of the Man of Steel’s unlimited power, but Lex Luther, a mad, extremely wealthy tech wizard, has a plan to take advantage of that fear and suspicion to destroy both men. BATMAN V SUPERMAN: DAWN OF JUSTICE is often very entertaining, with some great character arcs and strong affirmations and redemptive references to God, but it also has several strong, gratuitous profanities and is sometimes too humorless, pretentious, overly violent, and bloated.

The movie begins with the ending of the last Superman movie, MAN OF STEEL, but told from Bruce Wayne’s point of view. Bruce, aka the Batman, is driving to visit his company, Bruce Wayne Enterprise’s, financial headquarters in Metropolis just as the destructive battle between Superman and General Zod begins. As Bruce races toward the building, he calls his headman there and orders him to evacuate the building. However, not everyone survives the destruction, including a little girl’s mother. This causes Bruce to blame the Man of Steel.

Eighteen months later, Bruce has grown even more angry, suspicious and fearful of Superman’s unlimited power. Many other people have also grown suspicious and fearful. An incident in an African village involving Superman, Lois Lane and a Muslim terrorist, where some innocent bystanders were killed, has fed that fear and suspicion, even though Superman is still saving many people trapped in dangerous situations.

Meanwhile, Lex Luthor, the mad heir of LexCorp., a high tech firm that also deals in military weapons and technology, has found a large sample of green kryptonite. He’s having it secretly shipped to Metropolis. Lex has also gained access to General Zod’s dead body. Experimenting with the green kryptonite and Zod’s body, Lex discovers green kryptonite can cut the flesh of the Planet Krypton’s visitors to Earth, including Superman.

Bruce Wayne finds out about the kryptonite and eventually steals it from Lex. When Superman is blamed for failing to stop a terrorist bombing, resulting in more innocent deaths, Bruce decides to weaponize the kryptonite to kill the Man of Steel. What he doesn’t know is that Lex Luthor has been manipulating both men (and their enemies) all along, hoping to destroy them both.

The good outweighs the bad in BATMAN V SUPERMAN.

The movie is very entertaining, with some great character arcs, exciting action and evocative dialogue. The ending also sets up the next movie well (it’s supposed to center on Batman and Superman’s formation of the Justice League). Ben Affleck is very good as Bruce Wayne/Batman, and Henry Cavill may be even better as Superman/Clark Kent.

The movie does, however, get slightly pretentious at times. There are also a few slow moments and lengthy fight scenes that could have been trimmed. Bruce Wayne has a couple nightmares about the murder of his parents and their funeral, but he also has a strange vision about a potential future where Superman has destroyed Earth’s cities and rules the planet with what looks like a fascist army. The circumstances of this vision are silly and confusing, however, so the scene adds nothing at all to the movie. In addition, the movie fails to take full advantage of a Wonder Woman character who shows up. People in the audience wanted to clap for her at one point, but the scene was too anticlimactic. BATMAN V SUPERMAN also introduces three other future Justice League heroes, Aquaman, the Flash and Cyborg, but those three references are also too brief and inconsequential. Consequently, BATMAN V SUPERMAN sometimes just bites off more than it can chew. This can really be seen in the ending, which is good but also a bit repetitious and disappointing.

Thematically, BATMAN V SUPERMAN has a strong Christian, redemptive, moral worldview, with several strong, overt and positive references and appeals to God. Also, Superman is compared to a savior, and an instrumental version of “Amazing Grace” is played during one important scene. At one point, however, the villain, Lex Luther, says he decided there was no God because he couldn’t reconcile in his mind the existence of suffering and evil with the omnipotence and goodness of God. This is a common argument against Theism, but it’s easily refuted by several answers, including the “free will defense.” Sadly, the movie makes no overt attempt to answer the atheist villain’s complaint. However, the third act and ending implicitly give one answer. Thus, one reason God allows suffering and evil in the world is because God wants human beings to take action to alleviate pain and suffering, and to stop evil from happening or stop it from continuing. This is exactly what heroes (including comic book heroes) are supposed to do. Also, since the villain in BATMAN V SUPERMAN turns out to be the atheistic, nihilistic, selfish Lex Luthor, who murders innocent people and wants to destroy the heroes, the whole movie may be seen as an argument for God and a call for moviegoers to take a stand against selfish, nihilistic atheists.

Regrettably, BATMAN V SUPERMAN’s redemptive worldview is undercut by several strong profanities misusing the names of God and Jesus. In addition to some very strong, intense violence, there’s also an implied sex scene between Lois Lane and Superman as Clark Kent. Early in the movie, Clark comes to her place to cook dinner for Lois and finds her taking a bath. Instead of leaving, he sits next to Lois and discusses some things. He then climbs into the tub with all his clothes on, kisses her and starts to undress. The movie cuts away, implying that they committed fornication.

The gratuitous foul language and sex scene in BATMAN V SUPERMAN damage the Superman brand. They turn what should be a family-friendly movie into a movie that’s not particularly family friendly. In his two Superman movies, Director Zack Snyder has pretty much skipped the romance between Superman and Lois Lane and gone straight to the sex. By doing so, he’s virtually eliminated the need for the Lois Lane character to be in any more Superman movies. Her character (including her relationship with Clark Kent/Superman) becomes decidedly less interesting if there’s no romantic tension or romantic repartee between her and the two halves of Superman’s personality.

Extreme caution is advised for BATMAN V SUPERMAN because of its offensive foul language, the intense violence and its unnecessary sex scene.