BATTLE OF THE YEAR

"Taking Back the Title" 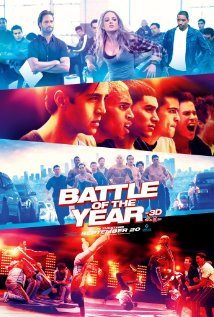 BATTLE OF THE YEAR is about a legendary basketball coach who agrees to train an unruly band of boys so the United States can regain the breakdancing championship it once held. The CEO of a hip-hop company believes the United States needs to regain the breakdancing crown it held 15 years ago. He hires legendary former basketball coach Jason Blake to create a team worthy enough to challenge top contenders like Russia and Korea. Tough but compassionate, Coach Blake has to unite a group of talented, but undisciplined, boys into a winning team.

The production quality of BATTLE OF THE YEAR is good, with notable performances by Josh Holloway and Chris Brown as the coach and a hot-headed dancer. BATTLE OF THE YEAR has a strong theme of commitment, perseverance, teamwork, and doing the right thing. This moral theme eventually surpasses the initial impetus for the story, which is to win. However, it’s diminished by too much foul language, so strong caution is advised. That said, BATTLE OF THE YEAR delivers an entertaining fusion of artistry, athleticism, history, heritage, and culture.

(BB, P, Ho, LLL, V, AA M) Strong moral worldview with some patriotic elements about doing the right thing, showing humility and overcoming struggle as a tough but compassionate coach spends three months training 13 boys to work together as a championship breakdancing dance team, while dealing with his own struggles, and a dancer admits he’s homosexual; 46 obscenities and three profanities spoken, plus several instances of dancers grabbing their crotch; fistfights at training camp and in France but no weapons or blood; no sex; no nudity; alcohol use and light alcohol abuse; no smoking or drugs; and, lying, trash-talking leads to fights, poverty, man has lost wife and child in car accident, protagonist is depressed because of family tragedy and drinks too much and often.

BATTLE OF THE YEAR is about a legendary basketball coach who agrees to train an unruly band of boys so that the United States can regain the breakdancing championship it used to hold nearly 20 years ago. BATTLE OF THE YEAR is entertaining, but it has too much foul language.

The story opens when Dante, a disgruntled CEO, expressing his frustration to his staff that it’s imperative they do whatever they can to keep breakdancing alive in America, where it started. The danger of not doing anything could mean the loss of an urban dance style that began in America but is still flourishing in countries like Korea and Russia. Dante thinks it could also lead to hip-hop eventually dying off too, which would be detrimental to the financial state of his company.

So, Dante needs to see the United States be a contender again in the world of breakdancing competitions, now dominated by hip-hop cultures in Korea, Russia, France, and other countries. He can think of no better person than his long time friend, Jason “WB” Blake (played by Josh Holloway). WB was once a great basketball coach, able to bring individuals together and build championship teams. Dante wants WB to win the Battle of the Year, which is the equivalent of the Olympics for breakdancing. The competition is held in France annually, and the United States hasn’t been a contender in 15 years.

Initially, due to a tragedy in his own life, WB is in a slump of depression and alcohol drinking, so he at first rejects Dante’s offer. Then, when WB changes his mind, Dante must agree to allow WB to coach and develop the team on his own terms.

After a select group of talented dancers are chosen, WB works with them and begins eliminating them one by one, until only 13 are left. WB is a tough but good coach who has his work cut out for him as he deals with the egos and attitudes of the dancers in the group who claim to be the best. Rooster and Do Knock are two of the best dancers, but they’re also the most volatile. When their inability to get along threatens the success of the whole team, they decide to work together to become a Dream Team and train to bring the championship trophy back to the U.S. where the dance form began.

The script is structured well and offers a couple unexpected twists in the plot. Casting is well done. Josh Peck as the assistant coach adds some comedy relief and humor to the story when the plot needs it. Josh Holloway as the head coach delivers a sincere performance, creating a believable quality character. Dancer and music artist Chris Brown, who plays Rooster, brings authenticity to his character’s role as a hot-headed leader who in time gains some humility and encourages the team forward. However, Caity Lota as the choereographer is not the most memorable. This isn’t to take away from the actual choreography of the Dream Team as well as the other teams they compete against. In fact, the movie’s choreography, including its athleticism and artistry, is nothing short of amazing.