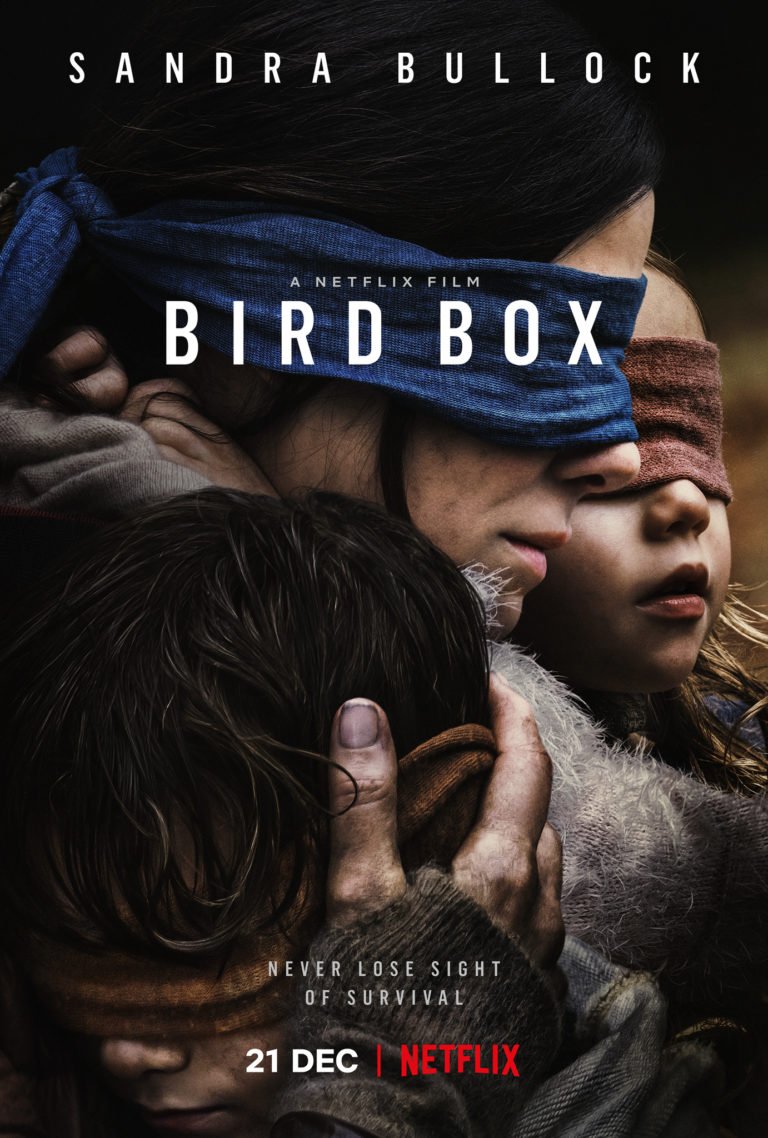 BIRD BOX is a harrowing movie based on a book. Mallory Hayes, played by Sandra Bullock, is a single mom who tries to survive in this apocalyptic movie where demons overtake the world and force everything that looks at them to kill themselves. This is a different role for Bullock, who’s most famously noted for her Oscar winning performance in THE BLIND SIDE and movies like GRAVITY.

This horrific sci-fi story will give Christian viewers a glimpse into what the end of the world may look like. Sandra Bullock and cast (including John Malkovich and some comical lightheartedness from Lil Rel Howery) deliver gripping performances. Viewers will sit on the edge of their seats from the first scene until the last. However, BIRD BOX has many objectionable elements. There’s no mention of God or prayer in this end of the world scenario, which seems odd considering the characters clearly identify the invaders as demons or evil spiritual creatures. This, along with high levels of violence, foul language and scenes of gratuitous lewd content, make BIRD BOX inappropriate and unacceptable for moviegoers.

(OOO, B, HH, LLL, VVV, SS, NN, MM):
Dominant Worldview and Other Worldview Content/Elements:
Dominant occult worldview of evil demons taking over signifying the end of the world, but, though humans acknowledge the demonic, and woman tries to protect her children, people live for self and only the strongest survive;
Violence:
Very strong and strong violence includes seeing demons causes people to commit suicide, woman bangs her head against a window, a woman walks in front of a bus, woman goes into a car engulfed in flames, a man being stabbed with scissors, several scenes of people being killed by guns and rifles, several cars slam into each other, one car slams into another car and flips in the air onto its side, people beaten up, one man attacks another man captivated by the demons throwing himself and the other into a freezer and blood pours from underneath the doorway; one woman walks through a second story window, a man is hacked with a machete then drowns himself in the river, two women give birth at the same time with one screaming from pain, several scenes of corpses lining streets, and one scene of car running over a corpse, calling it a “bump in the road”;
Sex:
Moderate level of implied sexual content including two scenes of sexual relations between a man and a woman, but one is implied;
Nudity:
One scene of sexual relations with naked couple, but genitalia and breasts are covered, one scene of a man with no shirt, a woman wears lingerie, two scenes with a woman’s pregnant belly;
Alcohol Use:
Brief alcohol use;
Smoking and/or Drug Use and Abuse:
No smoking or drugs; and,
Miscellaneous Immorality:
Lying, bitterness, destroying personal property, stealing, dysfunctional family relationships, and bad role models.

A two-hour fright fest awaits viewers of BIRD BOX, a horror movie about a mother, Mallory (Sandra Bullock), trying to save her son and daughter from demons or spirit animals, who, when looked at directly, make people commit suicide. The only way to save herself and her children is to take her unnamed children, boy and girl, in a canoe and ride blindfolded down the river. In this dystopian world, it’s kill or be killed. Although demons are never seen, they are heard, and their whispers are what make people look at the demons directly, causing them to commit suicide.

Told in flashbacks, the story first introduces Mallory as a pregnant single woman, when her sister takes her to the hospital for a check-up. There, they see a woman hitting her head against a glass window repeatedly. She and her sister flee, but then her sister’s eyes glaze over, and she crashes the car. The sister crawls out of the car and walks in front of a bus. Cars are blowing up, people are being beaten up and everyone is fleeing to get indoors.

Mallory finds a home with some Good Samaritans, who watch the news in horror as a state of emergency is called, and everyone is ordered to stay indoors. One of the people there, a novel writer, explains that these are demons or “spiritual creatures,” who possess people by preying on their deepest fears, sadness or weaknesses. As they whisper a person’s name, he/she follows the sound until psychotic behavior overtakes them, and they kill themselves or someone else. The audience follows along as Mallory and the others struggle to find food and other supplies to survive.

At a convenience store to which they drove using only the indoor cameras, Mallory finds a parakeet she takes with her to try to keep alive. As Mallory flees by water to save herself, she puts the birds in a box, the safest way for them to survive. After communicating with some people who assure her safety, Mallory, after witnessing the death of all her friends, travels through winding rapids and horrible conditions as she and the two children travel blindfolded, desperate to find safety.

Lil Rel Howery adds some comedic levity to this otherwise suspense-filled movie. Every scene holds its own surprise, where no one is safe and the audience never knows what is behind every door or outside lurking in the shadows. If viewers are looking for a movie filled with harrowing scenes and disturbing images, this movie will not disappoint. The plot is fast-paced, offering viewers a terrorizing thrill ride.

Lil Rel Howery’s comedy, however, is where the clean parts end. Shot mostly in dark, boarded up houses so no one can see outside, Christian viewers will liken many of the movie’s scenes to what an apocalyptic hell on earth would look like. Also, though humans acknowledge the demonic, and Mallory tries to protect her children, people live for self and only the strongest survive. BIRD BOX is also filled with violence and lots of strong gratuitous foul language, coupled with two scenes of gratuitous sexual content.