"In God We Trust" 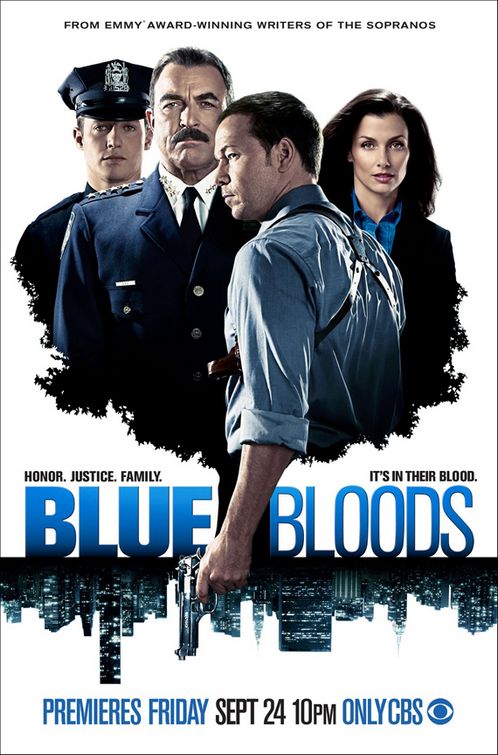 “Family Secrets,” the 2020 season finale of BLUE BLOODS, tells several family stories involving the Regan family. In one story, Detective Danny Regan must stop a man from getting revenge for the murder of his brother by a gangster who’s on trial. In another, Jamie’s wife, Eddie, gets involved in finding the mother of an abandoned baby left near the police precinct where they work. Finally, the Regan family discovers that the police commissioner’s murdered son, Joe, had a son he didn’t know he had who has also become a police detective. The boy’s mother asks Police Commissioner Regan to transfer Joe’s son to a less dangerous position.

“Family Secrets” is another well-written and acted BLUE BLOODS episode. In fact, it may be the most concisely written and directed episodes as well as one of the most thematically cohesive. The cast is perfect! The “Family Secrets” episode of BLUE BLOODS is great TV full of strong Christian, American and moral faith and values, but there’s some foul language and two intense scenes of violence. So, MOVIEGUID® advises caution for older children.

(CCC, BBB, PPP, L, VV, S, M):
Dominant Worldview and Other Worldview Content/Elements:
Very strong Christian, moral worldview, with very strong positive American values supporting justice, service, serving the public, becoming a policeman, and America’s religious heritage, includes positive Christian prayer, positive references to faith and trusting in God, and giving honor and worship to the Holy Trinity and Jesus Christ as Lord, plus motherhood, family, children, marriage, and love are celebrated in a low-key but effective way
Foul Language:
Three obscenities and two OMG exclamatory profanities
Violence:
Young man runs through a convenience store and runs outside to back alley where he’s shot dead in cold blood, young man holds a gun to the head of his brother’s murderer and hits him three times while two police detectives hold their weapons on him and order him to put down the gun, and the side of killer’s head is streaked with blood in that scene
Sex:
No sex scenes or crude sexual references, but woman confesses to premarital affair that produced a baby, but she hid her pregnancy from the father because she didn’t want to get married
Nudity:
No nudity
Alcohol Use:
No alcohol use
Smoking and/or Drug Use and Abuse:
No smoking or drugs; and,
Miscellaneous Immorality:
Woman tries to emotionally blackmail Police Commissioner, a woman’s jealousy and fear leads to betrayal and murder, and an evil gangster is insolent, but all are rebuked.

“Family Secrets,” the 2020 season finale of BLUE BLOODS, tells several family stories encountered by the Regan family, including their discovery that the police commissioner’s murdered son, Joe, had a son he didn’t know he had who has also become a police detective. “Family Secrets” is another well-written and acted BLUE BLOODS episode and includes positive, inspiring references to Jesus the Messiah, the Holy Trinity, prayer, justice, family bonds, and the American motto “In God We Trust.”

The episode opens with the police commissioner’s daughter, Erin Regan, questioning her investigator, Anthony’s, use of the district attorney’s office computers to check up on a delinquent young relative in trouble with the law. He reminds her she sometimes does favors in her job for her own family of police officers.

Meanwhile, Anthony gets a call from one of his informants, a young man named Geo, but the call is interrupted when Geo is murdered in cold blood. Geo was scheduled to testify against a gangster in a court case Erin is handling, but the police weren’t scheduled to give him protection until the very next day. Detective Danny Regan must find out how the gangster learned the identity of the informant. He must also find a way to prove that the gangster ordered Geo’s murder. Eventually, Danny must stop Geo’s brother, Teddy, from seeking revenge for his brother’s murder.

The morning Geo is murdered, Jamie and his wife, Eddie, find an abandoned two-day old baby in an insulated duffle bag near the precinct where they work. Eddie becomes intent on finding the baby’s mother. Knowing his wife, Jamie helps her search. As they search, Eddie ponders why the mother abandoned her baby, and why they were the ones to find the baby. The answer is surprising.

Finally, Police Commissioner Regan’s grandson, Sean, during a college DNA project, learns that he has an unknown adult cousin. By a process of elimination, the cousin must be Commissioner Regan’s son, Joe, who was murdered while working on the job 11 years ago as a policeman. The family discovers Joe had a son with a woman in the Police Academy for incoming officers, but she left the Academy when she got pregnant and never told Joe about the baby. She’s also never told her son who her father was, fearing that he would join the Regan family business, even though she named the boy Joseph after his father.

Commissioner Regan learns that the woman’s worst fears have come true. Not only has her son, Joe, become a policeman, but an act of heroism has given him the chance to pick where he wants to serve. Young Joe has decided to serve in the dangerous Firearms Division, which investigates illegal weapons and illegal arms sales.

The mother asks Commissioner Regan to transfer her son to a less dangerous position, but that would be against the Commissioner’s principles. Not only does he believe that parents can’t micromanage their adult children’s lives, but he also believes that a police officer risks his or her life every day when they’re working out on the street. An officer can never truly know what each day will bring, whether he or she works in a dangerous area or a low crime area that appears safe.

“Family Secrets” is one of the most well-written and well-acted episodes of BLUE BLOODS. Because this is an ensemble series, most if not all BLUE BLOODS episodes feature multiple storylines. The multiple stories in “Family Secrets” are particularly well written because they’re written so concisely while at the same time they’re written to maximize the theme that’s depicted in the title, Family Secrets. In the end, the ultimate family secret to the love found in the Regan household is their faith in God through Jesus Christ.

Thus, “Family Secrets” ends with one of the dinner table Christian prayers that occur in some episodes of BLUE BLOODS. The grandson, Sean, leads the family prayer in this episode. He says the prayer in the Name of the Holy Trinity and refers to Jesus Christ as “our Lord.” Also, the scene where the murderous gangster gets his just desserts occurs in the courtroom with Erin, Danny and Anthony. The scene opens on the motto above the judge’s bench, “In God We Trust,” the first part of the “American Trinity” that includes Liberty and E Pluribus Unum. The camera then pans down from there to show Erin Regan requesting, and the judge agreeing, to have the police, led by Anthony and Danny, arrest the gangster for ordering Geo’s murder.

The “Family Secrets” episode of BLUE BLOODS is great TV full of strong faith and values, but there’s some foul language and two intense scenes of violence. So, MOVIEGUIDE® advises caution for older children, including younger teenagers.