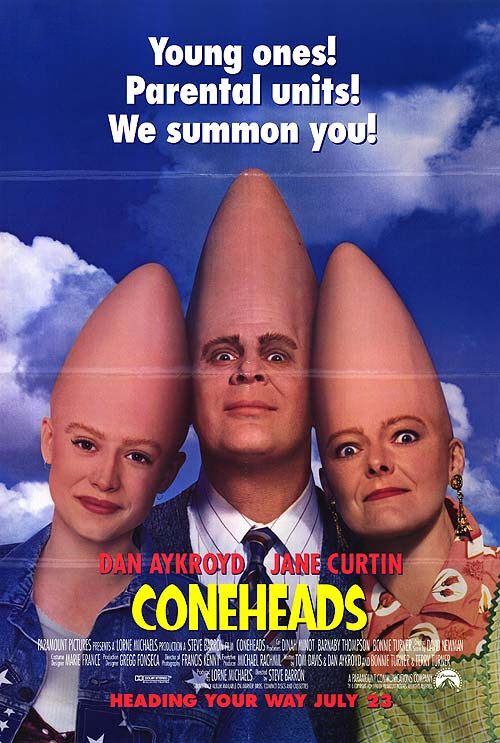 In CONEHEADS, Beldar (Dan Ackroyd) and Prymatt (Jane Curtin), find themselves living in suburbia and avoiding American immigration officials after their spaceship is shot down by a U.S. fighter plane in the 1960's. While much of this film is funny and silly, its failing is the contrived plot which strains from the burden of extending a five-minute SATURDAY NIGHT LIVE skit into a 90-minute feature, as well as several objectionable scenes.

What started as a comedy skit about aliens living in suburbia on SATURDAY NIGHT LIVE over 15 years ago has come of age with this special effects extravaganza. The story starts in the 1960’s when the Coneheads, Beldar (Dan Ackroyd) and Prymatt (Jane Curtin), find themselves floating in New York harbor after their spaceship has been shot down by a U.S. fighter plane. The Coneheads adapt remarkably well to life in the U.S.A. Beldar becomes a hard-working immigrant, while Prymatt tends to their domestic needs. Their trouble starts when an arrogant Federal immigration official picks up their trail. Beldar and Prymatt spend the rest of the film avoiding deportation by the INS authorities while raising their daughter in suburbia.

While much of this film is funny and silly, its failing is the contrived plot which strains from the burden of extending a five-minute skit into a 90-minute feature. The funniest gags derive from the differences between the Coneheads and the Americans. Other elements do not work as well. A lengthy sequence is devoted to the Coneheads returning to their home planet, but the writers leave their jokes behind on earth. CONEHEADS also contains several objectionable scenes. CONEHEADS is a light summer movie that offers a few funny jokes without much story.