"Who Took Jesus Out of Christmas?" 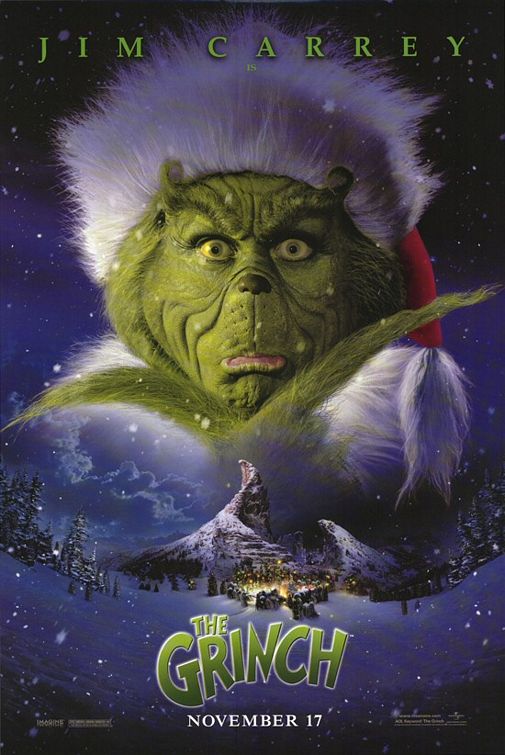 Funnyman Jim Carrey plays the title role in DR. SEUSS’ HOW THE GRINCH STOLE CHRISTMAS. The outline of the movie follows the story from the classic children’s book and TV cartoon. Adding to the fun in this version, however, is Cindy Lou Who, who finds out that the Grinch had a tough childhood, so she gets the other Whos to invite the Grinch to their Christmas celebration. Things go wrong, however, and the Grinch feels rejected and plots to steal all the Christmas presents in Whoville.

HOW THE GRINCH STOLE CHRISTMAS is an entertaining family fantasy. This movie retains the central message that there’s more to Christmas than presents and augments it with tremendous visual and special effects. Although the story includes some romantic worldview elements, it is clear that there is sin in Whoville and that people need repentance and forgiveness. The production values here are a wonderful treat, but many people may be disappointed about the lack of specific references to Jesus Christ in this Christmas offering. The movie also includes some infrequent scatological humor and some slapstick violence that parents should warn their children not to imitate

(BB, Ro, V, A, M) Moral worldview marred by some romantic worldview notions & very lightweight & very infrequent scatalogical humor; no foul language but some scatalogical humor including Grinch places mistletoe near his rear-end, Grinch gives sleeping man having a romantic dream the rear of a dog to kiss & Grinch falls on top of woman with low cut dress; slapstick violence including monster pops out of Grinch cave which turns out to be a carnival-like dummy with a dog barking into a megaphone, Grinch eats glass, Grinch hits himself with mallet as a sedative, Grinch places his head between monkey banging cymbals to avoid the sounds of Christmas, & Grinch has termites in his teeth; no sexual activity, however some references including Christmas party where keys are being exchanged, Martha May Whovier makes sexual references & Grinch falls on top of her with his head on her chest; no nudity but Martha May wears suggestive outfits; Grinch eats wine bottle but does not drink alcohol and later then takes a swig from a bottle labeled “XXX”; and, Grinch overcomes self-pity, anger, meanness, & vengefulness.

DR. SEUSS’ HOW THE GRINCH STOLE CHRISTMAS is one of the most entertaining family fantasies to come along in quite a while. Based on the very popular Dr. Suess book and the equally popular television cartoon special, this movie retains the central message of the story that there is more to Christmas than presents and gifts and then wraps that wonderful message in visual and special effects treats. The production values here are excellent, but some people may wonder after seeing it where Jesus Christ is in this Christmas offering.

The story of how the Grinch stole Christmas should be familiar to almost everyone. Narrated by Anthony Hopkins, the movie tells us how the Grinch lives high above Whoville. The Whos are preparing for Christmas, their favorite holiday, and the Grinch, played superbly by Jim Carrey, hates Christmas. All the Whos are rushing around buying and purchasing presents. The Grinch sneaks into town and goes to the post office where he mis-sorts the mail and throws in some bills and jury duty notices to add to the confusion.

Cindy Lou Who, played with sheer brilliance by little Taylor Momsen, is wondering whether Christmas is just about things. Isn’t there more to Christmas? Her father is the local postman, and she surprises the Grinch as he’s mis-sorting the mail. She falls into the sorter and discovers that the Grinch has a heart after all when he rescues her. He denies, of course, that he has a heart, and Cindy Lou starts to ask the other Whos about the history of the Grinch. She finds out that he had a tough childhood and the other Whos made fun of him. However, this romantic setup does not fully explain his mean-spirited nature, and the movie makes clear that he was mean from the beginning, and that the other Whos are also flawed, especially the mayor. Thus, at a deeper level, there is sin in Whoville, though it is never named.

While the Grinch is feeling sorry for himself on the top of Mt. Crumpet, Cindy comes up to invite him to be the honorary chairman of the Whobilation. The mayor objected to choosing the Grinch, but Cindy quotes the BOOK OF WHO, which says we need to care for the needy and love the outcast. The mayor misquotes the BOOK OF WHO, and Cindy stands up for a literal, accurate, inerrant reading of the BOOK OF WHO, which causes all the Whos to vote for the Grinch. The Grinch comes down to participate in Whobilation, but then feels rejected. So he goes up to Mt. Crumpet to plan his revenge. His revenge is to steal all the Christmas presents.

When the townspeople awake with no presents, the start to complain, but Cindy Lou tells them that Christmas is more than gifts and her father stands up for her. Eventually, Cindy Lou goes up Mt. Crumpet to find the Grinch.

It should be noted that there are many romantic elements to this story, but they are not the controlling worldview. Underneath, it is clear that there is sin in Whoville, although it is never called by the name sin. It is also clear that there needs to be repentance and forgiveness and a renunciation of sin. What is lacking, however, is a clear statement of what this “more” in Christmas is. Cindy’s father says it’s his family, but clearly it is more than that, and it’s more than love. Therefore, this movie points to something beyond, but it does so in a very subtle fashion. This is too bad. Friends who work for Ron Howard say that he claims to be a Christian. It’s unfortunate that his faith did not find more expression in this movie.

Aside from that, this is a very entertaining feature film. The fantasy, the pacing and the music all work together to bring you right into the heart of the story. Regrettably, there are a few instances of scatological humor: the Grinch places mistletoe over his derriere; when the mayor is dreaming of his true love, the Grinch lets the mayor kiss the backside of the Grinch’s dog, Max; the Grinch falls on top of Martha May Whovier, with his head between her ample endowment; and, there is a Christmas party where keys are being placed in a fishbowl. These are just about the only instances of scatological humor, but they’re regrettable in a movie that is so good-hearted.

Also, it must be pointed out that the Grinch is frightening in the beginning, and he uses cartoon slapstick violence upon himself. He hits himself with a big wood mallet as a sedative, he eats glass, and he puts his head between banging cymbals. There is even a crash test where he pretends to be the dummy, testing his new sleigh. He also talks about his self-pity. These scenes are extremely funny, but discernment for younger children is required. Children need to be told not to copy these slapstick acts.

In terms of big budget Hollywood offerings, THE GRINCH is a treat. Beyond its sweetness, action, adventure, and fantasy, it makes some wonderful moral points and has a delightful ending. If only it had brought Jesus into the picture instead of just vaguely pointing to Something more, it would have been a true Christmas classic.

Rent or Buy DR. SEUSS' HOW THE GRINCH STOLE CHRISTMAS: