"Get Your Tissues Ready" 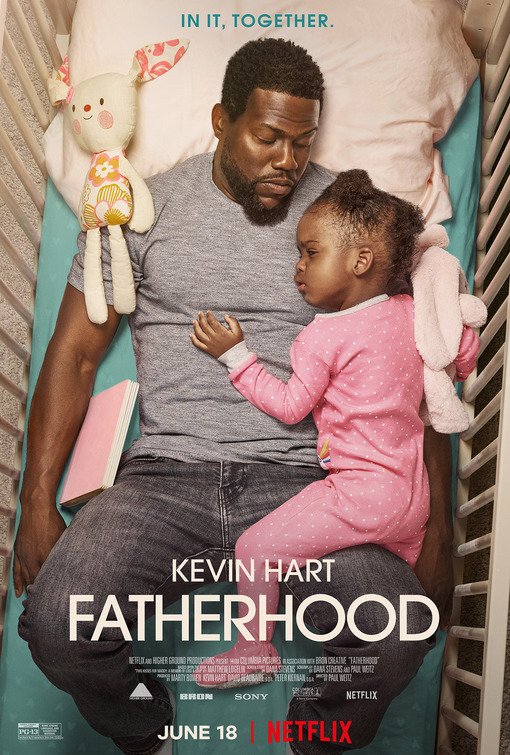 FATHERHOOD is a comedy drama on Netflix. Matt must raise his new baby daughter, Maddy, on his own when her mother unexpectedly dies. Matt’s mother and mother-in law help get Matt on his feet as a parent. So do his friends. Eventually, however, Matt asserts he can parent Maddy without help. Five years later, Matt and Maddy are doing well, but the dynamic of being without a wife and mother still impacts them. Can they get through their lives together alone?

FATHERHOOD is equal parts funny, compelling and heartfelt, with good performances, especially by Kevin Hart and Alfre Woodward as the father and the mother-in-law. The movie has a strong moral worldview Christian elements. It stresses the power of family commitment, perseverance and overcoming hardships to provide for one’s family. There’s also a church scene and a mention of God’s plan. However, FATHERHOOD is marred by many obscenities, about 30, some sexual immorality and politically correct elements when the daughter’s Catholic schoolteachers are portrayed as the villains for forcing her to wear a skirt instead of pants. So, MOVIEGUIDE® advises extreme caution.

(BB, C, PC, Ab, LLL, V, SS, N, A, M):
Dominant Worldview and Other Worldview Content/Elements:
Strong moral worldview highlights the power of family commitment, staying the course when times get tough and providing for one’s children, despite hardships, plus there’s a scene in a church and a few “Thank Gods” and a mention of God’s plan,” some politically correct liberal elements come into play when a young girl wants to wear pants at a Catholic school and the schoolteachers are portrayed as the villains for wanting her to do so
Foul Language:
About 30 obscenities, one JC profanity, one swear to God profanity, and conversations about diapers and such things
Violence:
Implied C-section (not depicted though), man hits a clown in the face out of fear, and young girl falls on the jungle gym and cuts her head, blood depicted
Sex:
Implied fornication between a dating couple, implied fornication in a cartoon and some sexual innuendo
Nudity:
Upper male nudity in one scene
Alcohol Use:
Social drinking and a scene in a bar
Smoking and/or Drug Use and Abuse:
No smoking or drugs; and,
Miscellaneous Immorality:
Comedic lying, name calling, some bullying, and mention of playing poker.

FATHERHOOD is a comedy drama on Netflix about a man who must raise his new baby daughter, Maddy, on his own when her mother unexpectedly dies just after childbirth. FATHERHOOD is equal parts funny, compelling and heartfelt, with good performances and a strong moral worldview with Christian references, but it also has too many obscenities, about 30, and some sexual references and innuendo.

The movie begins with Matt, who’s at the pulpit at a church at funeral. Cut to a few days earlier. Matt and his wife Liz are with a doctor. Liz is nearing the time to give birth. The doctor says they need to induce labor and have a C-section that night! Matt and Liz handle the procedure like pros and named their daughter Maddy.

The next day, though, when Liz prepares to be wheeled out of the hospital, she struggles to breath and soon after, dies of a pulmonary embolism. Back at the funeral, Matt, his mother-in law and mother discuss the hardships of parenting and if he’s up to the task. They try to convince Matt to move closer to family, but Matt wants to stay planted where his life with Liz was and raise Maddy himself.

Of course, Matt must adjust to daily feedings, naptimes and a new work/life balance. Thankfully, he has some friends who share some of the load, and, for the most part, an understanding supervisor at his job. Positively too, Matt reaches out for help at a local parenting support group. It seems he’s well on his way to becoming a super-dad.

Cut to about five years later, Maddy is going to school, and Matt’s friends try to set him up with a woman at a social event. Oddly, she’s named Liz, which sends chills down Matt’s spine. However, she seems nice, and Matt begins to date her, with the approval of Maddy, who calls the woman “Swan.”

Maddy, however, is somewhat of a tomboy and a spitfire, which gets her into trouble at her Catholic school, where she must wear a skirt and behave. When some boys tease Maddy for wearing boy’s underwear on the jungle gym, Maddy tries to get physical in defense but winds up hurting her head and going to the hospital. Matt rushes to be by her side. However, being in the same building where his late wife died, brings up insecurities about his ability to provide for his daughter.

With so much to consider, family, dating and everything in between, will Matt make choices that honor Maddy and his commitment to fatherhood?

FATHERHOOD’s casting is very good. Kevin Hart as Matt and Alfre Woodard as Matt’s mother-in-law, Marian, showcase great dramatic tension on screen and humanize the reality that many families face when loss comes into play. Channing Tatum (STEP UP, DEAR JOHN) joins Kevin Hart as producer on the movie, as both men also have daughters of their own, which adds some sweetness to the feel of the movie. FATHERHOOD is equal parts funny and compelling, with emotional, heartfelt moments.

FATHERHOOD has a strong moral worldview with some Christian and politically correct elements. The movie highlights the power of family commitment, staying the course when times get tough, and providing for family, despite hardships. Positively, there’s also a scene in a church, a few Thank Gods and a mention of God’s plan. Politically correct elements come into play when the protagonist’s daughter wants to wear pants at her Catholic school, and the movie portrays the schoolteachers as the villains for trying to stop her. FATHERHOOD is also marred by lots of foul language and some sexual immorality. So, MOVIEGUIDE® advises extreme caution.