"Return of the Gozerian" 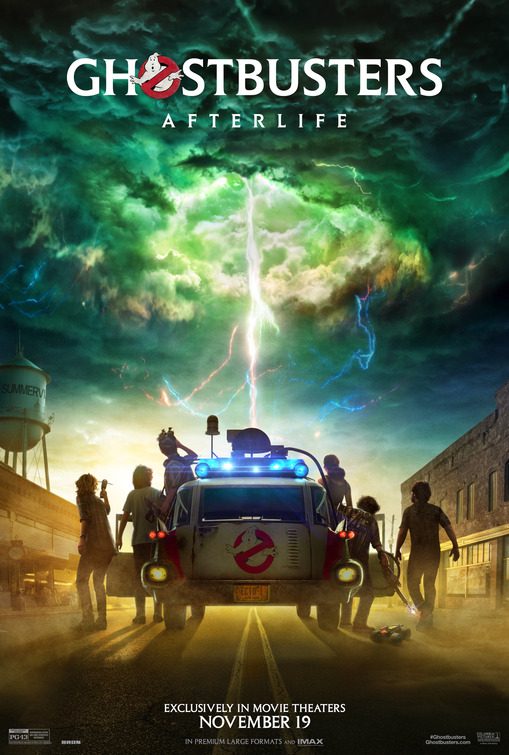 GHOSTBUSTERS: AFTERLIFE reboots the popular franchise with a story about the ghost of one of the four original ghostbusters contacting his 12-year-old granddaughter, Phoebe. After getting evicted, Phoebe’s mother has moved the family, including Phoebe’s teenage brother, Trevor, to the estranged grandfather’s old, decrepit farmhouse in a small rural town. The grandfather’s ghost directs Phoebe to get out some of his old ghostbusting equipment hidden in the farmhouse. However, she and her science teacher unleash a supernatural wolf creature the grandfather had trapped just before he died. The demon wolf creature’s release triggers a chain of events leading to a new showdown with a demonic Sumerian “god.”

GHOSTBUSTERS: AFTERLIFE breathes some new life into the franchise. The new characters are fun, and the action set pieces are exciting and funny. However, the movie’s pro-family content and the heroes’ battle to defeat demonic forces are marred by a strong occult worldview. For example, Phoebe’s dead grandfather communicates with her by moving objects. GHOSTBUSTERS: AFTERLIFE also has some crude language, including more than several obscenities, some light profanities and about two lewd comments.

(OOO, FR, BB, C, Cap, LL, VV, S, A, M):
Dominant Worldview and Other Worldview Content/Elements:
Very strong occult worldview where two demonic dog creatures possess a man and a woman, and where a ghost helps the heroic main characters use science to defeat an ancient, false demonic goddess similar to Satan or the Greek god Hades and reconnect with his, the ghost’s, estranged family, some pro-family elements, references to the Apocalypse and Revelation 6:12, and a comment is made about economic success in the 1980s
Foul Language:
12 obscenities, seven light profanities
Violence:
Strong, sometimes scary violence includes demonic wolf creature appears within a fog two or three times and changes into a red blur that flies away at a high speed, scary looking dog creatures menace and chase people, colorful light beam shoots out from special gun and effaces some buildings while children in a station wagon chase ghost creature, creature eats metal, people use colorful light beams to stop demonic god and trap supernatural creatures, supernatural character splits a man in half with her hands, little marshmallow creatures bite and destroy things, explosions
Sex:
One or two lewd comments include a boy says it looks like a man wants to “bone” someone’s mother, and romance blossoms between them and between two teenagers
Nudity:
No nudity
Alcohol Use:
Alcohol use in background in one restaurant scene
Smoking and/or Drug Use and Abuse:
No smoking or drugs; and,
Miscellaneous Immorality:
Some childhood rebellion and discussion about a man abandoning his daughter, wife and friends, but he has a good reason, to protect their future.

GHOSTBUSTERS: AFTERLIFE reboots the franchise with a story about the ghost of one of the four original ghostbusters helping his estranged daughter and her two children fight a new manifestation of a demonic Sumerian “god” in a small American town built by an evil occult architect who worships the god. GHOSTBUSTERS: AFTERLIFE breathes some life into the franchise, but the movie’s positive pro-family elements, fight against demonic forces and references to Revelation 6:12 are marred by the movie’s occult worldview and some crude language.

The movie opens with Dr. Egon Spengler, one of the four original ghostbusters, fighting off a demonic creature in an old, rundown farmhouse, then dying of a heart attack.

Cut to Spengler’s estranged daughter, Callie, and her two children, Trevor and Phoebe, getting evicted from their house. Callie takes her children to live on her father’s farmhouse, which is located in a small, former mining town called Summerville. The rusty gate to the farmhouse is peppered with signs about the Apocalypse and a reference to Revelation 6:12, which talks about a great earthquake, the sun being darkened and the moon turning blood red.

Inside the house, Phoebe finds the ghost detector which her grandfather was using when he died. The detector begins detecting the invisible presence of her grandfather’s ghost. He starts playing chess with her and leads her to the black and yellow ghostbuster trap he used to trap the demon. He also leads her to one of the ghostbuster guns which he and his friends used to wrangle ghosts and demons and defeat the demonic Sumerian god Gozer in New York City in the 1980s. Meanwhile, Phoebe’s brother, Trevor, finds the ghostbusters vehicle and decides to fix it. He gets it running and takes it for a spin.

Phoebe and her new friend, Podcast, take the ghostbuster detector and trap to their science teacher, Gary, who’s a big fan of the ghostbusters. He thinks the ghost trap is just a replica at first, but Phoebe convinces him it’s real. They decide to open the trap. Bad decision. Because, when they open the trap, it releases the demonic creature trapped by Phoebe’s grandfather before he died. The creature flies back to the mine on the outskirts of town from which it escaped.

The release of the creature triggers a chain of events leading to a new apocalyptic showdown with Gozer the Destroyer.

GHOSTBUSTERS: AFTERLIFE breathes some life into the franchise. The new characters are fun, and the action set pieces are exciting and funny. Mckenna Grace stands out as Phoebe. Logan Kim is funny as Phoebe’s friend, Podcast, who hosts his own podcast about paranormal activities and conspiracy theories, sort of like a pint-sized Art Bell, the late paranormal radio host. Paul Rudd, Marvel’s Ant-Man, is also funny as Phoebe’s science teacher. Carrie Coon delivers a heartfelt performance as Phoebe and Trevor’s mother, who’s upset because her father, Phoebe’s grandfather, abandoned the family years ago to stop any new manifestation of Gozer.

That said, the movie’s pro-family content and battle to defeat demonic forces are marred by the movie’s strong occult worldview. For example, Phoebe’s dead grandfather communicates with her by moving objects. This occult situation instigates the battle between the heroes and the demonic forces. By the way, except for the grandfather, none of the creatures and supernatural characters in GHOSTBUSTERS: AFTERLIFE are really ghosts. They’re more like demons. Also, Gozer is a fake shapeshifting god who’s more akin to Satan or one of Satan’s high-level demons. He appears as a female but speaks with a masculine voice. GHOSTBUSTERS: AFTERLIFE also has some crude language, including more than several obscenities, some light profanities and abut two lewd comments.