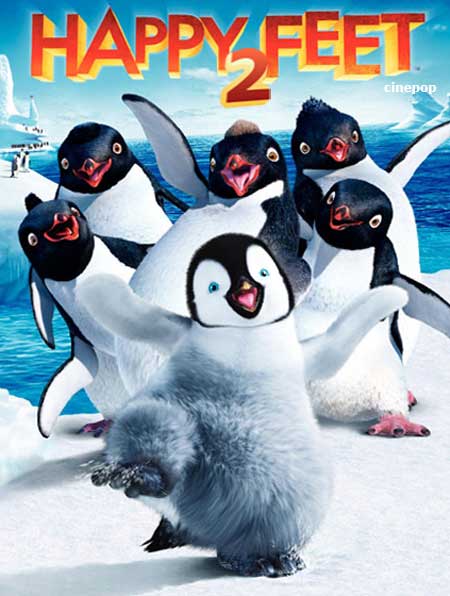 HAPPY FEET TWO brings back the characters from the first HAPPY FEET movie, but this time with even more blatant politically correct messages. Erik the penguin rebels against his father, Mumble, and runs away. Erik finds a totally different group of penguins in Adelie Land. He also meets Mighty Sven, a flying penguin who’s “evolved.” Mighty Sven tells Erik to embrace his differences, telling Erik, “If you will it, it will be yours.” Erik reluctantly returns to the Penguin Empire with his father, but global warming has endangered their food supply. Erik and Mumble have to find a solution. Meanwhile, two shrimp-like male crustaceans debate the merits of a homosexual same-sex partnership.

HAPPY FEET TWO is a big budget animated movie with beautiful 3D. However, it has a blatant politically correct, environmentalist message. It also promotes homosexual same-sex partnerships and homosexual adoption, a lynchpin in today’s liberal identity politics. Finally, it also preaches magical or wishful thinking where people can change the future with their minds and a liberal, humanist view of evolutionary change. Media-wise parents will want to protect their children from the politically correct propaganda of HAPPY FEET TWO.

(PaPaPa, PCPCPC, HoHo, EEE, FRFR, HH, EvEv, B, V, MM) Very strong mixed pagan, politically correct worldview promoting homosexual same-sex partnerships and homosexual adoption and promoting radical environmentalism and global warming hysteria throughout, including eating meat is seen as bad as are all humans, combined with false theological elements of magical thinking and willing things to be so, mixed with strong left-wing humanist values that include support for evolutionary change, with some moral elements of saving lives and working together; no foul language but crude language including “sucks” and a scene of a young penguin urinating in front of a crowd after being embarrassed; violence includes sea elephant gets pushed and almost dies, sea elephants fight each other; no sexual content but speaking of “making eggs with other penguins”; no nudity; no alcohol; no smoking or drug use; and, children deliberately disobey father, children are rebellious, and comments on existentialism fitting in with humanist elements noted above.

HAPPY FEET TWO once again brings back the characters from the first HAPPY FEET movie, but this time with an even more blatant environmentalist message. In this case, the beautiful 3D animation doesn’t negate the movie’s extreme environmentalist and politically correct messages.

Mumble is known as the tap master, creating a beat that all the penguins from the Empire love to tap along. However, his son, Erik, is nervous about dancing and feels out of place. Completely embarrassing himself, Erik runs away with two of his friends, Atticus and Nestor, admittedly “rebelling.”

Finding a totally different group of penguins in Adelie Land, Erik meets The Mighty Sven, a flying penguin. Seemingly an “evolved penguin,” Mighty Sven amazes the Adelie Land penguins and Erik himself, telling Erik that differences between penguins should be embraced and he should never feel out of place. Mighty Sven is a big fan of the politically correct and furthers it by telling the formidable Erik that “if you will it, it will be yours” because you have to want it to will it, and then it will be.

Searching for Erik, Mumble finally finds his son. Erik reluctantly returns with Mumble to the Empire Land. Due to alleged “Global Warming,” the earth has shifted the landscape and the Empire Penguins have been trapped and can’t get food. Mumble, Erik, and his friends are the only Penguins left to help their whole colony of Penguins get food. After some time of bickering between father and son, they decide to ask the Adelie colony to help them.

At the same time as this plot line, a subplot is stirring with the Krill named Will and Bill. Will is very interested in finding out the meaning of life beyond the krill colony, so he pulls away and Bill follows him. At one point Bill feels like Will doesn’t appreciate him after telling Will that they can have children together by adopting, and Will rejects this line of thought, pointing out that they aren’t the same sex. Bill continues to tell Will they are partners and life works better together, but they split, leaving Bill lonely. Following this is statements about being different should be accepted. Once the two meet again, Will continues to tell Bill of the “existential terrors of existence,” and Bill encourages Will by telling him he was changing the world with his progressive thoughts on evolving and adapting.

HAPPY FEET TWO overall is clearly produced with a high budget, so the animation being incredible. Though this is the case, the movie is clearly a message movie and the message is that humans are bad and environmentalism is the key. The humans end up leaving the Penguins entrapped and without food. This leads the audience to think all the humans are bad. Also, humans rescue two characters trapped in some tar, but when the penguins see that the humans are eating meat, they run for their lives.

All in all, HAPPY FEET TWO is an extremely blatant, abhorrent example of political correctness and environmentalist hysteria run amok. The movie promotes global warming hysteria. It also promotes homosexual same-sex partnerships and homosexual adoption. Finally, it promotes a leftist, humanist view of evolutionary change as well as magical or wishful thinking.

Media-wise parents will want to keep their vulnerable children from seeing the politically correct propaganda of HAPPY FEET TWO. This movie clearly has a radical agenda aimed at indoctrinating the world’s children with far left political ideology. There are much better family movies out there for your family than HAPPY FEET TWO.