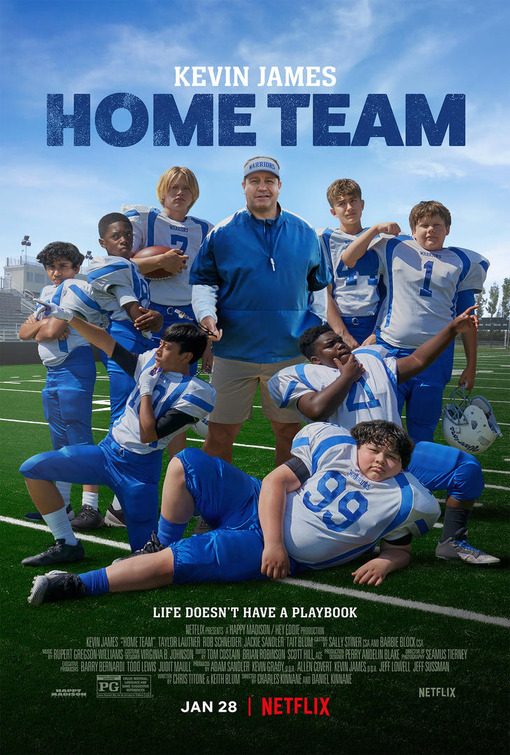 HOME TEAM is a delightful family comedy on Netflix. Sean Payton, the coach of the New Orleans Saints, is at the top of his game. His team just won the Super Bowl. However, he’s suspended in 2012 when he’s accused of paying his players to injure players on other teams. Sean decides to spend time with his son, Connor and sees that Connor’s football team needs lots of help. However, Connor isn’t pleased to see his dad, because Sean hasn’t spent much time with Connor since Sean’s divorce. Will Sean be able to coach Connor’s ragtag group of middle schoolers to become a winning team? Will Connor forgive his father?

Based on a true story, HOME TEAM is funny, enjoyable and inspiring. It has a strong moral worldview of reconnecting with your family. The main character learns he must be present in his child’s life and that will be the biggest blessing in his own life. The movie shows the son’s stepfather is a New Age hippie, but his goofy beliefs are used for comic relief. Also, there’s some light cursing in HOME TEAM.

(BB, CC, FR, LL, V, N, A):
Dominant Worldview and Other Worldview Content/Elements:
Strong moral, redemptive worldview about forgiveness, the importance of family, coming together and loving each other, plus one character is a New Age holistic hippie who’s seen doing meditation and who mentions what meditation is, but this is seen in a comical way, as comic relief
Foul Language:
11 light obscenities, one light profanity, and a mention of butthole
Violence:
A car is accidently set on fire and light football conflict
Sex:
No sexual content
Nudity:
Upper male nudity when children are swimming in the pool
Alcohol Use:
Light drinking
Smoking and/or Drug Use and Abuse:
No smoking or drugs; and,
Miscellaneous Immorality:
Nothing else objectionable.

HOME TEAM is a delightful comedy on Netflix where the coach of the New Orleans Saints, Sean Payton, gets suspended and goes home to coach his son’s middle school football team. Based on a true story, HOME TEAM is a funny, inspiring, enjoyable family movie that shows family relationships being restored, but it does have some light foul language.

Sean Payton has coached the New Orleans Saints during their win at the Super Bowl. He’s at the top of his game and doing extremely well, until one day he’s accused of having his players injure players on other teams. Sean decides to go back to his home and see his middle school son, Connor, playing on the football field. Connor isn’t exactly pleased to see his dad, because his dad has not spent much time with him after the divorce.

Deciding this is the best time to reconnect with his son, Sean decides to coach Connor’s football team. The team itself has some potential, but they’ve never won a game and, in fact, lose by huge numbers. Sean sees Connor’s stepfather trying to connect with Connor, and he feels like he has done his son a disservice by not being present enough in his life.

Will Sean be able to help this failing football team? Will Connor be able to forgive his father and build a relationship?

HOME TEAM is a funny, enjoyable movie that’s entertaining throughout. This movie is proof that, even if you don’t have a big budget, you can make a movie that’s really entertaining if you have a good storyline.

HOME TEAM has a strong moral worldview of reconnecting with your family. The main character learns he must be present in his child’s life and that will be the biggest blessing in his own life. The movie shows the stepfather as a New Ager, holistic hippie, but it’s played more for laughs then to promote that lifestyle. Also, there’s some light cursing in the movie.