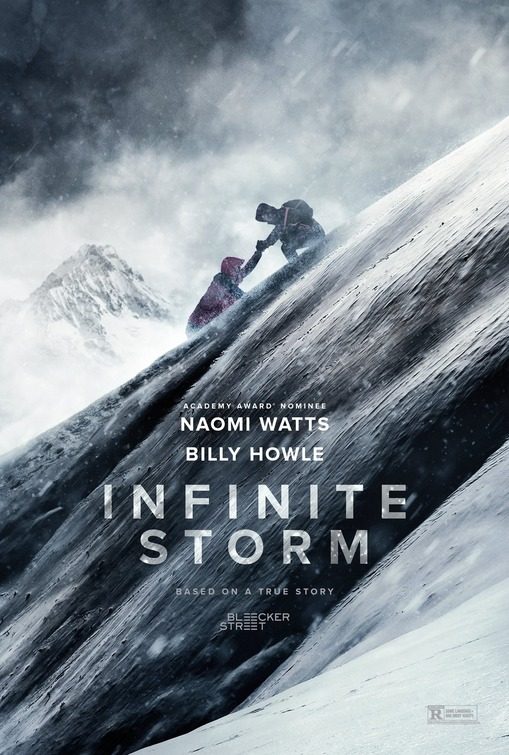 INFINITE STORM is a true story about a woman who rescues a despondent man stranded in a blizzard. Pam Bales is an experienced climber and search and rescue volunteer in New Hampshire. Pam sets out for a morning hike on Mount Washington, despite a forecast predicting a massive snowstorm. Pam tries to get down the mountain before night falls, but she comes across an incoherent man sitting in the snow. He is barely alive. Pam tries to help the man down the mountain, but he fights her constantly.

INFINITE STORM is based on a marvelous story, but it fails to have the impact it could. Most of the movie is just long takes of the two characters struggling to get down the storm-covered mountain. After a while, this becomes tedious. Also, the movie reveals little about the two characters until the final 15 minutes. INFINITE STORM has a strong moral worldview. It implies every life is valuable and has thoughtful things to say about grief. However, INFINITE STORM is marred by some Romantic content, strong foul language, bloody images, and brief nudity.

(BB, RoRo, LLL, V, NN, M):
Dominant Worldview and Other Worldview Content/Elements:
Strong moral worldview shows woman who’s loyal, determined, and committed to save the life of another person, even though she doesn’t know him, plus movie implies every life is valuable, mitigated by strong Romantic elements suggesting people are essentially good, but that society has corrupted them, and a despondent man stranded on a mountain is controlled by his emotions, not his logic or reason, and he forgets that his actions also impact an experienced female climber’s life who’s trying to rescue him and he tries to commit suicide a handful of times
Foul Language:
About 18 obscenities (including several “f” words), four GD profanities and six light profanities, including woman curses frequently at a storm and how challenging a man she’s trying to rescue can be
Violence:
Some action violence includes an experienced female climber tries to rescue a despondent man during a blizzard on a mountain, woman shakes him a few times for him to get it together and cooperate with her as she tries to save his life, plus there some images of man’s wounded ankle, which is bloody and infected, and a flashback to two accidental deaths that haunt the lead female character
Sex:
No sex
Nudity:
Partially obscured female nudity from the side as woman takes off all her clothes to take a bubble bath, plus woman appears in a sports bra and woman takes off man’s wet clothes, except for his underwear, to wrap his body and warm him up
Alcohol Use:
No alcohol use
Smoking and/or Drug Use and Abuse:
No smoking or drugs; and, Miscellaneous Immortality: egotism, rebellion.

INFINITE STORM is a true story about an experienced climber who rescues a despondent man stranded in the middle of a deadly blizzard on top of Mt. Washington. Despite some top-notch acting and beautiful cinematography, INFINITE STORM suffers from tedious action, poor character development, some silly plot points, strong foul language, and brief nudity.

Pam Bales is an experienced climber and search and rescue volunteer living in New Hampshire. The movie opens with a glimpse into her daily life. She lives alone in a cabin in the woods and spends a great deal of time preparing for epic, long hikes. She gathers her things and heads out to hike Mt. Washington. A friend warns her a big storm is coming, but she ignores these warnings and decides to hike the mountain anyway. She drives to the parking lot where she’ll begin her hike. Once there, she notices another car in the lot. Some hikers passing by tell Pam they didn’t see anybody up on the mountain, but Pam knows there must be someone if this car is still here.

Pam starts hiking, but the fierce winter storm wipes her out on numerous occasions. She falls into a snowy hole. She can barely hang on to her backpack. She finally reaches the summit, realizing she must turn back immediately before dark, because the storm is becoming too much.

Before she starts down the mountain, she notices a man in the distance. She approaches him, but he’s too cold to speak. In fact, he’s almost frozen to death, sitting on top of the summit in a pair of sneakers and shorts. She decides to call the man “John.” She puts warm clothes, fresh socks, and new shoes on him, to help get his body temperature up. She helps “John” up as they prepare to go down the mountain.

However, rescuing John proves to be a huge challenge. While Pam risks her life to save John, on the flip side, he is constantly trying to take his own life. John runs away from Pam, after she has covered him in her back up clothes and jumps off a rock, to take his own life. He lives, but he breaks his ankle in the process.

Now Pam’s job becomes even harder as she must support John’s body weight since he now only has one good foot to walk. John is constantly crying and begging Pam to let him die, but she refuses. John’s foot becomes infected due to this wound from his broken ankle, and he develops frostbite. John can’t handle this pain and ends up in a freezing pool of water, which appears to be another suicide attempt. Pam rescues him again, but at this point, it’s hard to believe this John guy would still be alive with all these suicide attempts in this grueling winter storm.

Will Pam get John safely down the mountain? Or, will his attempts to commit suicide be successful?

INFINITE STORM has some major flaws in character development. Also, while the movie can drag at times, the epic, stunning shots of the mountains are quite beautiful. Viewers who like watching nature visuals will enjoy the long takes of the snowy peaks that fill the screen for most of the movie. With a minor romantic worldview, along with language and nudity, caution is advised for children and teenagers.

INFINITE STORM is based on a marvelous true story, but it fails to have the impact it could. Most of the movie is just long takes of the two characters struggling to get down the mountain during the storm. After a while, this becomes tedious to watch. Also, the movie reveals little about the two characters until the final 15 minutes. Also, some of the plot points don’t make sense. For example, the man has trouble walking but, at the end, he suddenly can run to his car. INFINITE STORM has a strong moral worldview implying that every life is valuable. It also has some thoughtful things to say about dealing with personal grief. However, INFINITE STORM is marred by some Romantic content, strong foul language, bloody images, and brief nudity requiring extreme caution.

INFINITE STORM is based on a marvelous true story, but it fails to have the impact it could. The acting is top notch, but most of the movie is just long takes of the two characters struggling to get down the mountain during a dangerous storm. This becomes very tedious to watch after a while. Also, the movie reveals little about the two characters until the final 15 minutes. Finally, some of the plot points don’t make sense. For example, the man can hardly walk due to a broken ankle, but suddenly he can run to his car. That said, the cinematography of the snow and the mountain is magnificent.

INFINITE STORM has a strong moral worldview implying that every life is valuable. It also has some thoughtful things to say about dealing with personal grief. However, it’s marred by some Romantic content, strong foul language and brief nudity requiring extreme caution.