JUMANJI: THE NEXT LEVEL

"Friends Should Not Hold Grudges" 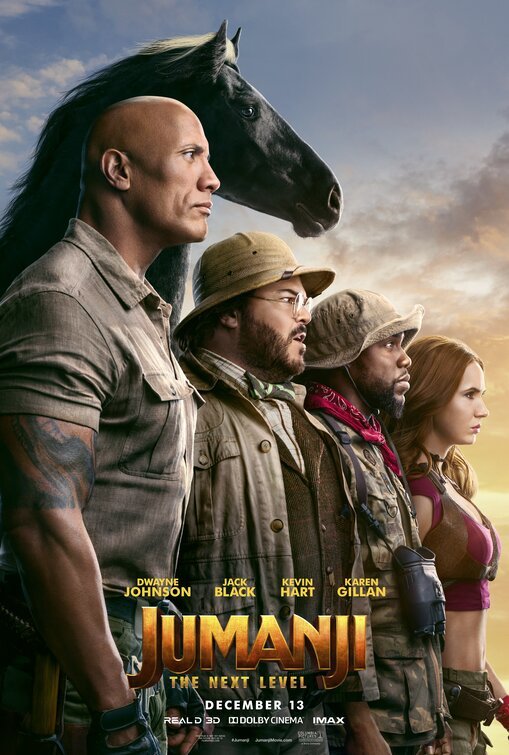 JUMANJI:  THE NEXT LEVEL is a continuation of the JUMANJI reboot series of comedy adventures. Martha, Fridge and Bethany return to the video game world of Jumanji to rescue their friend, Spencer. However, instead of taking Bethany, the game takes Spencer’s grandfather, Eddie, and Eddie’s estranged friend, Milo, who’ve come to visit them. Not only must Martha, Fridge, Eddie, and Milo rescue Spencer; they also must save Jumanji from a mean and powerful warlord, who’s stolen a magical jewel that protects Jumanji from drought and desolation. To reach the warlord, the team encounters rampaging ostriches, vicious baboons and a maze of wooden bridges high above a deadly chasm.

JUMANJI:  THE NEXT LEVEL is an entertaining, funny, exciting comical adventure. The movie is about loving your friends and family. Happily, THE NEXT LEVEL has no gender-bending, sexual jokes, unlike the first JUMANJI reboot, which was subtitled WELCOME TO THE JUNGLE. However, like too many PG-13 blockbuster movies recently, it still has lots of foul language, including more than several strong profanities. Because of this, MOVIEGUIDE® still advises extreme caution for JUMANJI:  THE NEXT LEVEL.

(B, C, LLL, VV, M):
Dominant Worldview and Other Worldview Content/Elements:
Light moral worldview with some redemptive content about loving your friends and family, overcoming cruel villainy, not holding grudges, and forgiveness
Foul Language:
32 obscenities (mostly “h” or “d” words, but several “s” and a** words and an SOB), seven strong profanities (including one or two Jesus profanities), and 16 light profanities
Violence:
Lots of rousing and sometimes scary action violence such as people face a rampaging herd of giant ostriches, a powerful warlord and his men, a group of vicious baboons trying to bite and grab them, and a maze of rickety wooden bridges placed above a high chasm, people fall from the bridges but are mostly rescued, people fight with warlords and other people, punching and kicking, people are tossed through walls and pillars, man is rescued after almost falling from a cliff, man is grabbed and swallowed by a snake, but he’s in a video game and has two more “lives” left, rocket blows people up, but they have one video game life left, giant hippo tries to attack man, but he escapes, man hangs for dear life onto rope dangling from a blimp, head villain feeds pieces of meat to two vicious giant hyenas, and he jokes that it’s the body of their trainer who defied him, people race against the rampaging herd of ostriches that pierce the roofs of their vehicles with their beaks, etc.
Sex:
No implied or depicted sex scenes, but a few passionate kisses, and man wants to follow his video game character’s old flame to her room
Nudity:
No nudity
Alcohol Use:
No alcohol use
Smoking and/or Drug Use and Abuse:
No smoking or drugs; and,
Miscellaneous Immorality:
Man holds a grudge against his former business partner and has a negative view of growing old, but this changes for the better, two characters lie their way into the villain’s lair.

JUMANJI: THE NEXT LEVEL is a continuation of the JUMANJI reboot series of comedy adventures, with now college-age friends having to return to the mystical video game to rescue their friend and to save Jumanji from a mean and powerful warlord bringing death and desolation throughout the land. JUMANJI: THE NEXT LEVEL is an entertaining, funny, exciting comical adventure with some positive lessons about friendship, but it contains lots of foul language, including some strong offensive profanities, so MOVIEGUIDE® advises extreme caution.

As the movie opens, Spencer returns to his hometown from Columbia University in New York City for Christmas vacation. He’s supposed to be staying with his mother and her elderly father, Eddie, who’s recovering from a hip replacement. Spencer is scheduled to meet up with his three high school friends Bethany, Fridge and Martha. Spencer recently broke up with Martha because he feels inadequate since they left the Jumanji video game where he took on the video game character of Dr. Bravestone.

In the basement of his mom’s house, Spencer finds the Jumanji game and decides to return to Jumanji. His three friends come looking for him. They find the game and decide to return to Jumanji to rescue Spencer. However, the game only transfers Martha and Fridge to the game, along with Spencer’s grandfather and the grandfather’s estranged friend, Milo, who’s stopped by for a visit. This time, the grandfather becomes Dr. Bravestone, Milo becomes the zoologist Mouse Finbar, Martha is still the martial arts expert Ruby Roundhouse, and Fridge becomes the chubby cartographer Shelly Oberon.

After some comical business with Milo and Spencer grandfather discovering the goofiness in the video game world, the game’s non-player character, Nigel, explains the game’s new story. They must retrieve a magical jewel from the powerful new villain, Jurgen the Brutal. When activated by the sun’s energy, the jewel keeps the whole land of Jumanji fertile. Jurgen has hidden the jewel in a box, so drought and desolation have begun to engulf the land. The team has to find Spencer and find a Jumanji berry, the one thing that weakens Jurgen.

JUMANJI: THE NEXT LEVEL is an entertaining, funny, exciting comical adventure. The heroes must overcome a rampaging herd of mean giant ostriches, a crazy congress of vicious baboons and a maze of rickety wooden bridges to get to Jurgen’s lair. During their quest, Martha and Spencer have to reconnect, and Grandfather Eddie must reconnect with his friend, Milo, who sold their restaurant to retire with his late wife. Selling the restaurant took away Eddie’s reason for living. He’s held a grudge against Milo ever since.

THE NEXT LEVEL is about loving your friends and family. Happily, the movie has fewer gender-bending, sexual jokes when compared to the first JUMANJI reboot, which was subtitled WELCOME TO THE JUNGLE. However, like too many PG-13 tentpole movies recently, it still has lots of foul language, including more than several strong profanities. Therefore, despite its positive qualities, JUMANJI: THE NEXT LEVEL is not an appropriate movie for families with younger children and teenagers, and MOVIEGUIDE® advises extreme caution.

Watch JUMANJI: THE NEXT LEVEL: