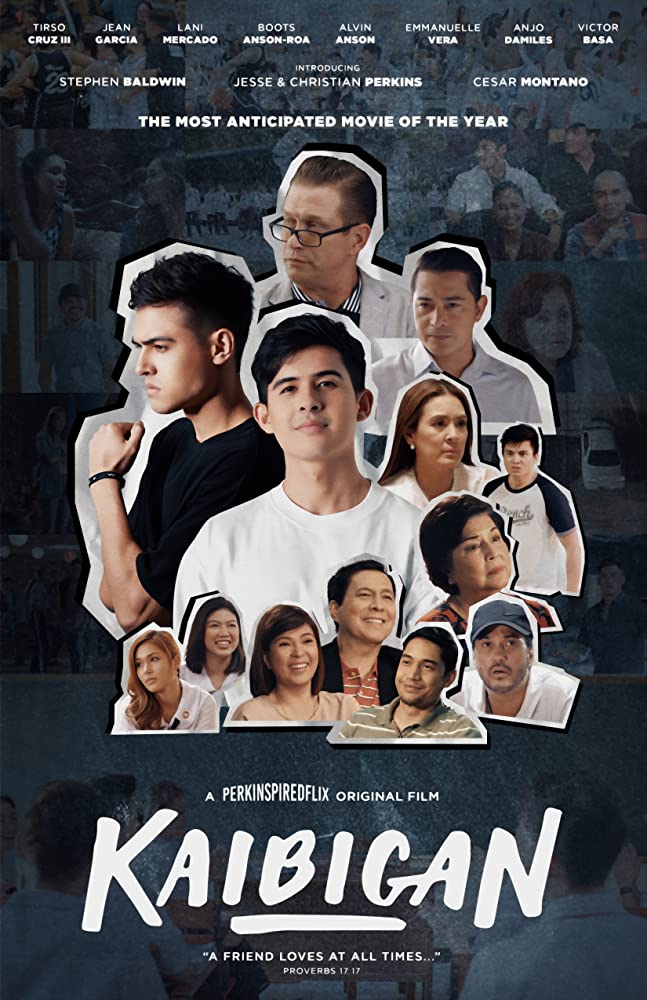 KAIBIGAN is a faith-based movie on VOD that follows two teenage boys, Jake and David. After Jake gets expelled from his private school for drunk driving, he winds up at National High, a public school where David and several other Christian students go to public school. Regrettably, Jake struggles with the desire to seem cool to his peers and attract the attention of his busy father. David is a good role model for others. However, he’s his own worst enemy when it comes to achieving success in both the classroom and his personal life, including trying to meet his father’s high standards for behavior.

KAIBIGAN is a great example of a grassroots marketing campaign to generate awareness of a Christian movie and its many positive themes. Sadly, it lacks some needed polish when it comes to the script and some wonky cinematography. KAIBIGAN has a very strong Christian worldview stressing friendship, family and forgiveness. Although KAIBAIGAN is rich with worthwhile messages for all ages, some violence and references to underage alcohol abuse and drug use warrant caution for older pre-teenage children.

(CCC, BBB, VV, N, AA, DD, M):
Dominant Worldview and Other Worldview Content/Elements:
Very strong Christian and biblical/moral worldview, characters are encouraged to follow God’s will for their lives, an emphasis on respecting authority and honoring parents, a clear depiction of a strong two-parent household and spouses supporting one another despite shortcomings, the Bible is seen being read and held, and Holy Scripture is quoted throughout the movie, characters exhibit practices of prayer and faith, one of the characters is wearing a “what would Jesus do” bracelet that he uses to share the Gospel, and one of the characters wears a cross necklace
Foul Language:
No foul language
Violence:
A character gets in a car crash, mild blood is shown, a couple of fist fights occur throughout, a character uses brass knuckles in one of the fights, character threatens someone with a gun and knife, a character offers a gun as a gift, a gunshot happens off screen but no one is shot, implied threat with a baseball bat, and physical bullying
Sex:
No sex
Nudity:
Brief upper male nudity at a party Alcohol: Alcohol abuse at a party, drunk driving which results in a car crash, brief drinking in a bar, drunk teenagers in a car
Smoking and/or Drug Use and Abuse:
No smoking but drugs are briefly shown being sold, drug is offered between friends as a gift, drugs passed around at a party, but viewers don’t witness the drugs being taken; and,
Miscellaneous Immorality:
Lying, gambling, some disrespect to elders, and bad sportsmanship.

KAIBIGAN is a faith-based movie on VOD that follows two rival teenage boys who become friends and must grapple with their personal shortcomings along the way. KAIBIGAN has a very strong Christian worldview with an emphasis on friendship, family and forgiveness, but some violence and references to underage alcohol abuse and drug use warrant caution for older children.

The movie opens with Jake Anderson (Christian Perkins) holding a guitar on stage. He addresses the audience and says he wouldn’t be standing there if it weren’t for a “kaibigan.”

Cut to a basketball game between David Santos’ (Jesse Perkins) National High and the private school Jake attends. The rival basketball players battle it out until the final buzzer, but a game-winning shot by Jake sends David and his team home. David’s coach (Alvin Anson) encourages the team to keep their heads up and that, no matter what, they win and lose together.

David offers to walk Sarah home after the game, and Jake attends a party to celebrate his win with his private school friends. After leaving his girlfriend at the party, Jake drives while intoxicated and is egged on by his peers to street race. David says goodbye to Sarah and walks home when he witnesses Jake swerving around traffic and crashing his car. David sees Jake unconscious, helps him get to the hospital and waits until Jake’s mother shows up.

Two weeks later, Jake recovers from the car crash and returns home. Upon arriving at his private school, Jake is ready to get back to his normal life and see his friends. However, as a result of the shameful accident, Jake’s girlfriend breaks up with him. On top of that, Jake is called into the principal’s office where he’s told he can no longer attend the private school. Although Jake’s grandmother and mother are still supportive, Jake ultimately seeks approval from his father, who sees his son as a foolish loser.

Jake is forced to attend public school at National High. The guidance counselor at National High instructs David to help the newcomer get acclimated, but Jake is resistant to his new life at public school. Although David’s father disapproves of any association with Jake, David decides to reach out and befriend Jake. Jake must decide whether he wants to continue to live selfishly or humble himself enough to receive help from those around him.

KAIBIGAN is a great example of a grassroots marketing campaign to generate awareness of a movie and its positive themes. Sadly, it lacks some needed polish when it comes to the script and it has some clunky cinematography. The pacing of certain scenes could benefit with more tightening. Also, although the movie’s message is inspiring, the on-the-nose dialogue could be improved by adding more subtlety.

KAIBIGAN has a very strong Christian worldview with an emphasis on friendship, family and forgiveness. The movie’s Christian, biblical themes and references are at the forefront of the characters’ purpose and growth as they navigate hardships within their families and lives. KAIBIGAN is rich with worthwhile messages for all ages, but some violence and references to underage alcohol abuse and drug use warrant caution for older pre-teenage children.