"Trapped in the Past" 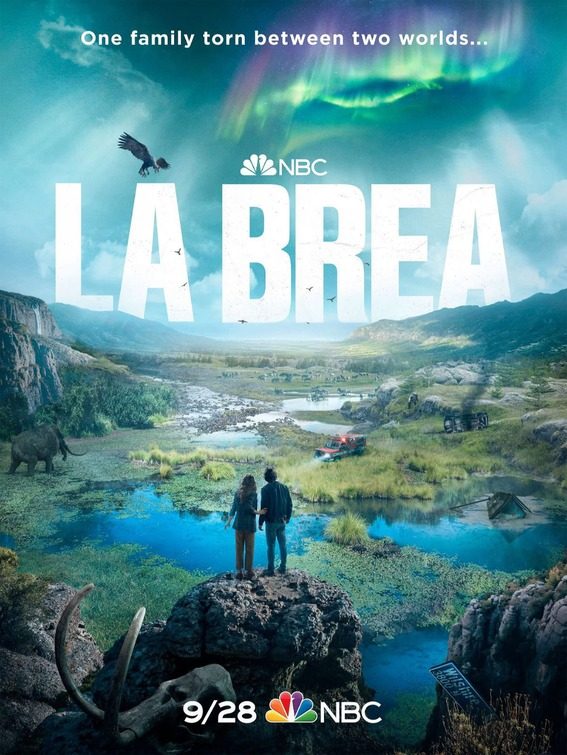 LA BREA is a new science fiction drama on NBC. In the first four episodes, a group of people fall into a gigantic sinkhole in Los Angeles and through a time warp back to 10,000 BC. The people run across some mysteries and search for food. They also run into a pack of wolves, and three people encounter two sabre-tooth tigers. Also, a young woman, who took pre-med, ministers to two wounded people. Meanwhile, the lead female character’s estranged husband works with the government to rescue his wife, son and the other trapped people.

The first four LA BREA episodes are exciting and heroic. There’s lots of jeopardy and terrific plot development. So far, LA BREA seems to have a strong moral worldview stressing family and helping people. It also has some positive references to God. However, one character says he’s an atheist, and one believer seems to be judgmental. The first four LA BREA episodes also contain some foul language (including several Jesus profanities), references to past adultery and a man guarding packs of heroin in the trunk of his car.

(BB, Pa, Ab, H, Ho, LL, VV, S, A, DD, M):
Dominant Worldview and Other Worldview Content/Elements:
Strong moral worldview stresses family and helping other people, and includes about three positive references to God in first four episodes of series (no references to the Gospepl or the Bible, however), but some people are flawed, and two or three others seem to be evil, one believer in God seems to be judgmental and hiding something, one character says he doesn’t believe in God, and there’s a homosexual reference in Episode One
Foul Language:
25 obsenties, five Jesus profanities and 10 light profanities over four episodes (totaling 10, 13, seven, and 10)
Violence:
Strong and light violence in first four episodes includes people and vehicles fall through gigantic sinkhole, one of small jet’s two engines catches on fire, jet falls from sky but lands mostly intact, a pack of prehistoric wolves chases and attacks people (one person is injured and his wound gives him a terrible fever for one night, but he’s nursed back to health), wolves drag off one man, giant ground sloth rummages through group of people’s food supply, man with terminal cancer starts to shoot himself, but lead female character stops him, two sabre-tooth tigers attack three people, one man falls over a small cliff and injures his bacl, man shoots a tiger dead, second tiger falls into a pit with sharp stakes in it, man with injured back has fluid drained form his back so he can walk again
Sex:
References to past adultery and a reference in one episode to homosexuality
Nudity:
No nudity
Alcohol Use:
Brief alcohol use
Smoking and/or Drug Use and Abuse:
No smoking, but man has packs of heroin in trunk of his car and another man takes the packs and hides them, but gives a little to woman who uses a small amount as a painkiller to perform a minor operation on her father, but the drug dealer clearly wants his missing heroin back, and an atheist character has anxiety issues and vapes medical marijuana in one episode; and,
Miscellaneous Immorality:
Lying, people argue, and government hides truth from the public.

LA BREA is a new science fiction drama on NBC about a group of people who fall through a time warp back to 10,000 BC in a gigantic sinkhole in Los Angeles, their efforts to get back home, and the efforts to rescue them led by the estranged husband of one of the women. The first four episodes of LA BREA are exciting, compelling and heroic, and promise a highly watchable program, but there’s some foul language in each episode and references to adultery and to a stash of heroin that one of the stranded people is trying to guard.

The first four episodes focus on Eve, the estranged wife of Gavin, an Air Force pilot who started seeing strange visions after a weird accident. Eve and her son, Josh, along with a group of other people, fell through a time warp back to 10,000 BC when a huge sinkhole opened up in the middle of Los Angeles. Eve’s daughter, Izzy, watched her mother and brother fall.

Everyone on top of the sinkhole, including government officials, friends and family members, think their loved ones are dead. However, Gavin has visions that Eve and Josh are still alive. Gavin realizes that the visions he’s having are visions of a primeval Los Angeles thousands of years ago. The government discovers a band of bright light inside the sinkhole. When Gavin tells the government his visions, they start sending drones to examine the sinkhole and the apparent time warp.

Meanwhile, the survivors of the sinkhole incident see a saber-toothed tiger. Also, a giant ground sloth eats most of the modern packaged food that fell through the time warp. The survivors also recognize the landscape around them as being exactly like the famous Hollywood Hills in Los Angeles, but only thousands of years ago.

As the survivors start hunting for food, including some edible mushrooms, in the third episode, they run across a fortified village with a wall and grass huts. Eve, Josh and a few other survivors discover the corpse of someone with a T-shirt.

Up top, Gavin recommends his old pilot friend, Levi, to fly the first small plane through the time warp. Gavin doesn’t know, however, that, after he started having mental issues and started drinking too much, Levi started an affair with Gavin’s wife, Eve. A flashback reveals that Levi took off for a lengthy assignment in Berlin when Eve and Gavin’s daughter, Izzy, had a terrible car accident, which forced doctors to amputate the lower part of Izzy’s left leg. Levi blamed himself, even though his affair with Eve wasn’t involved directly in Izzy’s accident.

LA BREA is one of those ongoing TV adventure series that places people in a weird situation that seems never-ending. Like the popular TV series LOST, or the recent program MANIFEST, each episode reveals more information and leads to new problems and mysteries to solve.

LA BREA is a good representative of this subgenre. The first four episodes are exciting, compelling and heroic. They promise that LA BREA could be a highly watchable program. Of course, this doesn’t guarantee that every episode will be a gem, or that somewhere along the line, LA BREA won’t seriously stumble. For example, LOST was an excellent series, with many wonderful twists, but the ending turned out to be predictable and theologically stupid.

The first four LA BREA episodes are morally uplifting overall. People help each other, and positive relationships among families are extolled. It also has some positive references to God. However, in one episode a character says he’s an atheist, while a believer seems to be too judgmental and emotionally distraught. The first four episodes also contain some foul language, including five Jesus profanities in three episodes. There are also references to adultery, a corrupt female police detective, and a man who has packs of heroin in the trunk of his car, which also fell through the time warp with him. Finally, the first episode makes a brief reference to a homosexual couple. Sadly, these days no TV program, including programs for children and families, is totally safe from politically correct references to LGBT lifestyles. For now, however, MOVIEGUIDE® advises caution for older children, teenagers and impressionable adults.