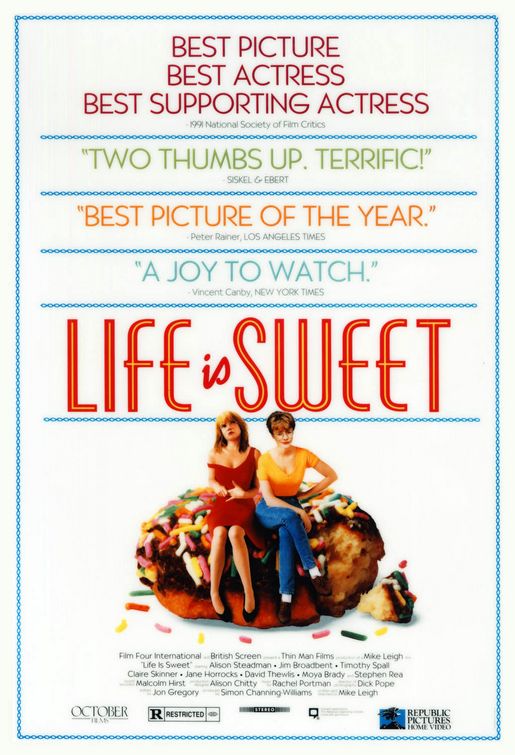 LIFE IS SWEET is a slice-of-life film about a working class British family that sticks together amidst hard times. One daughter is a fowl-mouthed youth who fornicates and practices bulemia. Mom's pro-life stance on abortion and selfless love for her family are overshadowed by the film's offensive language, explicit nudity and fornication.

LIFE IS SWEET is a slice-of-life film about a working class British family. The dad, Andy, is an industrious worker who dreams of making it with his catering truck. His optimistic wife, Wendy, holds several jobs to make ends meet. Together, they parent twin teenagers: Natalie and Nicola. Natalie is a plumber who dreams about visiting America. Nicola is a problem child who loafs around the house. Too lazy to work, Nicola is a fowl-mouthed youth who sleeps with her boyfriend and practices bulemia. In an argument with Nicola, Wendy remarks that although she and her husband were not ready for children, abortion was not an alternative because she had two precious lives inside of her.

The script for LIFE IS SWEET was written after months of improvisation by the actors. As a result, the movie does not move forcefully to a conclusion. At best, LIFE IS SWEET spotlights a family that sticks together amidst hard times and a mother who cherishes her children. LIFE IS SWEET affirms that life, with all of its happy and sad times, is worth living to the fullest. Regrettably, offensive language, explicit nudity and fornication overshadow the good points in the film.