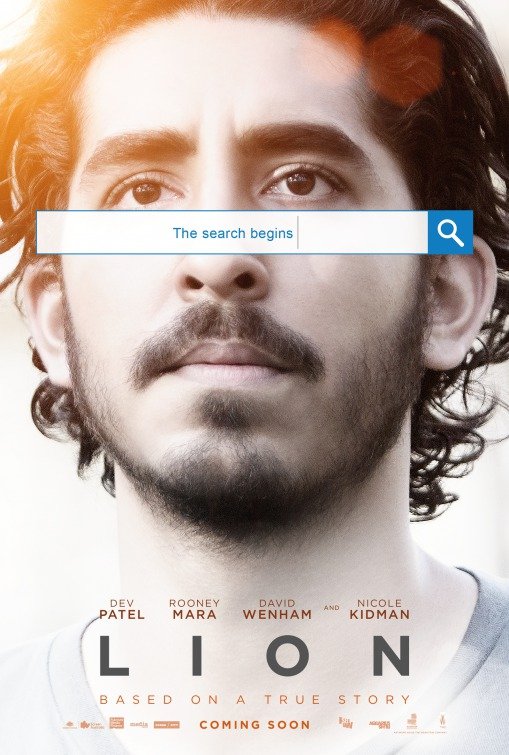 LION is the emotional true story of an Indian man, who got lost as a child and adopted by Australian parents. As a little boy, Saroo is separated from his brother when he accidentally gets stuck on a decommissioned train that takes him 1,600 miles away to Calcutta. After living for weeks on the streets, Saroo is placed in a state orphanage and adopted by a white couple in Tasmania. Twenty years later, he spies a piece of Indian pastry that brings back a flood of memories. Using Google Earth, Saroo begins to search for his hometown to find his mother, but the search becomes an obsession.

LION is superbly made and extremely emotional. The young actor who plays Saroo almost steals the whole movie, not just the viewer’s heart. The ending is very powerful. LION has a strong moral, pro-family worldview overall. Happily, LION has no foul language, but Saroo lives with his girlfriend, and he is seen waking up three times next to her. Finally, LION has a positive but generic reference to God and two overt references to Hinduism.

(BB, FR, Pa, V, S, N, AA, DD, M) Strong moral, pro-family worldview includes one person says a character has died and is now with God and themes of honoring one’s parents, about a boy who gets lost on a train across India 1600 miles away from his biological mother and siblings, with a scene where hungry lost boy pauses before a Hindu shrine and appears to pray briefly silently before taking some of the food offerings, and a man tells boy his name is Rama, but he’s not the god; no foul language; light violence such as two boys jump onto and off a train, a little boy carrying a watermelon is grazed by a passing motorcycle leaving a cut on his head, troubled young man hits his head repeatedly when his adoptive brother harshly condemns his behavior at dinner; implied fornication between couple in three scenes where they lie together in bed, with some light kissing in one scene, and man caresses sleeping woman’s hand in a second scene; some images of upper male nudity; family drinks wine at dinner, party scene with drinking, and drunkenness in one scene; protagonist’s adoptive brother smokes and there’s a reference to him “getting back on the hard stuff”; and, young boys steal coal to provide for their impoverished family, woman says she was inspired to adopt children from India when she had a vision as a young girl, men kidnap a group of children trying to sleep in a subway, but the young protagonist escapes, and apparent predator says little boy is exactly what “they” want but the boy escapes and runs away.

LION is the emotional true story of an Indian man who got lost as a child on a train across India and is adopted by two loving parents in Tasmania. LION is a simple yet incredible story with very powerful, inspiring scenes, with little objectionable content, but the protagonist lives with his girlfriend, so there are three scenes of them waking up in bed together as the man becomes obsessed with trying to locate his birth mother.

The movie opens with adorable 5-year-old Saroo and his older brother, Guddu, climbing aboard a moving train to steal some coal to provide for their impoverished mother and sister. One day Saroo convinces Guddu to take him with him when Guddu has to go away for a week to work as a night laborer. At a train station, Guddu disappears for five minutes to find work and tells Saroo to wait for him on a bench. Saroo nods off. When he wakes up, Guddu hasn’t returned, so Saroo gets aboard a decommissioned train to look for Guddu. Saroo falls asleep again, and the train takes him 1600 miles east to Calcutta.

Sleeping on the streets and taking food from a Hindu shrine, Saroo runs away from some men kidnapping children. He also runs away from a nefarious couple that seems to befriend Saroo but act suspiciously. Eventually, a young businessman takes pity on Saroo and brings him to the police, who take him to a state-run orphanage full of hundreds of street children and orphans.

Saroo gets adopted by a white couple in Tasmania, John and Sue. A year later, they adopt another boy from India named Mantosh, but he doesn’t fit in as well as Saroo.

Twenty years later, Saroo attends some courses for hotel management. He falls in love with a young woman named Lucy. One night, at a party with some other friends from India, Saroo notices a pastry that brings him back to his travels with his brother. Saroo breaks down, and his friends learn about his story of getting separated from his brother and losing track of his mother. They encourage him to use Google Earth photos to try to find the hometown where he lived. However, Saroo becomes obsessed with his search, which threatens to ruin his life. He’s also miscalculated the mileage of the train which took him away.

So, the question becomes, will Saroo ever find his mother and family?

Based on a true story, LION is a beautifully made, extremely emotional and inspiring story. The ending is very powerful. Newcomer Sunny Pawar almost steals the whole show as young Saroo. However, Dev Patel also delivers an excellent performance as the older Saroo. Rooney Mara as Lucy and Nicole Kidman as Saroo’s adopted mother are also effective in a superb ensemble cast.

LION has a strong moral, pro-family worldview overall. Saroo is moved to find his mother and brother mostly out of concern for them. He not only honors his biological mother, but also the married couple that adopts him. Happily, LION has no foul language, but Saroo lives with his girlfriend. During the search for his family, he’s seen waking up three times next to her. Also, his adopted brother is a troubled young man, and there is brief mention in one scene that he’s back on the “hard stuff.” Finally, there is a positive reference to being with God in the afterlife, but in a generic way. The only overt references to Hinduism are when Saroo takes the food from the Hindu shrine, and when a minor character mentions that his name, Rama, is the same as the name of a Hindu god.