"Scenes from a Divorce" 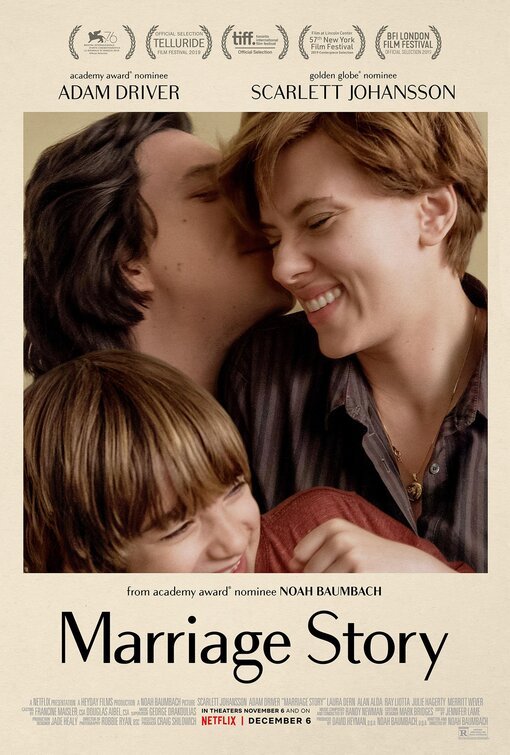 MARRIAGE STORY is a misleading title, because the movie is actually about two married theater people going through a divorce. Charlie owns and directs a theater company in New York, which produces plays starring his wife, Nicole. They have a young boy named Henry. However, Charlie repeatedly broke his promises to Nicole that they would move to Los Angeles so Nicole could pursue a Hollywood career and be closer to her mother and sister. So, Nicole has asked for a divorce. The divorce becomes increasingly rancorous when she hires an aggressive, feminist divorce lawyer and Charlie retaliates.

Scarlett Johansson and Adam Driver both deliver superb performances as the couple in MARRIAGE STORY. The movie is also often emotionally powerful and poignant. That said, MARRIAGE STORY has lots of strong foul language, plus a really crude lewd comment in one scene. Finally, the movie has no spiritual or religious content. Thus, MARRIAGE STORY has a low-key humanist worldview, even though the couple clearly cares about their son and even though the feminist lawyer comes across as a despicable person. MOVIEGUIDE® advises extreme caution.

(HH, FeFe, B, PC, Ab, Ho, LLL, V, S, N, AA, D, M):
Dominant Worldview and Other Worldview Content/Elements:
Humanist story about a divorce between a married theatrical couple that becomes increasingly rancorous when the woman hires an aggressive feminist divorce lawyer, which eventually only makes the man want to retaliate, but the feminist lawyer is clearly not a nice person, the movie contains some morally uplifting and poignant moments, and the feminist lawyer can be seen in even a worse light when she suddenly goes into a politically correct rant against Judeo-Christian marriage (her female client doesn’t seem to agree with her in the scene), plus a couple crude homosexual insults
Foul Language:
64 obscenities (including many “f” words), seven strong profanities (four GDs and three JC related), one light profanity
Violence:
Man fools around with a pocket knife to show off and ends up cutting his arm and almost passes out, and man punches his fist through a wall and creates a hole
Sex:
Woman makes a crude homosexual comment toward two men, there’s another obscene homosexual obscenity in another scene, and there’s brief talk and references in three or more scenes about a man getting a divorce who slept with a woman in the theater company he owns and runs
Nudity:
Upper male nudity in a couple scenes
Alcohol Use:
Brief alcohol use and woman admits to being a little bit tipsy as she walks down some stairs
Smoking and/or Drug Use and Abuse:
Brief smoking; and,
Miscellaneous Immorality:
Some lying, manipulation and heavy arguments in the movie’s divorce plot.

MARRIAGE STORY is a misleading title, because the movie is actually about two married theater people going through a separation and divorce, which becomes increasingly rancorous when the wife hires an aggressive feminist divorce lawyer. The performances by Scarlett Johansson and Adam Driver in MARRIAGE STORY are excellent, and the movie is emotionally powerful and poignant. However, although the couple cares about their young son, their lives are devoid of any spiritual or religious meaning. There’s also lots of strong foul language.

The movie opens with Charlie and Nicole reciting positive things they like about each other, while images illustrating their words play on the screen. Cut to a divorce counselor’s office. Charlie and Nicole are supposed to read the things they’ve written down, but Nicole suddenly refuses. She storms out of the office when Charlie sides with the counselor’s belief that the exercise will help them better navigate the ups and downs of their divorce. Nicole’s actions upset Charlie, who says he thought Nicole had agreed to have an amicable divorce.

Since they’ve been married, Nicole and Charlie have lived in New York, where Charlie runs a theater company. The company has become a showcase for Nicole as the lead actress in the plays Charlie writes and directs. However, Nicole wants a divorce and has accepted a job offer in a TV pilot out in Los Angeles, where her mother and sister live. Nicole takes their son, Henry, with her. When she gets to Los Angeles, a female producer recommends that Nicole hire an aggressive feminist divorce lawyer, even though Nicole has apparently agreed with Charlie not to hire divorce lawyers.

As the movie unfolds, it reveals that, during all the years they were married, Charlie kept promising Nicole that, at some point, they would move to Los Angeles for a while so Nicole could pursue a Hollywood career and be closer to her mother and sister. However, Charlie kept putting it off, even though he always seemed verbally amenable to the idea. As a result, Nicole became increasingly resentful and finally pushed for the divorce, to which Charlie agreed. Making matters worse, after they agreed to separate, Charlie had a brief affair with a woman in his theater company.

Of course, when Charlie learns that Nicole’s hired a high-powered female divorce lawyer, he’s not very happy, to say the least. Charlie hires an easygoing, older divorce lawyer. He advises Charlie to commute back and forth between New York and Los Angeles to show the family court that he truly wants to retain joint custody of Henry. However, Nicole’s feminist lawyer keeps exacerbating things, pushing Charlie to the limit.

In one sequence, Charlie is looking forward to going trick or treating with Henry. Charlie’s theater company has even made costumes for them, a Frankenstein costume for Henry and an Invisible Man costume for Charlie. Halloween was supposed to be Charlie’s night with Henry, but Nicole has arranged for Henry to attend a Halloween Party and go trick or treating with her family. Sadly, also, Henry has changed his mind and would rather wear a superhero costume rather than a Frankenstein costume. Adamant about spending time with his son, Charlie ends up late at night dragging Henry around some apartment complexes and stores in Hollywood to go trick or treating.

As a result of all this, things keep getting worse and worse between Charlie and Nicole. It looks like the amicable divorce Charlie envisioned is a pipe dream.

Scarlett Johansson and Adam Driver both deliver superb performances in MARRIAGE STORY. Perhaps the movie’s most poignant scene, however, comes when Adam Driver as Charlie, after the divorce is finalized, sings an impromptu version of Stephen Sondheim’s moving ballad about relationships, “Being Alive,” from the play COMPANY. Near the end of the movie, Charlie is sitting with his theater company at a nightclub and expressing his bitterness over his breakup and divorce with Nicole. Suddenly, he breaks out in the Sondheim song, which basically says that it’s better to be with someone than to be alone, even if the relationship sometimes breaks your heart or doesn’t work out at all, even when the other person “holds you too close” or “hurts you too deep.”

One of the more interesting aspects of MARRIAGE STORY are the scenes with the feminist divorce lawyer Nicole hires, played by Laura Dern. The lawyer comes across as a loathsome man-hating feminist. To her, men are nothing but despicable pigs. She even goes on a rant at one point against the Judeo-Christian culture of heterosexual marriage. Thus, even though the lawyer and Nicole make some good points about Charlie’s history of not paying attention to his wife’s needs during their marriage, her aggressive feminism engenders some solid criticism during the movie. It also becomes clear in MARRIAGE STORY that the divorce system, as depicted in the movie, is rigged against fathers and men. So, one can’t help but side with Charlie when, during a long, particularly intense argument between him and Nicole in Charlie’s small Los Angeles apartment, Charlie eventually breaks down crying, and Nicole is moved to comfort her ex.

That said, MARRIAGE STORY has lots of strong foul language. Also, a character makes a really crude sexual joke in one scene. Finally, as noted above, the movie has no spiritual or religious content. This is ultimately annoying, because, at the end of the day, heterosexual marriage is an institution established by God (see Genesis 2:28 and Matthew 19:1-12 in the Bible), for the benefit of both men and women. Marriage between a man and a woman is intended to work with God, and especially with Jesus Christ, not without God or Jesus, and certainly not against them. Maybe an enterprising Christian screenwriter should write a script about a Christian couple going through the ups and downs of a marriage, including children, with Jesus.