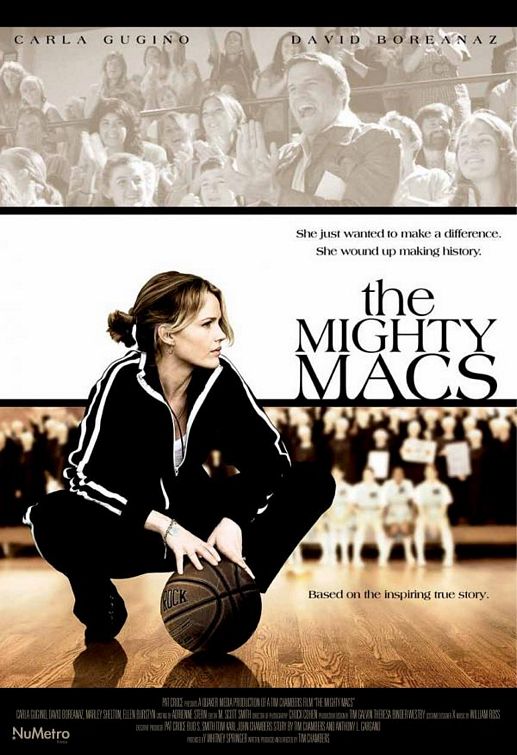 THE MIGHTY MACS is based on the true story of Cathy Rush. In 1971, Cathy is hired as the women’s basketball coach at Immaculata College, a small all-women Catholic school in Philadelphia. Cathy is very excited to work with the girls and get the team ready for competition, but she finds that others aren’t as enthusiastic about the team’s chances of winning. Mother Superior and the school board are more concerned with the school’s dire financial state. Also, her new husband wants children and believes a married woman doesn’t need to work outside the home. The more the team practices, the more their hard work begins to pay off. As the team gains support, the girls learn to fight for what they believe.

The story of THE MIGHTY MACS is an inspiring one that focuses on working hard and striving for your dreams. The actors bring the characters to life in a unique way. That said, the script has too many things happening in it. Also, the protagonist has very little character arc. Finally, THE MIGHTY MACS has strong Romantic, feminist elements that undermine its Christian content and moral values.

(CC, BB, RoRo, FeFe, L, V, A, M) Strong Christian, moral, biblical worldview from a Catholic viewpoint with a strong woman in the lead, multiple scenes in Cathedral at Catholic school with references to Scripture passages, but some strong Romantic, feminist elements; one use of the “h” word; action violence during basketball games when girls get aggressive; no sex or salacious content as husband and wife kiss; no nudity; couple have wine to celebrate, two women have a drink in a bar (one of which is a nun); no smoking or drugs; and, a nun lies to protect a friend and basketball coach forces the girls to run in a giant drainpipe in freezing cold weather as discipline.

THE MIGHTY MACS is based on the true story of Cathy Rush, who in 1971 is hired as the women’s basketball coach at Immaculata College, a small all-women Catholic school in Philadelphia.

When she applies for the job, Cathy knows only three things about the school: it’s an all-girls school, the basketball team isn’t very good, and the school is run by nuns. When she’s hired, she finds the college is out of money so she will have to work hard to find everything the team needs, including a place to practice since the old gym burned down a few years earlier.

Cathy is very excited to work with the girls and get the team ready for competition, but she finds that others aren’t as enthusiastic about the team’s chances of winning. Mother Superior and the school board are more concerned with the school’s dire financial state, and the other nuns just don’t seem to care.

However, Cathy doesn’t let that slow her down on her journey to put together a winning basketball team. She pushes the girls extremely hard and encourages them to commit themselves to their dreams of playing basketball.

Sadly, the issues at school aren’t the only difficulties Cathy faces. Her new husband, NBA referee Ed Rush, isn’t as thrilled about her new job as she is. He wants children and believes a married woman doesn’t need to work outside the home. Cathy struggles to get him to understand her need to follow her dreams even if it means putting off a family.

The more the team practices, the more their hard work begins to pay off. Eventually, the girls realize that being from a smaller school doesn’t mean they will always lose. As they gain support from the nuns and the community, the girls learn to fight for what they believe. Before a pivotal game, Cathy encourages the girls to “run to win the race” as Paul advised in 1 Corinthians 9. The nuns often show their support at games with posters referencing different Bible passages.

The story of the Immaculata Macs is an inspiring one that focuses on working hard and committing yourself to your dreams. All of the actors do a great job portraying real people, and they brought the characters to life in a unique way.

Even though the movie has much to commend it, there are some significant flaws. There is some great dialogue diminished by some very static dialogue. Also, the script doesn’t a focused premise, so it tries to go in too many directions with several premises competing to drive the plot, such as: 1) the very Romantic “follow your dreams” premise; 2) the moral premise to work together as a team by putting others first; 3) the feminist premise that women should pursue their own gifts in contrast to the teamwork premise; and, 4) the humanist premise that hard work wins the championship. In fact, there are a few more premises taking the movie in different directions.

The scriptwriter shows the contradictory pulls in the first scene where Cathy is listening to the news on the radio report on: protests over the Vietnam war; President Nixon’s political problems; and, feminist demonstrations. Any one of these premises would have sufficed to drive the movie to an exciting climax, but together they step on each other’s toes. At the end, Cathy says she doesn’t know why the team won, and neither does the scriptwriter. Of course, Christians would hope that God answered the prayers of the Mother Superior and the nuns so that the victory helped the college could continue to educate Catholic students.

Another significant problem with MIGHTY MACS is that Cathy has very little character arc. She remains a very headstrong, defiant woman throughout the movie. Great movies have heroes who have significant character growth. Finally, the Christian content is somewhat muddled and confused throughout the movie, although it’s clear this is a Christian story, what with all the crucifixes and Bible references.

Despite all its problems, THE MIGHTY MACS holds the viewer’s attention. It also has a good development of its sports themes. Furthermore, the movie has good, clear moral values.

Therefore, in the final analysis, THE MIGHTY MACS is commended with a caution for children.