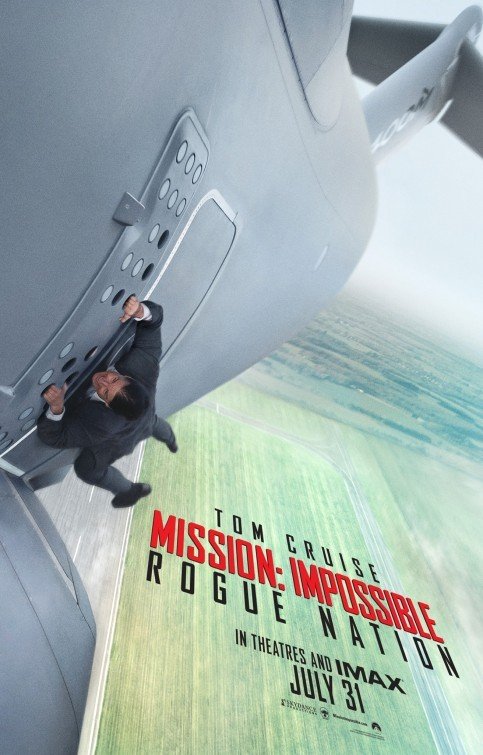 MISSION: IMPOSSIBLE – ROGUE NATION opens with super-agent Ethan Hunt singlehandedly stopping a plane full of nerve gas. Ethan and his team have been hunting a mysterious international syndicate of former spies headed by former British agent Solomon Lane. However, the US government has disbanded the IMF, so Ethan and his team must stop Solomon Lane and the Syndicate on their own. Eventually, they uncover information from a secluded computer in Casablanca that will expose the Syndicate, vindicate Ethan and set the world right again.

MISSION: IMPOSSIBLE – ROGUE NATION is one of the most fun, exciting popcorn movies in 2015. It is so well executed that the many silly plot devices and plot holes disappear into the action and adventure. ROGUE NATION has a light moral, redemptive worldview extolling friendship, self-sacrifice, loyalty, and often doing the right thing. However, this positive content is mitigated by some mature elements, including a high body count and some innuendo. There’s also a lot of deception and some brief foul language, mostly in the very beginning. So, extreme caution is advised for MISSION: IMPOSSIBLE – ROGUE NATION.

(B, C, Pa, PP, L, VV, S, N, A, DD, M) Light moral worldview about friendship, loyalty, and often doing the right thing, mixed with constant violence as well as deception, sexual elements and other immoral elements that detract from the moral worldview, with a redemptive element of self-sacrifice, plus some strong content promoting patriotic values of safeguarding liberty and nations involving the British prime minister and American spies and spy agencies; three strong obscenities and two strong profanities; nearly constant violence, most of which is just action adventure but some is extremely intense such as when man is stabbed in the neck, point blank shootings, a man known as the “bone crusher” takes out surgical instruments to torture people, lots of gunfights, car chases, explosions, nerve gas, people struggle to breathe through the nerve gas; some sexual innuendo, but nothing over the top, and only one hug at the end; upper male nudity, upper rear female nudity, skimpy costumes, bathing suit scenes; light alcohol use; no smoking, truth serums, drugs used in torture; and, lots of deception and espionage.

MISSION: IMPOSSIBLE – ROGUE NATION is one of the most fun, exciting popcorn movies in the last few months. It is so well executed that the many silly plot devices and plot holes disappear in the action and adventure. However, there’s a lot of mature content.

The movie opens with a Ukrainian or Russian plane loaded with a lethal new nerve gas, and the IMF team charged with stopping it. Benji, Brandt and Luther are trying desperately to stop the plan when our hero, Ethan Hunt, jumps onto the wing and hangs on the side of the plane as it takes off. Eventually, he enters the plane and parachutes down with the nerve gas before the plane crashes.

Cut to Ethan in London Ethan pursuing the Syndicate who were behind the lethal weapon heist. Reminiscent of the old TV show, Ethan goes into a record store and plays an Thelonius Monk and John Coltrane jazz record to be told his mission. Instead of his mission, the evil head of the Syndicate, Solomon Lane, tells Ethan that they’re going to kill him. Suddenly, nerve gas comes through the floor of the record booth. Ethan tries to get out and sees Lane execute the young girl at the record store.

The next scene has Ethan tied up and about to be tortured by the bone crusher. Just as it looks like all is lost, one of the villains, Ilsa Faust, frees Ethan, killing lots of people in the process. She may be a double agent, and she clearly likes Ethan. Consequently, Lane is starting to lose his faith in her.

The story shifts to a Senate committee listening to the head of the CIA, Hunley, played by Alec Baldwin, and the head of the IMF, played by Jeremy Renner. Hunley makes the case that the IMF needs to be shut down, because they are fighting an imaginary international Syndicate that the IMF imagines is trying to take over the world. In the process of this phantom menace, the IMF, especially Ethan Hunt, is causing a lot mass destruction. So after the Senate hearing, Ethan is a man without a country, and his IMF friends are not much better off.

Ethan tries to trap Solomon Lane at the Vienna Opera House. There, he finds that Ilsa and two other men have been sent there to shoot the Austrian prime minister.

Soon, the chase starts to uncover information from a secure, secluded computer in Morocco that will expose the Syndicate, vindicate Ethan and set the world right again. The attempt to uncover it involves acts of derring-do that are extremely well executed but that challenge all credibility when one reflects on them.

The plot of ROGUE NATION is similar to CAPTAIN AMERICA: THE WINTER SOLDER. Many people in the government may be on the wrong side, and Ethan and his three friends may be the only people standing for justice, loyalty and friendship.

Miraculously, each one of them has a pocket full of devices that can open any safe, take over any computer, and open any facility. In other words, the devices are impossible, keeping with the theme of the series. The movie is so much fun, however, that the impossible situations and devices become part of the jeopardy and humor.

Regrettably, however, there’s a tremendous mount of killing. Some of it regrettably even looks like a lot of fun. Rebecca Ferguson, who plays Ilsa, is like a young Scarlett Johansson. Her fight scenes are both titillating and impressive.

The movie has less Christian content and less moral content than the previous MISSION: IMPOSSIBLE movies. That said, MISSION: IMPOSSIBLE – ROGUE NATION is devoid of overt sexual content and only has a handful of obscenities and profanities. Sadly, most of the foul language is at the very beginning, setting the wrong tone for the rest of the movie.

The filmmakers in the past have produced some of MOVIEGUIDE®’s favorite movies. They understand story and plot. If they only understood to tone down a couple scenes, ROGUE NATION would have been a great movie for teenagers and adults. As it is, older fans of the series who love popcorn movies will enjoy MISSION: IMPOSSIBLE – ROGUE NATION. It’s the best crafted popcorn movie so far this year.