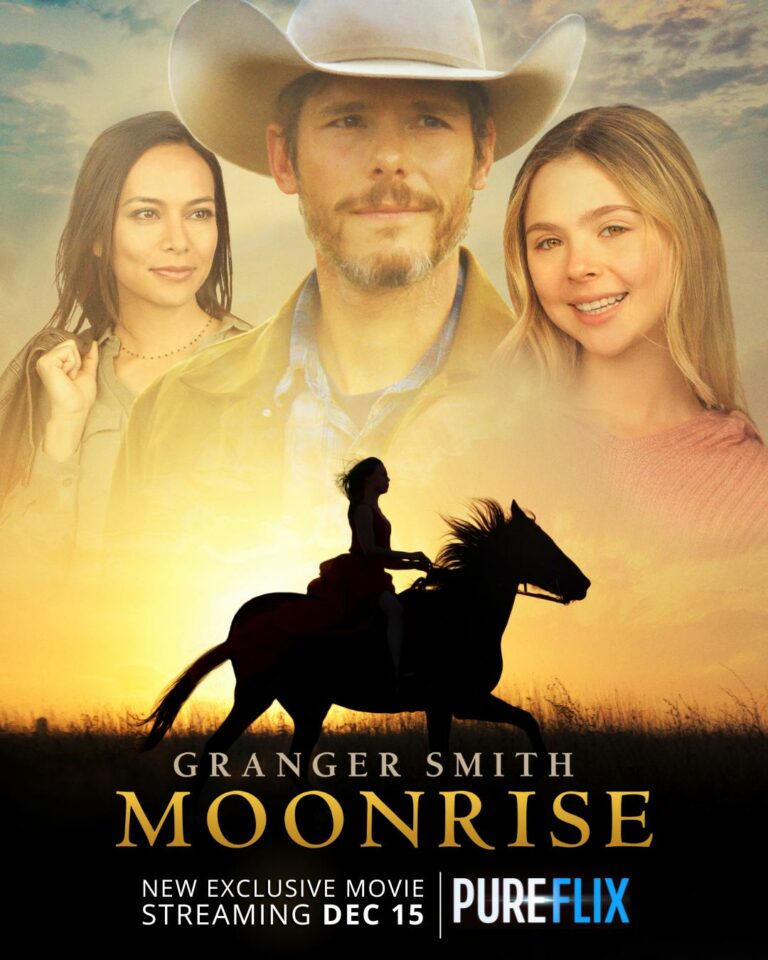 MOONRISE is a TV movie on Pure Flix. Will Brown is a successful country singer, but when his wife dies, he feels lost. Will and his children are each dealing with their grief in different ways. His daughter, Ellie, would love to ride her mother’s horse, but the horse has become wild and uncontrollable. Ellie hires a horse trainer named Sam, short for Samantha, who will stay with the family for two weeks. Will isn’t happy about this but allows it. Sam turns out to be a blessing, bringing warmth and love. When she confronts Will on dealing with his daughter, Will wonders if Sam should leave. Can Sam help heal this grieving family?

MOONRISE is an enjoyable movie with some heartfelt moments. The movie is well done, and the story is well plotted. Granger Smith does a great job in the main role as Will. MOONRISE has a strong Christian worldview with many positive messages. The movie promotes prayer and has a powerful Come-to-Jesus moment. MOONRISE deals with serious themes, but it tells a wholesome story the entire family can enjoy.

(CCC, BBB):
Dominant Worldview and Other Worldview Content/Elements:
Very strong Christian, moral worldview promotes prayer, forgiveness and other Christian, biblical, uplifting values and has a powerful moment when a major character must surrender to God and come to Jesus
Foul Language:
No foul language
Violence:
No violence
Sex:
No sex;
Nudity:
No nudity Alcohol: No alcohol use;
Smoking and/or Drug Use and Abuse:
No smoking or drugs; and,
Miscellaneous Immorality:
Nothing objectionable.

MOONRISE is a TV movie on Pure Flix about a successful country singer who becomes unstuck when his wife dies. MOONRISE is an enjoyable, wholesome movie with some heartfelt moments and strong Christian, evangelistic, faith-filled content, but there are some heavy themes.

Will Brown is a very successful country singer who lives on his family ranch with his children. After his wife passes, the entire family is shaken up. Will feels like he’s not been able to write music because of the depths of his grief.

Will’s daughter, Ellie, wants to ride her mother’s horse, but the horse has become wild and hard to control. Ellie really feels connected to the horse and would love to be able to ride her again one day soon. She calls in a horse trainer named Sam, short for Samantha, without her father knowing. When Sam shows up to the ranch, Will is surprised. However, since Sam has flown to the ranch and usually trains for two whole weeks, Will decides it’s okay if she stays and helps Ellie train the horse.

Sam happens to be a beautiful horse trainer who is very skilled at her job. When she sees the horse, she says it’s possible to train the horse, but it will take time and effort. Of course, being on the ranch for some time and spending time with Ellie, Sam also sees that Ellie’s need of her father’s attention. Sam decides to talk to Will about this and tell him that Ellie is grieving also and needs some love and affection. Will is taken aback by this, but sees that Sam is very loving toward his children and decides to take her advice.

Will the family be able to deal with the loss of their beloved mother and wife? Will Will start writing music again? Will the horse ever be able to be ridden again?

MOONRISE is a faith-based movie with many positive messages in the movie. The movie centers itself on a heavy theme about grief, but it shows that the main character must have a Come-to-Jesus moment. The movie also promotes prayer and displays a powerful moment of faith.

MOONRISE is a well-done, enjoyable, wholesome movie. Real life country star Granger Smith plays Will and does a great job. The movie keeps moving, and the script is tightly written. Also, the soundtrack is warm and inviting, with a few country songs to pepper the scenes. MOVIEGUIDE® commends MOONRISE for the entire family.