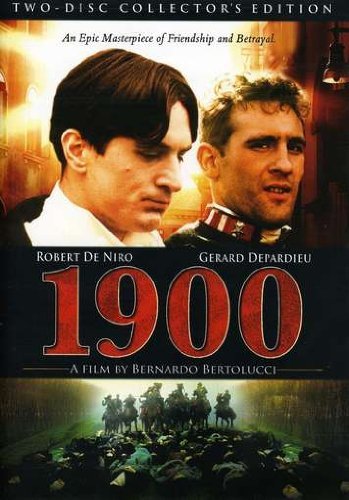 With ponderous polemics about Fascism versus Communism, 1900 is a 4 hour, political X-travaganza packaged as NC-17. Although this re-release of the movie that brought together the talents of three major studios (Paramount, United Artists and Twentieth Century Fox) includes X-rated footage that was cut when 1900 was released in 1976 in the United States, most filmgoers will still find this two-part epic too long, tedious and boring as well as downright repulsive.

This pitchfork-stabbing, noose-hanging, frequently naked, multiple-sex-partner, Marxist diatribe is rated NC-17, a disguise label for this 4 hour X-travaganza, innocuously titled 1900. Although this re-release of the movie that brought together the talents of three major studios (Paramount, United Artists and Twentieth Century Fox) includes X-rated footage that was cut when 1900 was first released in 1976, most filmgoers will still find this two-part epic too long, tedious and boring as well as downright repulsive.

The story takes place around Parma, a medium sized city in north central Italy, which director Bertolucci uses as a microcosm for all of Italy in the 20th Century. It begins in April, 1945, with Italy’s “liberation” from Fascism (although their are those who argue that Italy wanted the Fascists, and it was that party which united the country). While a group of enraged peasants stab pitchforks into a Fascist couple who are trying to flee the country, a young boy takes a wealthy landowner, Alfredo Berlinghieri, captive with a rifle he has just acquired.

As Alfredo informs the boy that his grandfather died in the cow barn where they stand, the movie dissolves back to the day Verdi died January, 1901. This auspicious day also sees the birth of Alfredo Berlinghieri and Olmo Dalco whose lives we follow for the rest of the film. Alfredo Berlinghieri is named after his domineering grandfather (played by Burt Lancaster). Olmo is the illegitimate grandson of Leo Dalco (played by Sterling Hayden), the peasant who manages the Berlinghieri farm. While Grandpa Berlinghieri regrets that he can no longer give orders with the necessary authority, Dalco and the peasants contemplate the promises of socialism.

Becoming friends, the rebellious Olmo dares Alfredo to test his courage by lying down on a railroad track as the train passes over them. With Olmo lying vertically in the middle of the track, arms tightly crossed over his chest, he survives the courage test. Alfredo, on the other hand, refuses to participate until a few years later.

To reassert his manhood, Grandpa Berlinghieri asks a young peasant girl to fondle his genitals. Coyly, she slips her hand into his pants, saying, “but Sir, you know you can’t milk a bull.” This indignation is too much, so Grandpa Berlinghieri hangs himself inside the barn.

Upon his death, his son, Giovanni, falsifies Grandpa’s will. Giovanni props the elder Alfredo up in a bed and imitate his voice, as if he were dictating the will from his deathbed. Young Alfredo, however, rushes into the room and throws the covers off the maimed, blood-scarred corpse.

Later, as the boys play in a loft, comparing genitals at one point, a hailstorm destroys the crops. When Giovanni tells the farmhands they will have to take a cut in pay, they balk. When he asks them if they have ears, one peasant slices off his own ear and hands it to Giovanni.

Seven years later, the farmhands finally strike against the landowners. Leo Dalco dies as the aristocrats comically attempt to work the fields. Enraged by the injustice of this Fascist feudalism, Olmo runs away and joins the Army.

World War I passes. Olmo (played by Gerard Depardieu) returns home and falls in love with a Communist school teacher, Anita Foschi, who has been displaced by the war. He embraces communism and organizes a peasant union.

Thus, 1900 meanders along from one event to another. Fornication punctuates a barren landscape of dialectical events. The landowners repress the peasants; the peasants react; history moves forward. God is absent from 1900, and the church is merely a backdrop for the senseless action.

Eventually, Alfredo inherits the family property and marries a girl named Sandra. Olmo’s wife dies during childbirth. Time passes, at the end of World War II, Olmo, the Communist partisan leader, returns to oversee the trial of Alfredo, who is permitted to stay alive.

With the demise of Communism in Eastern Europe, 1900 makes less sense now than when Bernardo Bertolucci, an avowed Communist, wrote, directed and edited it. (It is interesting to note that Burt Lancaster and Sterling Hayden were both card-carrying Communists. Hayden even left the United States for several years in protest of our system of government.) Devoid of spiritual elements, 1900 is a monotonous ode to dialectical materialism, the organizing system of Marxist thought which advocates contradiction, avows atheism, lauds deceit, and insists on historical inevitability. Even the sexual excess follows Marx’s absurd command to abolish all morality.

Of course, contrary to the trumpeted inevitability of socialism, God intervened in history and proved the Communists and their cousins, the National Socialists, wrong. Paramount Pictures should have taken this into account when they were contemplating the rerelease of this heavy-handed piece of archaic propaganda.

Even secular critics have complained that there is too much pulpit pounding and political theorizing in the script, which works against the grandeur of the theme and flattens any complexity which might have enhanced the story. Furthermore, the horrendous number of objectionable elements (such as numerous obscenities and profanities, extreme graphic violence (pitch-fork and knife stabbing, man’s ear cut off), graphic promiscuity and sexual immorality, female and male total nudity (at least six pornographic scenes), alcohol abuse (naked woman has epileptic seizure after drinking alcohol), humanism and socialism, and, inhumane treatment of animals (a cat is strapped to a board with a thick belt and whacked to a bloody pulp)) degrades the beautiful cinematography and undermines the magnificent musical score. Even excellent acting can’t lift this heavy-handed political tract out of the dustbin of history.

If you would like to protect your children and your community from films like this, please call or write us for information on establishing local laws to stop immoral movies and videos. For a donation of $15, we will send you all the materials you need to clean up your community. Please call or write:
The Christian Film and Television Commission
P.O. Box 190010
Atlanta, GA 31119
(404) 262-7260