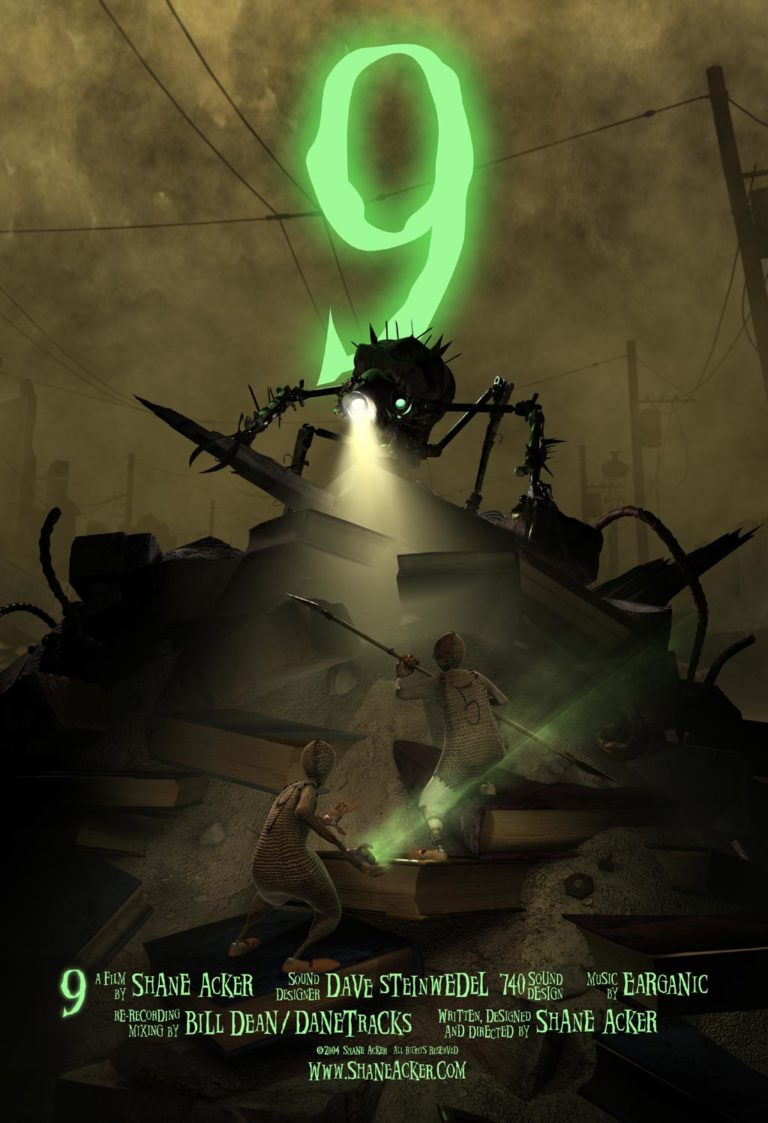 9 is a visually striking, exciting animated science fiction fable. Civilization has been destroyed in a battle between humans and intelligent metallic machines. Before he died, a mysterious scientist built and animated nine small cloth doll creatures. The last one built, #9, is all alone until he discovers the other eight hiding in a large Christian church. While saving one of the eight, 9 inadvertently wakens a large metal brain, which starts creating more metal killing machines. 9 believes that a strange button has a secret that could lead to the revived metal monster’s destruction. He decides that the room where he woke up has the answers.

9 is a thrilling story of courage, sacrifice and redemption. Two reverent shots of Jesus in the stained glass window help give this redemptive story a Christian spin. The movie attacks the religious legalism of the leader of the cloth creatures, however. It also has some references to the soul that include a theologically bizarre concept. It also takes place in a dark world with violent scary metal monsters that will frighten younger children. The good news, however, is there is no foul language or crude content.

(CCC, BBB, FR, VV, M) Very strong Christian, redemptive worldview with very strong moral elements that celebrate courage, sacrifice, redemption, and rescuing others in physical danger, including two positive, reverent shots of Jesus in a stained glass window in a church that is used for sanctuary, a positive reference to an afterlife that also includes the possibility of going up to a heaven where one’s soul can be “free,” and some positive references to the soul that attack soullessness and where a ritual without words occurs that releases several imprisoned souls, but that also include a concept where the human soul can be divided into several parts and movie attacks religious legalism of a leader who wears a hat that looks like something a bishop might wear and talks about enforcing rules for the group’s protection, which could, however, also be interpreted in an antinomian or anti-clerical way; no foul language; strong action violence of fighting evil metal monsters without a soul includes jumping around, swinging on ropes, almost falling from great heights, smashing metal and objects, talking cloth automatons get stabbed and thrown, metal monsters crushed, plus talking cloth automatons are attacked by huge metal monster with lightning energy beams through their eyes which takes their “souls”; no sex; no nudity; no alcohol use; no smoking; and, legalism rebuked, cowardice rebuked, soulless technology rebuked, socialist fascism rebuked, fascist oppression and war mongering rebuked, and a comment at the very end about being free to make the world one’s own.

9 is a visually striking, exciting animated science fiction fable with a positive Christian, redemptive worldview. Some intense action violence and scary metal monsters are too intense for younger children and other sensitive viewers.

The movie begins with an unseen man sewing up a small cloth doll he has created. The man gives the creature eyes while he laments that the foolishness of human beings has destroyed the world. He gives the doll a number 9, which he writes on its back.

Some time later, 9 wakes up to find the man dead on the floor. Silently, he goes out to explore the world, which he finds has been destroyed in some great war. On his way out, 9 picks up a strange wooden button with bizarre writing on triangular sections.

As 9 surveys the wreckage, he runs into #2, a kindly but frail inventor. 2 fixes 9’s voicebox, but a metal creature captures 2 and takes him away to some inactive factory smokestacks in the distance.

9 meets a tribe of seven other creatures led by #1, a domineering war veteran who uses muscle-bound #8 to force the tribe to hide out in a Christian church with a beautiful stained-glass window featuring Jesus. 9 wants to go rescue 2, but 1 orders him not to do it. 9 goes anyway, accompanied by #5, the group’s stalwart and friendly engineer.

9 and his new friend finally reach the inactive factory. They find #2 still alive, but the surviving metal creature attacks them. #7, a brave and self-sufficient warrior, comes to their rescue. Together, they destroy the monster and discover the reason why civilization has been destroyed. It seems that a scientist had created the first real thinking machine, but a dictator took the scientist’s invention and made machines for war and oppression. Eventually, the intelligent machines waged war on the humans and civilization was destroyed, but so were most of the machines.

Regrettably, 9 sees that the strange button he took fits into the wrecked machinery in the dead smokestack factory. His curiosity gets the better of him. He plugs the button into the machinery. This awakens the mechanical monster behind the creation of the machines in the dead factory. After killing 2, the metal monster barely misses killing 9, 5 and 7.

The reawakened metal beast starts creating smaller machines to go after the cloth doll creatures. Everyone’s life is now in real danger. 9 believes, however, that the button has a secret that could lead to the revived metal monster’s destruction. He decides that the room where he woke up has the answers.

9 is a thrilling story of courage, sacrifice and redemption. Two reverent shots of Jesus in the stained glass window help give this redemptive story a Christian spin. The movie attacks, however, the religious legalism of the group’s leader, #1, who often talks about enforcing rules but who eventually performs a sacrificial act at an important point and also shows some rare compassion.

9 takes place in a dark world with scary, violent metal monsters that will frighten younger children or other sensitive viewers. In contrast to these monsters, the animated cloth creatures are gentle by nature. Best of all, perhaps, the movie contains no foul language or crude content.

Creatively speaking, this movie looks like nothing else you’ve ever seen, especially from a major motion picture. The production design is totally unique. It is great to see some strong redemptive content, including overt references to Jesus, attached to such an original, skillful, creative, and inspiring production.