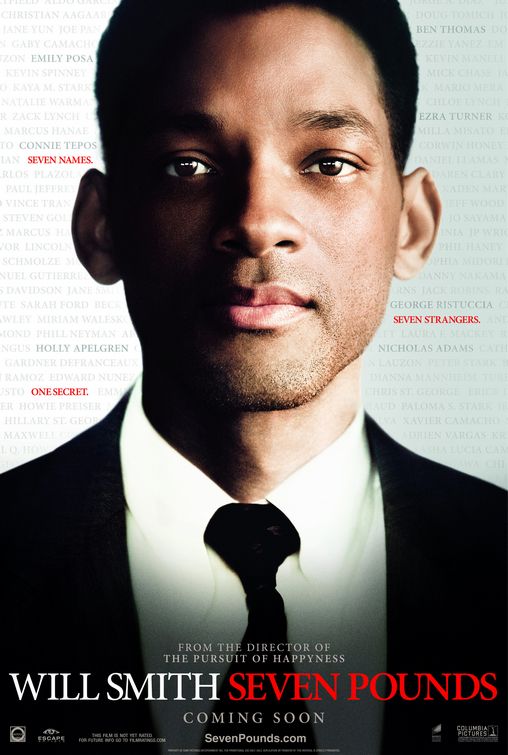 SEVEN POUNDS stars Will Smith as Ben Thomas, an IRS agent suffering terrible remorse because a momentarily lapse while driving accidentally caused the deaths of seven people, including the woman he loves. Ben investigates delinquent taxpayers. He is trying to find out if they are good enough to deserve a break. One of the taxpayers is Emily, a beautiful woman in need of a heart transplant, played by Rosario Dawson. Emily notices Ben’s pain. She tries to get Ben to open up to her, but he resists. Eventually, however, Ben’s defenses break down, and a tenuous romance starts to build.

Though bittersweet, SEVEN POUNDS is a redemptive, inspiring, life affirming story. It has some redemptive moments alluding to Jesus Christ, forgiveness and sacrifice. The mystery surrounding Ben is gripping, but slow to develop. There are also some moral and theological problems. For example, Ben lies, and there is a scene of implied sex. Also, Ben is looking for “good” people to help, whereas Jesus Christ, in his sacrifice on the Cross, died for all mankind, both His friends and His enemies. These problems require caution for media-wise moviegoers, especially older children.

(BB, CC, Pa, LL, VV, S, N, A, MM) Strong moral worldview about the healing power of love with some strong metaphorical Christian, redemptive content that also includes some overt Christian symbols interspersed throughout the story and some poetic metaphors to Christ’s sacrifice, but with a few moral and theological problems that dilute the power and inspiration of the material; 11 obscenities, two strong profanities and two light profanities; strong brief violence with blood such as shots of terrible car accident with a van flipping wildly over several times, surgery scene in hospital, woman faints and falls on hard sidewalk, man angrily wrecks things in office, suicide references, and man angrily shoves man against glass on door; passionate kissing moves to bed and implied fornication occurs; upper male nudity; implied wine at dinner; no smoking; and, strong miscellaneous immorality such as lying, fraudulent representation, implied stealing, and man deliberately berates blind telemarketing person to test him.

SEVEN POUNDS is not as good as Will Smith’s previous collaboration with director Gabriele Muccino, THE PURSUIT OF HAPPYNESS. Even so, it is still a captivating movie with some poetic, inspiring moments.

Smith plays Ben Thomas, an IRS agent still suffering turmoil from a terrible car accident where he unintentionally killed seven people, including his fiancée. The story opens with Ben calling 911, asking the operator to send an ambulance because he’s about to commit suicide. The story appears to flash backward to reveal what brought Ben to this point. It shows Ben investigating several delinquent taxpayers. Ben is trying to find out if the people are good or bad, to justify whether he should give them a break or not. He learns that the first one he investigates, a doctor, is not treating his elderly patients well, so he slams the guy’s head against a door and angrily leaves.

Ben investigates Emily, a beautiful heart patient played by Rosario Dawson, who’s waiting for a transplant. After speaking to her, he decides she deserves an extension on her case, so he gives her one. He can’t keep from seeing her, however, even though he’s still in turmoil over the death of his fiancée.

As Ben helps Emily and tries to help a Hispanic woman who’s being beaten by her boyfriend or husband, his brother desperately tries to find where Ben is hiding. Ben has left his beach house to stay at a motel near Emily. The mystery of Ben’s full intentions builds while he and Emily begin a tenuous romance. Their romance makes it imperative that they find a heart donor for Emily before it’s too late.

The tension and redemptive power of SEVEN POUNDS slowly mounts as the story’s mysteries are eventually revealed. References to Jesus occur in the set design. Some of those occur in the hospital where Emily stays, St. Matthew’s, which is also a reference to Ben’s job as a tax collector. Along the way, there are several twists, which results in a final sacrifice.

There are a couple moral and theological problems with Will Smith’s character, however, that dilute these positive themes. For example, Ben lies in the movie, and, eventually, he and Emily go to bed together. Finally, Smith’s character is looking for “good” people to help, whereas Jesus Christ, in his sacrifice on the Cross, died for all men, both His friends and His enemies.

Given these problems and the movie’s slow pace, plus some foul language, MOVIEGUIDE® recommends three stars for SEVEN POUNDS and a caution for older children.