"Selfless Love and Self Sacrifice" 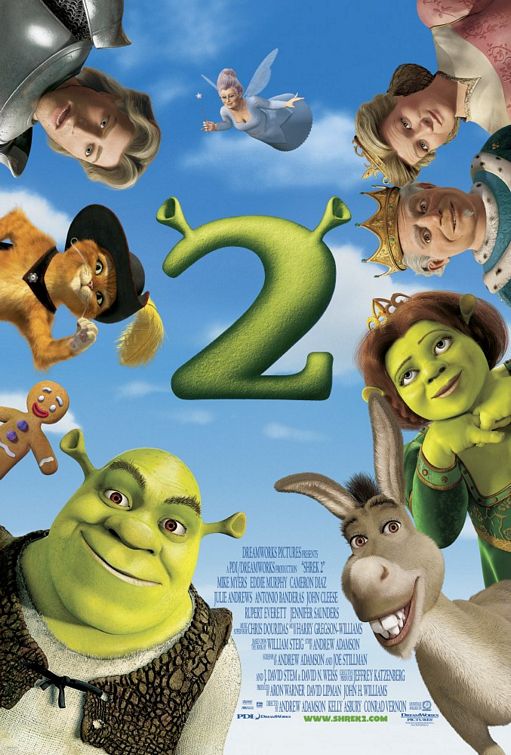 SHREK 2, the first sequel to the 2001 animated Oscar-winning hit, starts off where the first movie left off. Shrek and his ogre-bride, Fiona, have just gotten married. After their honeymoon, Fiona’s parents invite them to their kingdom, the Kingdom of Far, Far Away. The meeting with Fiona’s father, however, doesn’t go so well. Shrek and Fiona have a big argument, and Fiona’s father, in cahoots with the evil Fairy Godmother and her conceited son, plan to separate Shrek and Fiona forever.

SHREK 2 is not as funny as the first movie, even though the animation has made a giant leap forward in creativity and technical prowess. Antonio Banderas as Puss ’n Boots and Eddie Murphy as Donkey are wonderfully entertaining, however. SHREK 2 contains some inappropriate jokes and a politically correct tone, but it also has a light Christian worldview and many biblical, moral messages showing that magical spells and fairy tale enchantments cannot bring real happiness and extolling forgiveness, repentance, self-sacrifice, thinking of others before yourself, selfless love, honor, valor, and the courage to do the right thing. Thus, while the movie is not perfect family fare, it has some positive, entertaining qualities.

(C, Ro, BB, PC, Ho, L, V, S, N, A, D, M) Light Christian worldview where self-sacrifice is valued over self-seeking, with light Romantic elements favoring personal expression over rules and regulations, with some solid moral elements where protagonists reject use of magic and spells, but also with a politically correct tone and a few jokes about cross dressing, e.g., the Ugly Stepsister looks and talks like a man dressed in women’s clothing, the Big Bad Wolf wears Grandma’s night clothes as he does in the fairy tale, and Pinocchio admits to wearing thong underwear; three or four light obscenities, one light profanity, some flatulence jokes, burps, and cat character coughs up a hairball; some slapstick and action violence, such as characters and objects knocked over, Puss In Boots wields a sword, soldiers fight off a creature, and character orders an assassination; references to honeymoon and males wearing female clothing; upper male nudity; alcohol; a brief drug reference; and, lying, deceit, attempted assassination, and blackmail rebuked.

SHREK 2, the first sequel to the 2001 animated Oscar-winning hit, starts off where the first movie left off. Shrek and his ogre-bride, Fiona, have just gotten married. After a short prologue bringing the viewer up to speed, the movie opens with a funny, edited musical sequence showing what Shrek and Fiona do on their honeymoon, like taking a mudbath together at the spa. The happy couple then returns to their home in the swamp, only to find that Donkey, Shrek’s sidekick in the first movie, doesn’t want to leave them alone.

At this point, a troupe of well-garbed men appears. They invite Shrek and Fiona to the Kingdom of Far, Far Away, where Fiona’s parents are King and Queen. At the insistence of Fiona and Donkey, Shrek reluctantly accepts the invitation. The meeting with Fiona’s father, however, doesn’t go so well. Shrek and Fiona have a big argument. This pleases the King, who had a secret deal with Fiona’s Fairy Godmother to let her conceited son, Prince Charming, be the one to break the curse that turned Fiona into an ogre. The King hatches a plot to assassinate Shrek. He hires that famous ogre-killer, Puss In Boots, an arrogant pussycat who thinks he’s Zorro and speaks with a Spanish accent. When this plot fails, the Fairy Godmother hatches another plot to ensure that her son wins Fiona, transforms Fiona back to a human, and becomes the new heir to the kingdom.

SHREK 2 is not as funny or exciting as the first movie, even though the animation has made a giant leap forward in creativity and technical prowess and the last half of the movie becomes much more hilarious. The music also is not quite as richly entertaining, despite a couple nice numbers. Antonio Banderas as Puss In Boots and Eddie Murphy as Donkey are wonderfully entertaining and hilarious, however.

The director of both SHREK 1 and 2 is Adam Adamson, who is reported to be a Christian and so is directing THE LION, THE WITCH & THE WARDROBE. There are some very clear moral and Christian worldview elements in the movie, especially the overriding theme of self-sacrifice and “do unto others as they would do unto you.” SHREK 2 even revolves around the plot device of seeking the Fiona’s father’s blessing.

Even so, the SHREK filmmakers admit that the SHREK franchise is a bit “subversive,” and the first sequel to the smash 2001 hit takes that subversiveness up one notch. SHREK 2 not only pokes fun at the notion of a handsome prince who rescues the beautiful princess, it also pokes fun at society’s notions of external beauty. The movie also contains several inappropriate cross-dressing jokes, which is, of course, a demented, offensive fascination with the abnormal, immoral psychosis of homosexuality. Neither children, nor adults for that matter, should be wondering if Pinocchio wears women’s underwear or not.

On the positive side, SHREK 2 strongly rejects the notion that magic and spells can bring happiness. Eventually, the characters reject the Fairy Godmother and her spells and potions. In fact, smoke from the Fairy Godmother’s potion factory actually pollutes the air in the Kingdom of Far, Far Away.

Thus, despite its politically correct notions of beauty and cross dressing, SHREK 2 has a strong biblical, moral message opposing the use of magical spells and enchantments and a light Christian worldview. If the filmmakers had focused on this message, they not only would have made their movie more morally uplifting, but also more cohesive and more entertaining as well. As it is, they have given their story at least two conflicting premises instead of one unifying premise, which violates a basic principle of dramatic storytelling. Consequently, the resolution of the conflicts in the plot is not as satisfying in the sequel as it was in the original movie.

Finally, although the filmmakers are perhaps right to reject the idealized version of fairy tales preached by Disney Studios for so long, they seem to lack sensitivity about the underlying positive messages of fairy tales. Fairy tales, especially those focusing on a female protagonist like Sleeping Beauty or Cinderella, are not, in reality, some patriarchal, sexist stereotype about waiting for some handsome Prince Charming to sweep you off your feet. It’s not the external looks of Prince Charming that attract the heroine, but the love and security he provides. These things are not bad things to want, they are good. Furthermore, the best fairy tales give children hope that they and/or their parents can defeat the evil monsters or personal demons preventing them from finding happiness. In doing so, they show children how to become a more mature human being. They can even show them how to relate better to their parents, their brothers and sisters, and the other people they encounter in their lives. Of course, if you think about it, a good fairy tale can also show children how to establish a good personal relationship with Jesus Christ. That is a definite possibility that filmmakers should start pursuing.

If there is going to be a SHREK 3 (and there probably will be, according to high-level sources at the studio, DreamWorks, behind SHREK), then the filmmakers should spend more time thinking about the deeper positive messages that the best fairy tales bring to our lives and the lives of our children and grandchildren. Aesthetic iconoclasm and “pushing the envelope” will only take the film artist so far.

The good news, however, is that there are many positive moral and Christian messages in the movie, including forgiveness, repentance, self-sacrifice, thinking of others before yourself, selfless love, honor, valor, and courage to do the right thing. Better yet, although the first half of the movie is slow, the second half has some hilarious moments.