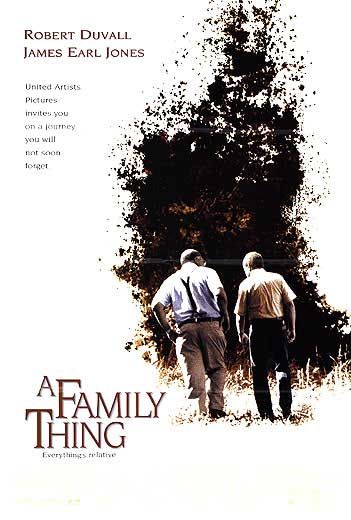 A FAMILY THING is a beautifully acted and simply told story of an older man's search for his identity. A cantankerous, racist man from Arkansas named Earl Pilchard, played by Robert Duvall, finds out he is half black, so he goes to Chicago to find his fully black half- brother, Virgil, played by James Earl Jones. Expertly crafted, the movie demonstrates that in God and God alone, the races can be united.

Earl Pilcher, played by Robert Duvall, is a white racist living in Arkansas. When Earl’s mother dies, she leaves him a note that states that Earl’s mother was really not his own mother. His real mother was a black maid whom his father impregnated, and she died while giving birth. The note ends with a request that Earl go to Chicago to meet his half-brother Virgil, played by James Earl Jones, and accept him as family. Earl goes to Chicago and while there, experiences a clash of cultures. Virgil has nothing but contempt for Earl and his father. Earl tries to leave, but is mugged by black thugs. Alone and frightened, Earl has no choice but to turn to Virgil. In time, with the help of their benevolent Aunt T, Virgil and Earl learn to respect and even love one another.

This is a very simple movie, yet it is emotionally powerful. It focuses down to the personal level of what it means to be united as blacks. The answer is not found in culture or even skin color, but in the love of God. Both of these men express a faith in God and the meaning of their faith, as told by Aunt T., is to love one another. While excellent and moving, care should be taken in viewing this movie, as these men sometimes settle their differences with contemptuous, obscene language.