"A Born Again Story for Adults" 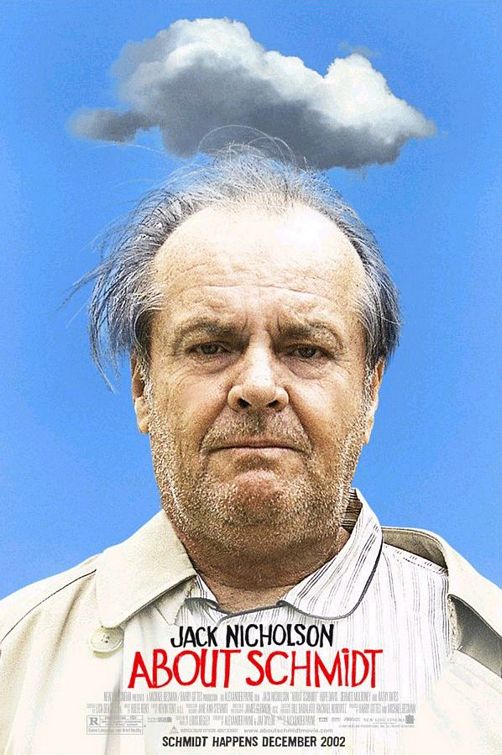 ABOUT SCHMIDT is a Christian movie with a Lutheran flavor. Jack Nicholson plays Warren Schmidt, a man who finds himself unemployed. As he watches television at home, he decides to adopt an orphan in Tanzania named Ndugu for $22 a month. An ad tells him to write Ndugu a letter with his donation, and he proceeds to confess his disdain for his wife and all the many tribulations of his life, including the fact that he gave up his dreams to support his family and they do not care. One day, a family tragedy causes Schmidt to re-examine his life. He becomes a born again Christian and tries to make amends for the wrongs he has done.

ABOUT SCHMIDT is a funny, subtle, on-the-edge, droll, slightly sarcastic, clever, brilliant, jaundiced, poignant, heart-rending, emotive portrait of an elderly man being born again, in a Christian sense. The movie has an edge about it, however, that will keep viewers guessing. Thus, it contains some adult content not suitable for children or teenagers. The Christian elements are clear, but are presented in an off-putting, non-confrontational way that beckons the audience to take Schmidt’s journey with him

(CC, BB, FR, Pa, LL, V, S, NN, A, D, M) Droll but very clear story about a man being born again with many moral messages as well as some Buddhist and New Age artifacts in an aging hippie’s home; 11 obscenities and 13 profanities; wife dies of a stroke, pictures of starving and abused children and woman throws man out of mobile RV; sexual talk, kiss and sexual advances which are rebuked; older woman disrobes and gets into hot tub naked and very explicit and conspicuous nude paintings in her home; alcohol use; man discovers elation from drugs; and, lying, egotism and selfishness rebuked and transformed.

ABOUT SCHMIDT is a Christian movie with a Lutheran flavor. The pastor, Robert Kem, is even a real pastor who plays himself. However, the movie has an edge about it which kept the Cannes Film Festival reviewers guessing until the end, thus effectively planting seeds of redemption. It resembles THE STRAIGHT STORY with more Gospel and more sin.

The story opens with Warren Schmidt, played by the incomparable and eminently watchable Jack Nicholson in one of his greatest roles, in an empty office, staring up as the clock ticks off the seconds to his retirement. That night, Warren is given a retirement party which is painfully insufficient. He leaves the party to go to the bar for a stiff drink.

When he returns to his office in a couple of days to see if he can help the new young executive who took his job (who told him to drop by), he discovers that he is dispensable – all his boxes are stacked up by the garbage disposal. Depressed, he goes home a watches TV for hours on end. As he watches television at home, he sees an infomercial for Child Reach and decides to adopt an orphan in Tanzania named Ndugu for $22 a month. The ad tells him to write Ndugu a letter with his donation, and he does just that. In his letters, he proceeds to confess his disdain for his wife and all the many tribulations of his life, including the fact that he gave up his dreams to support his family…and they do not care.

One day, when he returns from the post office, he finds that his wife has had a stroke and has died. He is mortified and writes Ndugu that he did not mean what he said in his previous letter.

His daughter, Jeannie, played to perfection by Hope Davis, comes to the funeral. He wants her to stay, but she says that he never cared about her before, so why should she care about him now. She is getting married to a real buffoon, Randall, played brilliantly by Dermot Mulroney. Warren objects to the up coming wedding and Jeannie leaves.

After barely surviving alone, and after finding out that his wife had an affair from some love letters in an old shoe box, Warren climbs in his new RV and starts for Denver. But, Jeannie does not want him to come early. So, he decides to do some sightseeing and writes Ndugu about all his adventures.

In the midst of the sightseeing, he stops at a trailer park and mistakes the kindness of a married woman for an advance. When he kisses her, she screams and kicks him out of the trailer. He is so stung by this rejection and the collapse of his life that he climbs on the roof of his trailer at night and asks God to forgive him and his wife to forgive him, prays and crosses himself. A shooting star seems to affirm his answer, and he wakes up the next morning literally saying that he has been born again.

When he goes to Denver, he is a different man. He tries to think of others and do the right thing, but it is hard after such a closed life. The denouement comes on the wedding night and lasts until he returns home and seeks to find out if he has contributed anything to life.

ABOUT SCHMIDT is every man and woman of any age who awakens from an unexamined life to the grace of forgiveness and relationship with others. The arc of the story is tightly wound, keeping the audience off balance until the very end. Humor and pathos are intertwined into a seamless fabric which draws the audience into the story yet keeps them from the obvious answers of our contemporary age. The Christian elements are clear, but presented in an off-putting, non-confrontational way that beckons the audience to take Schmidt’s journey with him. Finally, Schmidt is a real person with complex motivations that slowly reveal themselves in his words, deeds and letters to Ndugu.

Schmidt is not an ordinary sinner although he lives an apparently ordinary life. His sin is focusing so much on doing the right thing that he forgets to love those closest to him. In fact, he does love them by providing for them in his taciturn way, but the filmmakers are not as generous toward Schmidt.

Regrettably, in their attempt to portray the real world, the filmmakers have inserted some profanity, some pictures of nudes in a former hippie’s home, some frank sexual discussion, which embarrasses Schmidt, and an old hippie divorcee, Roberta, played with great conviction by Kathy Bates, who strips naked to join Schmidt in a hot tub, although Schmidt runs from her advances and foul stories. Therefore, ABOUT SCHMIDT is not for children or teenagers. This is regrettable because the movie is so pre-evangelistically Christian that it should have been made to be accessible to all ages, and the direction is so subtle that it was unnecessary to portray the raunchy elements in as broad a fashion – after all, Schmidt rejects all the Roberta’s advances.

Considering the subtlety of the direction by Alexander Payne, Jack Nicholson told MOVIEGUIDE® that he turned in a “silent movie performance.” Alexander Payne told Jack not to play the jokes, which are even funnier because of their subtlety. ABOUT SCHMIDT is the best movie ever made about being “born again.”

Rent or Buy ABOUT SCHMIDT: