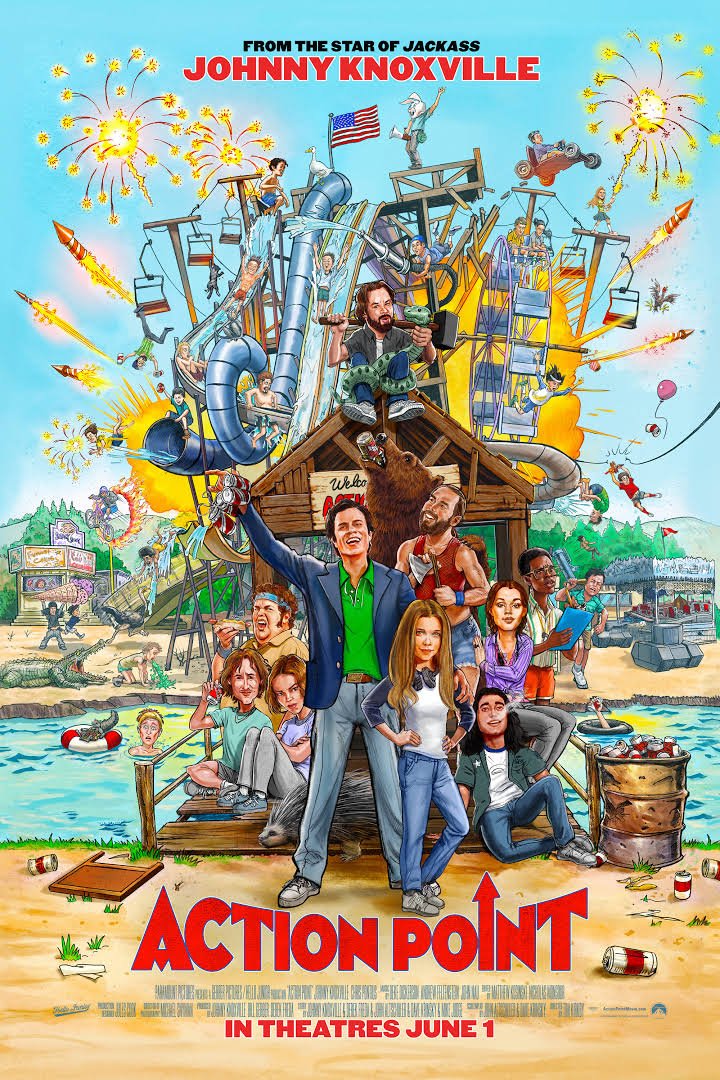 ACTION POINT is a low-brow, obscene, violent comedy about a man trying to save his failing amusement park by advertising it as the area’s dangerous attraction. D.C. owns Action Point, a failing amusement park that’s falling apart. Just as his daughter comes to visit him for the summer, the owner of the competing corporate amusement park tries to drive D.C. and his misfit teenage employees out of business. Rather than cave to pressure, D.C. turns his park’s problems into its selling point. He hypes Action Point as the most extreme thrill-park in the area.

ACTION POINT contains few laughs during the non-stop violence and real-life stunts featured in many Johnny Knoxville movies. However, it features surprisingly affecting performances from the stars, especially in a brief but powerful subplot about Knoxville’s character and his estranged daughter. The movie also has a pro-capitalist plot involving a small business fighting Big Business aligned with Big Government. The rest of the movie, though, contains abundant foul language, offensive obscene and lewd behavior, explicit nudity, and substance abuse. The excessive immoral behavior in ACTION POINT is unacceptable.

(PaPaPa, AbAb, C, B, CapCap, ACAC, Ho, LLL, VVV, SS, NNN, AA, DD, MM):
Dominant Worldview and Other Worldview Content/Elements:
Very strong pagan, immoral, hedonistic worldview where life offers little beyond adrenaline, sex, and instant thrills, but with a solid redemptive, moral but short subplot about the lengths a father will go to show love for his child, plus plot involves a small business fighting Big Business aligned with Big Government and a couple homosexual references.
Foul Language:
At least 87 obscenities (about 25 “f” words), nine strong profanities and two light profanities, plus some crude and scatological language/content, an obscene gesture, and man urinates offscreen twice;
Violence:
Very strong and strong violence includes an endless parade of at least 35 separate instances of comical violence, including people being projected off amusement park rides, people hit in the groin, people fall off buildings, people run over with go-karts, people kicked, people are blasted with a power washer, children are thrown off a slide, children beat an old car with baseball bats, children hit with a pool ball, dangerous animals snap at children, drowning, character choked by a barbell, character has a beard singed off by fire, character catapulted through a barn and trampled by crowds, character menaced by bear, character caught on fire by fireworks, and has a corndog stuck in his right ear, two brief fights, character suffers a large cut;
Sex:
Strong sexual content includes man has simulated oral sex with a squirrel, anchorman fornicates with weathergirl in one lengthy scene, man wearing bear suit shown fornicating with a woman on an amusement park ride, sexual insults, references to a boy learning about sex after seeing his mother naked, and a sympathetic character also makes two disturbing references to liking “schoolgirls”;
Nudity:
Full-frontal male nudity in a centerfold when man looks at a pornographic magazine, rear male nudity, and brief scenes of women in revealing bikinis;
Alcohol Use:
Alcohol use includes alcoholic protagonist often shown drinking Blatz beer and one instance of an underage girl drinking beer;
Smoking and/or Drug Use and Abuse:
Three scenes of tobacco use (cigarettes and cigars), worker mixes drugs with cotton candy, which is sold to teenage park attendees, and soundtrack includes references to cocaine use; and,
Miscellaneous Immorality:
Strong miscellaneous immorality includes a strained father-daughter relationship but resolved in a positive way, a father’s apparent alcoholism is a coping mechanism, thefts, lying, vandalism, insults, and a child sneaks out of house and later runs away from home.

ACTION POINT is a low-brow, excessively obscene, and violent action comedy about a man who tries to save his failing amusement park by advertising it as the area’s dangerous attraction. The movie contains the non-stop, comical violence and real-life stunts that made Johnny Knoxville famous, as well as generally puerile and sophomoric humor, simulated sex and copious obscenity. However, it also features surprisingly affecting performances from the stars, including Knoxville, in a brief but powerful subplot about the relationship between an estranged father and daughter, which goes a long way toward redeeming the otherwise miserable movie.

D.C. (Johnny Knoxville) owns a flagging amusement park, Action Point, that’s literally falling apart in the face of the competition. Just as his daughter (Boogie, played by Eleanor Worthington-Cox) comes to visit him for the summer, the owner of the competing large corporate amusement park (Knoblach, played by Dan Bakkedahl) makes his final push to drive D.C. and his adopted gang of misfit teenage employees out of business. Rather than cave to pressure, D.C. decides to turn his park’s problems into its selling point: He hypes Action Point as the most extreme thrill-park in the area: no speed limits, no rails, no seat belts, just pure adrenaline-pumping spills and excitement. Hilarity follows, or, at least it’s supposed to follow.

The fight against big business and city hall brings everyone together, including D.C. and his estranged daughter. Eventually, Knoblach’s tactics become more desperate and unethical, but more effective. As the noose tightens, will D.C. be able to overcome the pressure arrayed against him and save his park? Will he be able to save himself from his self-destructive habits long enough to rekindle his relationship with his daughter?

ACTION POINT delivers what you would expect from any Johnny Knoxville movie: slapstick comedy built around extreme stunts. Knoxville paid the price in real life for the stunts. “I got hurt more on this movie than any movie I’ve ever done,” he’s reportedly said. He suffered four concussions, broke his wrist, busted his knee, got stitches, got whiplash, lost two teeth, and popped his eye out of its socket.

Watching ACTION POINT will take a similar toll on the viewer. Aside from two scenes (when the crew boycotts itself for publicity and when young children surreally wage war against alligators in “Kids Land”), the laughs are extremely few. The movie features a virtually endless stream of obscenities and profanities in every conceivable variety, sometimes three obscenities and a profanity in a single sentence. A third of the way into the movie, Boogie describes the park by saying, “It’s like it’s one continuous train wreck.” That could serve as a description of the movie.

In the last 15 minutes, which are told in flashback, the movie suddenly reveals real heart and strong dramatic performances depicting the dysfunctional relationship between D.C. and his daughter. Then, without his ever-present can of Blatz beer, Knoxville gives an astoundingly affecting dramatic performance of a heartbroken father watching his character’s daughter’s life slip away. As the daughter, Eleanor Worthington-Cox is perfectly in tune emotionally with every one of her scenes, whether as a conflicted teen, the mischievous troublemaker or the abandoned child longing for her father’s love and attention. This 15-minute subplot is so strong that it nearly redeems this excessively immoral (and not very funny) movie. Perhaps someday Knoxville will get the dramatic cameo role he deserves. In the meantime, Eleanor Worthington-Cox is an actress whose career might be worth following

The soundtrack of 1970s and ’80s rock and country adds more to the movie than expected. In fact, in a movie that needs some heart, it adds a needed touch of realism. Knoxville also deserves points for demonstrating the harms of crony capitalism, when Big Business teams up with Big Government, as well as his scattered shots at PC culture and helicopter parenting.

Sadly, nothing can save a movie that features an obscenity or profanity virtually every sentence, full-frontal male nudity, simulated sex, bestiality, excessive alcoholism (and sometimes illegal drug abuse), and wall-to-wall comic violence.

ACTION POINT deserves some credit for its all-too-brief redemptive subplot and strong performances, but otherwise is excessively immoral and unacceptable.