"It’s a Small World After All" 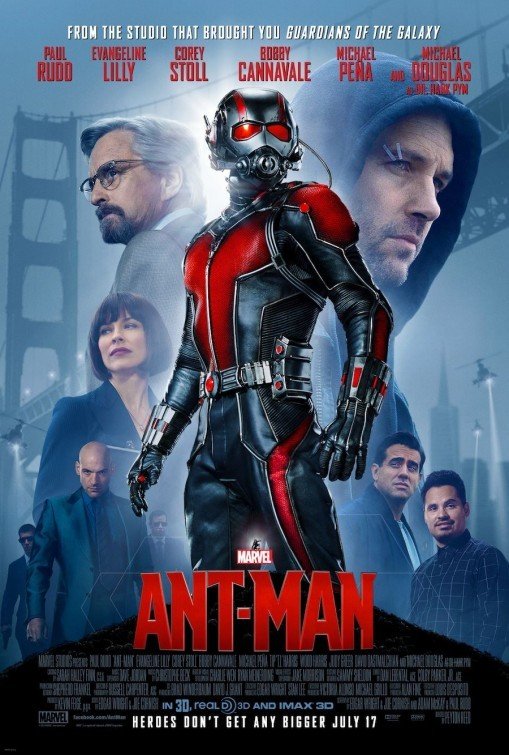 ANT-MAN begins with Scott Lang let out of prison after stealing from a corrupt corporation and distributing the money to defrauded people. A father, he returns home to find his wife has remarried. Determined to prove himself to his daughter and wife, Scott turns back to crime to provide child support. Meanwhile, retired scientist Hank Pym and his daughter oversee new shrinking technology being researched at Pym’s large corporation. Pam and Scott’s paths cross when Scott breaks into Pym’s house to steal from a large safe in the basement. Scott finds a strange suit, which turns him into “Ant-Man.” Eventually, Scott must use the suit to stop the evil Hydra organization from using the shrinking technology to control the world.

ANT-MAN is funny, goofy and exciting, with a touching father-daughter relationship at its center. It has a strong moral, redemptive worldview where the protagonist wants to prove himself in his daughter’s eyes. Mitigating these positive qualities is some uneven character development. ANT-MAN also contains some foul language, strong action violence, light anti-capitalist elements, and brief references to ant evolution. So, MOVIEGUIDE® advises caution.

(BB, CC, H, Acap, Ev, LLL, VV, V, N, M) Strong moral, redemptive worldview extolling family, friendship, redemption, and striving to be good, mitigated by some humanist, anti-capitalist elements, plus a couple references to evolution regarding different species of ants having “evolved” for different tasks (of course, such a difference really reflects the Creator’s “design” rather than some humanist concept of “evolution”); about 28 obscenities (including 4 “s” words and a vulgar obscenity used to compare someone to a “sissy”) and three light exclamatory profanities; moderate violence includes some blood from gunshots, fighting, peril, explosions, house ceiling wrecked, and broken noses; no sexual content; upper male nudity; no alcohol; no smoking or drugs; and, some miscellaneous immorality surrounding the hero at first being a criminal, a thief and a poor father figure.

ANT-MAN is the latest superhero movie from Disney and Marvel that is light-hearted, focusing on comedy instead of story or intense action. ANT-MAN is funny, goofy and exciting, with a strong moral, redemptive worldview, but the character development could be better, and there’s too much foul language, some strong action violence and a couple worldview problems.

The movie begins with a Robin-Hood-esque man named Scott Lang (Paul Rudd) being let out of prison after serving a sentence for stealing from a corrupt corporation and distributing the money to the people the company defrauded. A father, he returns to his old home and family to find his wife has been remarried and is apprehensive to allow Scott back into their lives. Determined to prove himself to his young daughter and wife, Scott turns back to crime to provide child support for his family.

At the same time, retired scientist Hank Pym (Michael Douglass) and his daughter (Evangeline Lilly) oversee new technology being researched by Darren Cross (Corey Stoll) at Pym’s large science and technology corporation. The new technology is the ability to shrink objects and organic material at will in hopes of creating soldiers for the military that can infiltrate enemy lines and such. Pym used to use the technology to fight evil, but he’s become disillusioned and is firmly against seeing his life’s work be used for any violence.

Pym and Scott’s paths cross one night when Scott breaks into a house to steal from a large safe in the home’s basement. Finding nothing but a strange suit, Scott is disappointed with his stolen loot until he puts on the suit, turning him into “Ant-Man.” Eventually, Scott must use the suit to stop the evil Hydra organization from getting hold of the suit and its shrinking technology to control the world. The stakes are raised when his daughter’s life is threatened.

The major themes of ANT-MAN revolve around father-child relationships and loyalty to friends. Hank Pym protects his daughter, yet neglects his scientific protégé, Darren Cross. Scott Lang tries his best to be a role model and father for his daughter. He wants to be the hero his daughter already thinks he is. Thus, Scott becomes the first Marvel hero so far to fight for a child. Not only is this aspect a refreshing one compared to other superhero movies, it also adds significant moral value to the movie and a more touching element that viewers don’t see in other superhero movies. The love between father and child is an entirely different, special kind of love compared to the usual damsel-in-distress theme.

ANT-MAN feels like a small movie compared to other Marvel movies in recent years, no pun intended. Superhero fans are used to the globetrotting escapades of the Avengers, Thor, and Iron Man, but ANT-MAN only seems to have a few settings to explore, such as a house, pipes and a science building.

That said, ANT-MAN deals with concepts will thrill children of all ages. The concept of “ants” is ever-present throughout the movie. Ant-Man can communicate with the ants, through scientific means, organizing them and using them for the power of good. Children will fall in love with the adorable nature of the ants, the interesting variety of ants and how they can be best synergized for a secret mission, and overall the push for the importance of studying science and applying what children are learning in school to real life. Similar to FRANKENSTEIN, scientific progress is encouraged, but there’s constantly a reminder of a line that humans shouldn’t cross.

ANT-MAN has genuinely beautiful special effects. The “shrinking” effect works and adds to the movie’s fast-paced nature of the movie as well as provides many hilarious scenes. Like HONEY, I SHRUNK THE KIDS, it’s fun to see what is normally small and recognizable as huge and now an obstacle for a superhero. The fight scenes are fresh as Ant-Man switches between both small and normal sizes throughout, and it’s fun to think through how he manipulates mass and speed to get the upper hand.

ANT-MAN has a strong moral, redemptive worldview. Ultimately, the hero must redeem himself, especially in the eyes of his daughter. Scott is constantly reminded throughout the movie that he’s nothing but “a criminal.” However, he doesn’t let this stop him from trying to be redeemed in the eyes of others and to “do good” with his talents and gifts. Thus, while, there’s a slight humanist element to Scott’s redemption, there’s still much to learn from his character’s journey.

The movie’s positive worldview is mitigated by some anti-capitalist elements. Lang is portrayed as a Robin Hood character, who steals from the “corporations” and gives to those “who deserve it.” Therefore, there are a couple scenes containing off-hand angry remarks against “big corporations” and giving thing to people who “deserve” them. While this only seems to try and make Lang’s time in prison “okay,” it represents a problem in the movie.

Another big problem is the gratuitous foul language inserted into the movie. There are several really noticeable “s” words and a bunch of other obscenities, including some “d,” “h” and “a” words. These obscenities are unnecessary and cut down on the enjoyment of the movie, especially for media-wise parents.

Ultimately, ANT-MAN is a funny, goofy and exciting movie, but the character development could be better. The foul language, action violence and stealing warrant lots of caution for older children. ANT-MAN is not a family movie.