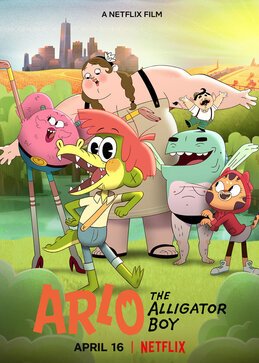 ARLO THE ALLIGATOR BOY is an animated coming-of-age musical comedy on Netflix about a young alligator boy who travels from a swamp in New Orleans to New York City to find his biological father. Along the way, he meets a band of misfits who accompany him to New York before helping him find and confront his father. After being rejected, Arlo falls into a deep depression and contemplates suicide. After being reunited with his friends, Arlo confronts his father, who rejects him again and lets Arlo be taken away by the villains trying to exploit Arlo for money.

ARLO THE ALLIGATOR BOY has funny moments and positive lessons about kindness, friendship and forgiveness. However, the music isn’t very catchy, with hard to hear lyrics, and the story has lots of offensive content. Also, the violence is sometimes too strong. The movie has a risqué joke about two characters making out, lots of homosexual allusions, bestiality, and miscellaneous immorality such as greed, kidnapping and family dysfunction. Media-wise families will want to avoid the politically correct, inappropriate content in AR-LO THE ALLIGATOR BOY.

(RoRoRo, PCPCPC, HoHoHo, HH, B, C, VV, S, N, AA, MM):
Dominant Worldview and Other Worldview Content/Elements:
Very strong Romantic, politically correct worldview promotes an LGBT homosexual agenda with a humanist emphasis on the material world and portrays children as being born good and innocent, then being corrupted by bullying, bad parental examples and society, and these negative elements overshadow the movie’s light moral, redemptive lessons about kindness, friendship and forgiveness
Foul Language:
No profanities or obscenities, but some name-calling, and a few mentions of passing gas
Violence:
Some strong and light violence includes woman smashes a banjo and throws the neck into the wall and spits on it, title character crashes a car, man repeatedly punches a dead alligator (viewer doesn’t yet know it’s dead), and its eye pops out, a man threatens to feed a child to a large dog-like monster, man threatens title character with an electric power cord in order to capture him with a net, a giant woman throws a train car at a man, there’s a fight in a barn, a mob tramples a deer, the villains tie up and interrogate a man, and then a monster drags him away and presumably eats him off screen, a thief falls out of a window, and a character fights the villain’s beast
Sex:
bestiality, a cow and a cat get caught making out in a train car, a shark tells two characters to “get a room,” and a character is either homosexual, transgender or a crossdresser
Nudity:
Title character who’s half alligator and half human takes off all of his clothes and walks through the streets naked (no genitals shown), and a shark only wears underwear
Alcohol Use:
Characters seen drinking what looks like alcoholic beverages at a party on a bus (some characters are presumably underage)
Smoking and/or Drug Use and Abuse:
No smoking or drugs; and,
Miscellaneous Immorality:
Arlo’s adopted mother has been to jail and currently has several warrants out for her arrest, two villains try to kidnap and exploit the alligator boy, bets are placed on fighters, title character’s father falls victim to greed and even abandons his son because he could ruin his ability to get more money, title character’s father seeks to destroy his hometown in an act of revenge against his childhood bullies, title character drives without a license, a tiger girl drives unsupervised with just her permit, shark intentionally scares a child (he’s seeking revenge for his time in an aquarium), a char-acter asks for help from the “Old Town” (implied mafia ties), title character’s father bribes people in attendance at the Met Gala with money, and miscellaneous dysfunctional family elements where title character’s father abandoned him as a child, refuses to accept him as his son when his son confronts him, and lets him get taken away by the villains.

ARLO THE ALLIGATOR BOY is an animated coming-of-age musical comedy on Netflix about a young alligator boy who travels from a swamp in New Orleans to New York City to find his biological father. ARLO THE ALLIGATOR BOY has some funny comical moments and positive lessons about kindness and friendship, but the music is not very good, and the story has an alarmingly high level of offensive content and deliberately promotes an abhorrent homosexual, transgender agenda as well as bestiality.

After being abandoned in a New York City sewer as a baby, a half alligator, half human child named Arlo up floats all the way to a swamp in New Orleans, where he’s adopted by an ex-convict. She raises him as her own until his 15th birthday, when she tells him he has a father in New York (his name was on his hospital wrist band) and encourages him to go find his birth father.

Along the way, Arlo meets a giant woman named Bertie, who rescues him from two people trying to capture him. After falling off the freight train they hopped, Arlo and Bertie meet a group of thieves and scammers at a barn fight, who drive them the rest of the way to New York. Once there, Arlo finds and meets his father, only to have him reject him. As a result, Arlo falls into a deep depression and proceeds to float aimlessly through the sewers of New York contemplating suicide in song.

He washes up on the shore and just so happens to be reunited with his friends, who encourage him to confront his father again. The group crashes the Met Gala that his father is hosting. After confronting him, Arlo’s father allows Arlo to be taken away by the movie’s villains intending to exploit Arlo for money.

What will happen to poor Arlo, the alligator boy?

ARLO THE ALLIGATOR BOY has some positive elements, but it lacks overall quality, both in production and content. A large majority of the movie is sung, but the songs are incredibly hard to understand. Also, they aren’t catchy or entertaining for any age. The movie also has a high amount of offensive content including violence, inappropriate sexual content, bestiality, nudity, animal cruelty, and miscellaneous immorality such as greed, kidnapping, exploitation, felony, and family dysfunction.

ARLO THE ALLIGATOR BOY teaches some positive moral, redemptive messages about kindness, friendship and forgiveness. However, these lessons are undermined by a strong Romantic, humanist elements. It portrays all the characters as being born innocent however they have been damaged and shaped by their exposure to the world’s intolerance, discrimination, bullying, and rejection. The movie also lacks any mention of or belief in a higher power. Although it never denies the existence of one, it focuses solely on the material world.

ARLO THE ALLICATOR BOY aims to influence children with modern non-Christian, unbiblical attitudes. For example, the movie mainly focuses on inclusion, specifically inclusion of the “LBGTQ” community, into society. There’s an obvious LBGTQ character in the story. Also, the movie’s underlying Romantic message of tolerance and inclusion has a poignant, yet subtle focus on people in the LBGTQ community. All of the characters are labeled as “different” and don’t fit into society. Most of them are half-animal and half-human, and one is a giant. All of them have been bullied and influenced into hiding their true identity or, in the case of Arlo, fall into a dark depression filled with suicidal thoughts. However, they all find healing by sharing their true identity or by “coming out” to the world. The characters are praised for this and eventually build a community for those who are different.

While everyone can on some level relate to Arlo and his friends’ struggle for inclusion, worth and belonging, the movie sadly doesn’t teach every child how to best deal with these issues. Its aim is toward one community and as a result it teaches children to embraces themselves, regardless of what others think, and find a community that supports them. While this is good advice, no matter what a child is facing, it is never that easy because other people’s thoughts, both good and bad, will always influence a child on some level. Teaching children how to deal with this rather than just walking away and not caring is a much better use of resources. The mentality of not caring is damaging, can harm relationships with family and friends, and doesn’t teach children how to determine if other people’s criticism is constructive or just plain mean. Also, apathy divides communities and actually causes more division than inclusion as too many people become unwilling to hear other people’s thoughts, opinions and feelings.

Media-wise families will want to avoid the highly questionable politically correct messages and inappropriate content in ARLO THE ALLIGATOR BOY.