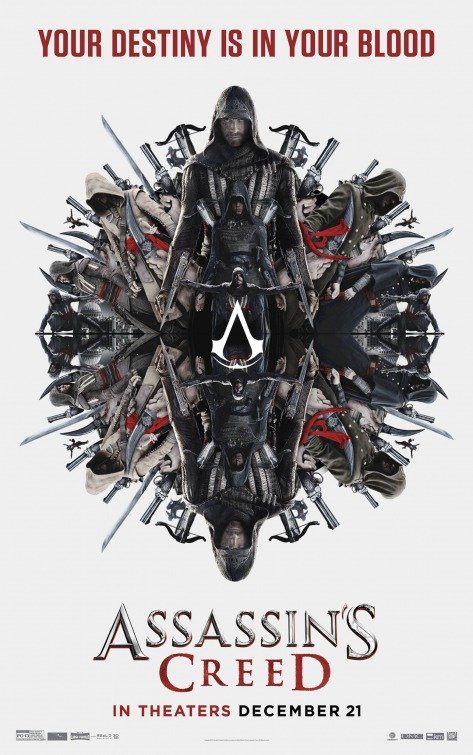 ASSASSIN’S CREED is based on the popular video game. A secret science facility run by a huge corporation kidnaps Callum Lynch. They attach a machine to Callum in order to link him with the memories of a direct ancestor in 1492 Spain. The lead scientist is trying to find the location of an ancient occult artifact called the “Apple of Eden.” What Callum doesn’t know is that the corporation running the facility wants to use the Apple of Eden to control the will of all human beings opposing it.

Despite some impressive action sequences, ASSASSIN’S CREED is convoluted and confusing. It’s hard to tell who are the real heroes. Despite this, some sequences set in 1492 clearly show that the Christian leaders in 15th Century Spain are evil and are being used by the villains. In addition, a Muslim sultan in 1492 is viewed as good. The movie promotes an occult view of history and religion, along with a humanist, nihilistic view of God and morality. MOVIEGUIDE® instructs all moviegoers and video game players to have nothing whatsoever to do with ASSASSIN’S CREED.

(PaPaPa, OOO, HHH, FRFRFR, PCPC, RHRH, AbAbAb, L, VV, N, A, M) Very strong mixed, but somewhat confusing, pagan worldview with occult elements of secret societies, secret knowledge and hidden supernatural power, combined with very strong humanist and nihilistic elements that are philosophically false (part of the creed of the “heroes” says, “Nothing is true; everything is permitted”), with some strong politically correct revisionist history that seems to reflect false leftist thinking where Christians in 15th Century Spain are all evil, but a local Muslim sultan is depicted as a good man whose son has been kidnapped by evil forces manipulating Christians (in reality, the Christians fought against a brutal Muslim regime that had dominated the region for centuries, although, to be sure, some excesses probably occurred among the Christians); one “d” obscenity and one “f” obscenity and Christians kill in the name of God; lots of strong, intense violence includes suicide, fighting, chases, bows and arrows, swords, people fall from great heights, stabbings, and Spanish Inquisition led by a priest tries to burn people at stake, but two escape and free everyone; no sexual content but man says he killed “a pimp,” implying it was justice or self-defense; upper male nudity; alcohol use; no smoking or drugs; and, strong miscellaneous immorality includes moral relativism, character says mankind has tried religion and politics to create a better world so perhaps it’s time to try science, villains are power mad, some nonsensical talk about free will, and secret cults oppose one another but it’s hard to tell the good guys.

ASSASSIN’S CREED, a movie based on the popular video game series, tells the story of a man falsely convicted of murder, who gets involved in an effort to keep an occult artifact out of the hands of an evil secret society trying to use the artifact to control the human race. Despite some impressive action sequences, ASSASSIN’S CREED is confusing and uninvolving, with some murky photography and a silly plot that contains occult mumbo-jumbo mixed with humanist nihilism.

ASSASSIN’S CREED is an action adventure movie set in a pagan fantasy world with occult elements. In reality, the Assassins were a Shia Muslim sect formed around the year 1080 by a Muslim leader out for personal power, including ways to destroy his enemies. The movie throws that history out the window, even though it includes references to Muslims and Christians.

In the story, a secret science facility run by Abstergo Industries captures Callum Lynch after he’s been supposedly executed for killing a man. Sofia, the lead scientist, is working for her father, Dr. Rikken (“Rye-kin”). Sofia uses a strange machine to link Callum with the memories of his direct ancestor, Aguilar, in 1492 Spain. Aguilar is a member of the Assassins, a cult that’s trying to stop the Templars, another cult currently serving the Spanish king and queen, from gaining control of the “Apple of Eden.” The apple is currently under control of the local Muslim Sultan, so the Templars are working with Torquemada, the infamous Christian leader of the Spanish Inquisition, to get the apple.

Sofia believes the sultan gave Callum’s ancestor, Aguilar, the apple, but that Aguilar hid it somewhere in Spain. She and her father hope that by using Callum to link with Aguilar’s memories, they can find the apple. What Callum doesn’t know is that Sofia and her father are working for the Templars, who want to use the apple to eliminate free will and control the human race. Apparently, the apple can manipulate the genetic code of the human race to control any or all human beings.

ASSASSIN’S CREED has some impressive action sequences. However, it opens first with a brief, confusing action sequence set in 1492 Spain where it’s not exactly clear why viewers should root for Aguilar and the Assassins. The next action sequence, where Callum enters the memories of Aguilar as he tries to protect the Apple of Eden, doesn’t clarify matters. The rest of the movie never clears up this confusion, even though it’s clear that Sofia’s father is up to no good, because he wants to give the Templars absolute power over all people. The movie never delves into the elaborate, convoluted details in the original video game series, which seem to reflect an anti-capitalist, nihilistic mindset with an alternate history that sounds like a weird combination of Scientology and socialist conspiracy theories. In both the video game series and the movie, part of the Assassin’s Creed states overtly, “Nothing is true. Everything is permitted.” This is the only part of the Assassin’s Creed quoted in the movie.

Although the movie seems to favor a humanist, nihilistic worldview, it also contains occult elements of secret knowledge, secret societies and hidden supernatural power. There is no god in either the movie or the original video game series. Also, although all the Christians in the movie are bad, the Muslim sultan in 1492 is depicted as good because he’s been keeping the Apple of Eden away from the Christians and the Templars. Muslims also seem to receive favorable treatment in the video game series. Even worse, according to online descriptions of the video games, Jesus is seen as a human leader who merely uses another ancient occult artifact to do miracles. Later, the apostles use the artifact to resurrect Jesus.

All in all, therefore, MOVIEGUIDE® instructs all moviegoers and all video game players to have nothing whatsoever to do with ASSASSIN’S CREED. The creators behind the video game series have spent thousands of hours developing an alternate history and an alternate philosophy for their abhorrent creation. It really is an insane, convoluted concoction of occult, humanist, leftist nonsense.