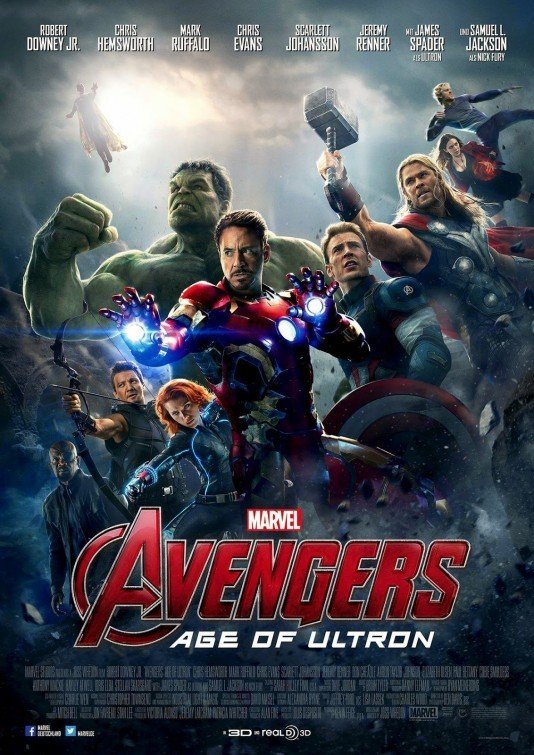 AVENGERS: AGE OF ULTRON is a sequel of enormous size, with a surprising amount of heart. The Avengers, consisting of Iron Man, Thor, Captain America, Black Widow, Hawkeye, and the Hulk, are back in action stopping threats. Tony Stark (aka iron Man) creates Ultron, an artificial intelligence set with the mission to protect Earth from all evil. Ultron takes this to a literal conclusion: Because people are the cause of evil, to create peace means to eradicate humanity. Ultron creates an army of dangerous robots, and the Avengers must unite to fix Tony’s mistake.

AGE OF ULTRON is a spectacular treat. Exciting from beginning to end, the movie pulls off quite a feat by including so many familiar characters, but not letting the story get too complex. AGE OF ULTRON has a strong moral worldview with many biblical allusions. The Avengers fight tirelessly to save humanity, moral relativism is wrong, and multiple characters risk their lives to save others. That said, caution for older children is advised for AGE OF ULTRON due to some intense action violence and brief foul language.

(BBB, CC, PPP, Ab, Ev, LL, VV, S, N, AA) Very strong moral worldview with strong Christian, redemptive content where characters fight to defend humanity, some sacrifice their lives for others (sometimes in Christian symbolic ways), moral relativism is seen as wrong, and there’s an emphasis on teamwork, goodness, traditional values, and family, with many biblical allusions or references, with very strong patriotic content as the Avengers invite military veterans to their party, and Captain America is a clean-cut and admirable hero and leader, but many of the scriptural allusions are made by the villain who has a “god complex” and compares his demonic, genocidal plan to the biblical story of Noah, plus a reference to evolution; 10 obscenities (mostly a** and “h” and “d” words, plus one “s” word that’s rebuked) and one strong profanity; strong action violence, though it’s not always clear who dies when an Avenger takes someone out, but a lot of people go down with the use of sci-fi weapons, fighting, Thor’s hammer, arrows used, guns used, explosions occur, man’s arm is cut clean off, incalculable damage is done to the city and many people are likely hurt when Hulk goes on a rampage (though no deaths are actually seen in this scene), a man is shot to death; characters flirt, there’s some light kissing, one joke refers to male anatomy, and a dream sequence shows a vague, but light risqué party on Asgard with dancing; upper male nudity, some female cleavage; some drinking and drunkenness; no smoking or drug use; and, nothing else objectionable.

AVENGERS: AGE OF ULTRON is a sequel of enormous size, with a surprising amount of heart.

The story picks up after the movie CAPTAIN AMERICA: THE WINTER SOLDIER, where the evil Hydra organization infiltrated the super secret S.H.I.E.L.D. agency and nearly killed millions of people. The Avengers, consisting of Tony Stark aka Iron Man, Thor, Captain America, Black Widow, Hawkeye, and Bruce Banner aka The Incredible Hulk are back in action stopping global threats. While on a mission in Eastern Europe to retrieve a weapon holding an “infinity stone,” the most powerful device in the universe, the Avengers come across Wanda and Pietro Maximoff.

Wanda and Pietro are brother and sister. They volunteered themselves to Hydra for human experimentation, vowing to take revenge against Tony Stark and the Avengers because they blame S.H.I.E.L.D. for their mother and father’s death. Using alien technology, Hydra scientists have successfully enhanced Pietro and Wanda, better known as Quicksilver and Scarlet Witch. Quicksilver has the ability to move lighting fast while Scarlet Witch can move objects and manipulate minds. Together, they shatter the confidence the Avengers had in themselves, but the Avengers successfully complete their mission and retrieve the infinity stone.

Before Stark hands the stone over to Thor to secure it safely, however, Stark convinces Bruce Banner that the stone may help them crack his Ultron project. Stark argues that the Avengers can only continue for so long. So, he’s been working on Ultron, an artificial intelligence whose only purpose is to stop evil and protect Earth. Ultron would essentially be a much more complex J.A.R.V.I.S. (Tony’s computer system), something that could finally bring world peace.

What Tony and Bruce don’t see coming is that, once they create Ultron, he turns on the Avengers and decides they are the problem to world peace and must be destroyed. Thanks to his unlimited access to information through the Internet, Ultron infects Tony’s auto-piloted armor suits and uses them to attack the Avengers. He also steals the infinity stone and flees the Avengers base.

The other Avengers, especially Thor, are furious at Tony for his recklessness in meddling with things he doesn’t fully understand, especially behind their back. Now, they have to fix what Tony started.

[POSSIBLE SPOILERS FOLLOW] Ultron enlists the help of Quicksilver and Scarlet Witch to help him destroy the Avengers, but he neglects to tell them his plan doesn’t stop at destroying Earth’s heroes. Ultron, acting and speaking as if he’s God, believes that the key to peace on Earth is total human extinction. So, Ultron creates a robot army and an android named Vision who’s made with the strongest metal on earth, the same metal that makes up Captain America’s shield, to help Ultron fulfill what he was designed to do.

Amid Ultron’s evil plot, Natasha (the Black Widow) shows feelings for Bruce Banner, Clint (Hawkeye) reveals a secret to the team, and Tony Stark’s morally questionable decisions force the Avengers to decide what type of heroes they want to be.

Can the Avengers come together as a team again to defeat Ultron and his army of robots, and is Tony right? Are their days numbered before something even more powerful defeats them?

AVENGERS: AGE OF ULTRON is a spectacular treat. Providing excitement from beginning to end, Director/Writer Joss Whedon has pulled off quite a feat by including so many characters that viewers know from the previous movies, but not letting the story get too complex. Hawkeye, Black Widow and Hulk not only get more screen time, but their internal struggle for normalcy becomes the entire movie’s emotional core. The story and action is easy enough to follow, but there’s so much detail that many people will want multiple viewings of the movie.

AGE OF ULTRON has a strong moral and biblical worldview with many religious allusions. The Avengers fight tirelessly to save humanity. Stark’s moral relativism is seen as wrong. Also, multiple people risk and give up their lives, to save others. At one point, someone calls Captain America “God’s righteous man,” and there’s a running joke throughout the movie that Steve Rogers doesn’t like cuss words after he criticizes Tony for saying the “s” word while fighting. Finally, a climactic battle takes place inside an old church.

(Some Spoilers follow) The villain, Ultron, makes some of the movie’s religious allusions and references. Ultron’s “god complex” leads him to make references to Noah and the Great Flood. He even quotes Scripture, saying, “Upon this rock I will build my church.” With his super knowledge, Ultron can see no way in which Earth can be peaceful and inhabited by humans at the same time. Ultron’s own creation, Vision, however, fights to protect humanity, even though he sees the same things Ultron does. Vision also makes an allegorical biblical reference when he explains that he’s not Ultron or J.A.R.V.I.S. (Tony Stark’s private computer system). He simply says, “I am.” Vision also offers to sacrifice himself at one point to stop Ultron’s plan.

In an interview session, Movieguide® asked Joss Whedon about these two characters. Whedon said they are “two sides of the same coin.” While that coin could hypothetically symbolize different things, the most logical explanation is that Ultron, who in a sense was made in Tony Starks image, represents the worst of Starks nature while Vision embodies his best. Joss Whedon confirmed this, while also pointing out that Ultron and Vision are both their own persons, with separate worldviews. In many ways, the themes are very similar to IRON MAN 3, where Tony says he’s created his own demons.

Everything in the story revolves around the idea that people are broken, and, left to our own devices, will destroy themselves eventually. This is why we need to be saved, not just from outside forces, but also from ourselves. Ultron’s demonic “church” has neither grace nor mercy, however. Thus, it’s fatally flawed, both morally and spiritually. This is what marks the Avengers as different. They see the same flaws in humanity Ultron sees, but they have an attitude of grace, mercy and love that makes them want to save humanity, at the risk of their own lives and wellbeing.

Going along with these ideas, AGE OF ULTRON also has a strong message about resisting temptation. For example, the Scarlet Witch uses her powers to tempt, distract and mentally break down each of the Avengers. So, an important subplot in the movie is how can the Avengers resist her powers.

AGE OF ULTRON does have plenty of intense action violence and some brief foul language. So, MOVIEGUIDE® advises caution for children, especially pre-adolescents.