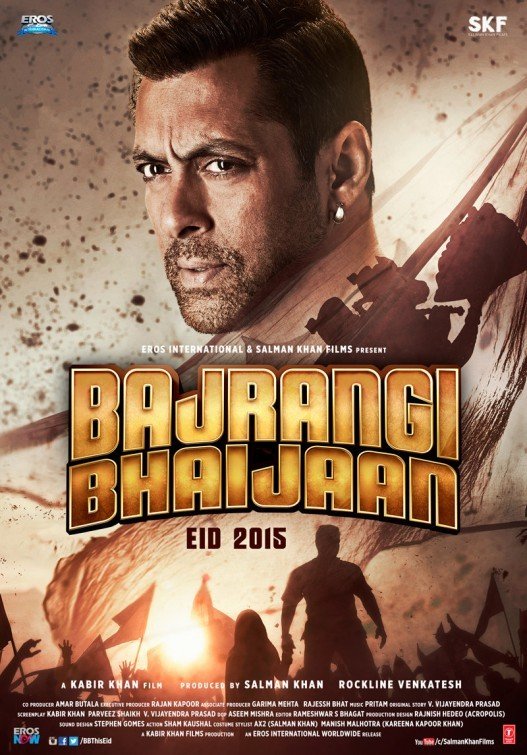 BAJRANGI BHAIJAAN is an Indian movie about a young mute girl from Pakistan, Shahida, who travels to Delhi in India with her mother in hopes of seeing a specialist to help her regain her voice. Shahida sneaks off the train while her mother sleeps, and the train leaves her behind. An engaged Indian man thinks she’s Indian and shelters her. When he discovers she’s Pakistani, he sends the girl back at once. Unable to get her a passport, the man insists on crossing the border with her to help her return. The journey is treacherous because they have to evade the authorities while trying to find Shahida’s home.

BAJRANGI BHAIJAAN is well written, heartwarming and endearing. Like other Indian movies, it has overly dramatic fight scenes and random, lavish dance numbers that seem out of place. Yet, by the same token, they’re curiously entertaining. The primary con-cerns are the frequent references to Hinduism and, to a lesser extent, Islam. However, the movie’s central message is to love your enemies. BAJRANGI BHAIJAAN also extols honesty, integrity and kindness. Consequently, the worldview is mixed.

(PaPaPa, FRFRFR, BB, Ro, O, L, VV, S, N, M) Very strong mixed pagan worldview featuring Eastern religions includes several Hindu gods are worshipped and mentioned throughout the movie, Hindu idols are shown in multiple scenes, a girl wears a necklace featuring a Hindu god, Hindu temples and Muslim mosques are used in multiple scenes showing people worshipping/praying, man is shown bowing to a monkey in sev-eral scenes, Allah is mentioned, but the false religious ideas and behavior are combined with strong moral elements stressing the importance of honesty and integrity, love for others instead of hate, caring for strangers is central to the story, plus Romantic elements stressing looking past national borders and loving neighboring enemies instead of hating them for their cultural differences and brief mention of black magic in a song; two ob-scenities and one profanity used, circumcision is briefly mentioned; a father slaps his son’s hand with a ruler for getting a math problem wrong, montage of father slapping son’s face for failing his exams ten times; a Pakistani embassy is overrun in India and shows windows being broken and people being hit with clubs, several men are thrown against furniture or through windows during a fight, man fights with police to escape, po-lice slap a man while interrogating him, a man is tortured and seen being hit by a wooden staff; a brothel is shown with some couples in rooms together, but no nudity or sex is shown, a young girl was mistakenly sold to the manager of a brothel, and it’s implied that she will work there; natural upper male nudity with wrestlers shown in just their shorts, upper male nudity shown in a dance sequence where men are not wearing shirts, a man is seen in a brothel wearing only boxers; no alcohol; no smoking or drugs; and, a girl steals a bracelet but is caught, a man steals a bike to get away from police but is caught, and Indians and Pakistanis talk about their hate for one another in multiple scenes.

BAJRANGI BHAIJAAN is a popular Bollywood movie from India about the conflict between the peoples of India and Pakistan.

Six-year-old Shahida lives on a rural sheep-herding farm in the picturesque mountains of Pakistan. She accidentally falls over a cliff one day and is unable to call for help because of being born mute. Though she is found uninjured, her parents believe it’s best if her voice is fixed. To do this, she must travel to Delhi in India to see a specialist.

Shahida and her mother travel to the foreign country by train, but the train stops in the middle of nowhere due to a maintenance problem that must be repaired. The girl sees a lamb stuck in a hole outside of her window and sneaks off to rescue it while her mother sleeps. The train starts up again and leaves Shahida behind, igniting a frantic search by her mother when she’s discovered missing.

Shahida boards a cargo train that takes her to Delhi. There she spots a man, Pawan, and decides to follow him around until he figures out she’s lost. He takes her back to his home, shared by his fiancee’s family. None of them know Shahida’s origins, but they be-lieve her to be Indian. Together, Pawan and his fiancee, Rasika, care for the girl as if she were their own, and name her Munni.

However, Shahida (Munni) begins showing behaviors that run counter to Indian culture, such as eating meat. They do their best to try to figure out where she is from based on these behaviors, consistently getting it wrong. It isn’t until Shahida shows her support for the Pakistani cricket team during a game on television that they discover her true ethnic-ity. This angers Rasika’s father who harbors hatred for the Pakistanis due to the military and cultural conflicts India and Pakistan have shared over the years. He orders Pawan to send her back to Pakistan at once.

Pawan takes Shahida to the Pakistan embassy the next day, but without proof she’s Paki-stani, they refuse to help him. The embassy is simultaneously overrun by protesting Indi-ans, forcing Pawan to find an alternative. He tries to get a passport for the girl to no avail, and decides that the only way to get her home is for him to take her himself. The first ob-stacle is getting her across the border, which he insists on doing legally even though they must sneak in using a tunnel.

After multiple attempts, the border guards finally grant permission for them to enter without a passport, but they are arrested by police when they are caught without any legal documents. The police immediately accuse Pawan of being an Indian spy, further com-plicating matters. A local reporter catches wind of the story and closely follows Pawan as he escapes from the police and sets out on his journey to locate Shahida’s parents. The journey is a treacherous one as Pawan has to avoid the authorities while traveling the ex-panse of the country to find the one small village that Shahida calls home.

Though much in this movie will feel foreign for American audiences, it does capture many of the universal truths common to all humanity. This endears it as a wonderfully told story, centralized around a message of love. The humor throughout is also universal. Although some of the laughs are related to Indian customs, they are easily understood by most English-speaking viewers. What may be most unfamiliar is the Bollywood style, which can come off as quite cheesy compared to Hollywood standards. Overly dramatic fight scenes and random moments of bursting into lavish dance numbers seem strange and out of place. Yet, by the same token, they’re curiously entertaining.

The quality of the cinematography is a mixed bag. Many shots are gorgeous and featured the beautiful natural landscape of Pakistan, while others rivaled those of a student film. The average moviegoer is not likely to let this deter from the experience, though.

The primary concern regarding BAJRANGI BHAIJAAN are the frequent references to Hinduism and, to a lesser extent, Islam. The main characters are Hindu and their religious beliefs or practices play a major role in the story. Images of Hindu gods are seen often, worshipped often, and mentioned often. Also, one of the main characters is Muslim, and there are several scenes in mosques showing Muslims praying. However, the movie’s central message is to love your enemies. BAJRANGI BHAIJAAN also extols honesty, integrity and kindness. Consequently, the worldview is mixed.