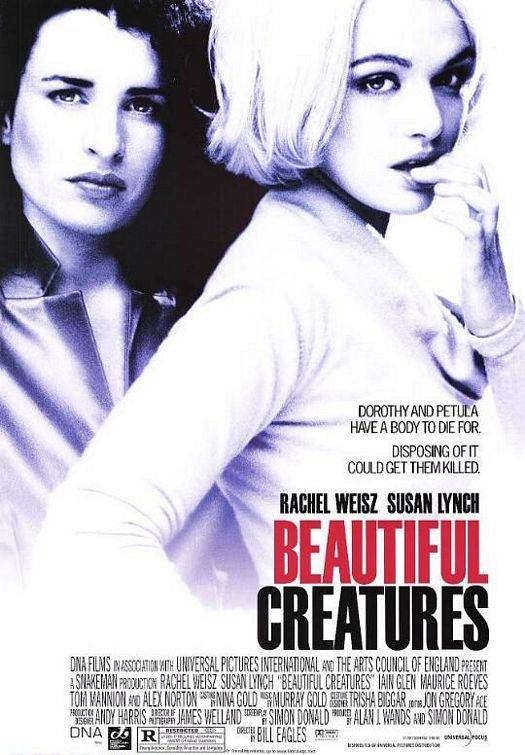 BEAUTIFUL CREATURES is a thriller set in Glasgow, Scotland. Dorothy has just had a terrible fight with her scummy boyfriend, Tony. She decides to leave town with her faithful dog when she sees a young woman, Petula, being beaten by her boyfriend. Springing to Petula’s defense, Dorothy accidentally kills the boyfriend. The women hatch a dangerous scheme to convince the boyfriend’s menacing, rich brother that he has been kidnapped. The corrupt detective working the case has a plan of his own, however. When Dorothy’s boyfriend catches wind of the scheme, it leads to brutal violence.

The violence, mayhem and strong foul language are just part of what makes BEAUTIFUL CREATURES an abhorrent tale. All the male characters are about as evil as they can be, and the feminist heroines must resort to extortion and violence to get away from them. Also, although it’s never explicit, there seems to be a homosexual lesbian undercurrent to Dorothy and Petula’s relationship. This movie also contains some crude, distasteful sexual references and brief partial nudity. Regrettably, some of the jaded members of the screening audience seemed to find the despicable behaviors depicted in BEAUTIFUL CREATURES incredible hilarious.

BEAUTIFUL CREATURES is a romantic fantasy about a girl with magical supernatural powers who shakes up the life of a teenage boy in South Carolina. The movie has a convoluted plot and a strong pagan worldview with many occult themes.

Ethan Wate wakes up every night from a dream with a girl running in a Civil War field. Being from the tiny town of Gatlin, South Carolina, Ethan is used to being involved in Civil War reenactments. What he doesn’t know is that there is a new family in town with a curse on it that started during the Civil War, the Duchannes family. All Ethan thinks about is Lena Duchannes, the newest citizen of Gatlin, who has just moved in with her uncle, Macon. He realizes Lena’s the girl in his dreams, and he wants to spend every moment with her.

The townspeople aren’t so accepting of Lena, calling her a witch. Lena admits to Ethan she has supernatural powers, but she is called a Caster who is able to change the weather and project poetry onto the walls. Many of the girls in the town pray over Lena, and the Christians are shown in a very negative way.

Lena decides to allow Ethan into her life even though she isn’t supposed to fall in love with a mortal. On Lena’s 16th birthday, she is going either going to be claimed by the dark side or the light. She will still be a Caster, but she will either do harm to mortals or live among them. According to a curse cast upon the females in her family, she will be claimed by the dark side. This curse was cast during the Civil War when one female Caster fell in love with a mortal. When he died, she cast a spell that was never supposed to be spoken. Therefore, a curse was put on her family. However, Lena’s uncle Macon believes Lena will be able to fight the curse and choose her own destiny.

BEAUTIFUL CREATURES is a convoluted story that takes place in the modern day but has flashbacks to the Civil War. These flashbacks add to the convoluted plotline, but easily could have been removed entirely. The movie’s dialogue is on the nose, where the characters state what’s going on during the scene. This may be the fault of the screenwriter trying to add most of the content from the book.

BEAUTIFUL CREATURES has very blatant occult themes. Also, the Christians in town are primarily seen in a very negative way, though there is one positive scene where the pastor preaches about sacrifice. One character talks to the dead but also goes to church every Sunday. Another character says humans make up God, and many other scenes depict the church and Christians as the villain.

Based on a series of magic novels called the Caster Chronicles, BEAUTIFUL CREATURES has very strong occult content that’s abhorrent. As Moses proclaims in Deuteronomy 18:10-12, “There shall not be found among you any one that makes his son or his daughter to pass through the fire, or that uses divination, or an observer of times, or an enchanter, or a witch, or a charmer, or a consulter with familiar spirits, or a wizard, or a necromancer. For all that do these things are an abomination unto the Lord….”