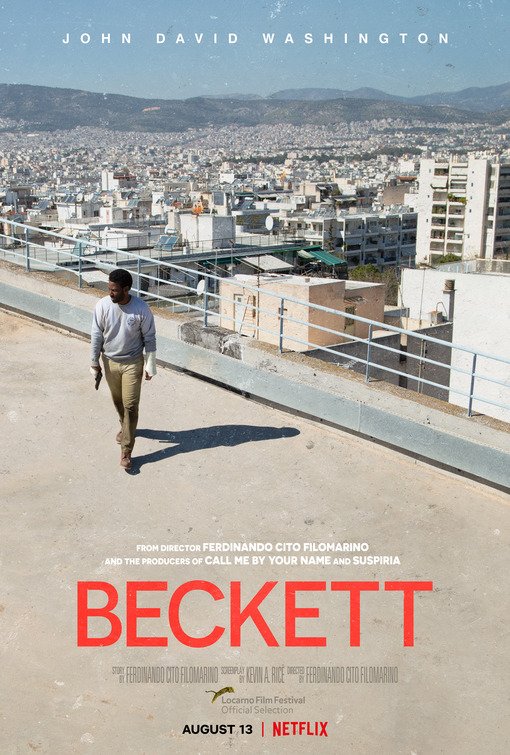 BECKETT is an intense thriller on Netflix about an American tourist named Beckett whose girlfriend is killed in a car crash after he falls asleep at the wheel while vacationing in Greece. Beckett finds himself relentlessly pursued by corrupt police officers and a ruthless double agent without knowing why. Convinced that all Greek police are corrupt, Beckett also learns of a young boy, the son of an unpopular Greek leader, who’s allegedly been kidnapped by a rebel group. Beckett realizes the boy is the same person he saw immediately after his crash. He believes his only chance for safety is to make it to the American embassy at all costs.

BECKETT is an exciting thriller. It plays like a modern-day NORTH BY NORTHWEST, although with a darker, more serious tone. BECKETT starts slow as it sets up the close romantic relationship between Beckett and his girlfriend. Once he’s running for his life, however, the movie picks up the pace and enjoyment level. BECKETT has some very strong, intense violence, strong foul language and brief lewd content. So, MOVIEGUIDE® advises extreme caution.

(Pa, B, AP, LLL, VVV, S, NN, A, MM):
Dominant Worldview and Other Worldview Content/Elements:
Light amoral, mixed pagan worldview with some moral elements when hero risks his life to rescue a kidnapped boy, plus some mention of America doing evil in the world as part of its foreign policies
Foul Language:
About 23 obscenities (including 12 to 14 “f” words), two Jesus profanities, two GD profanities, three other profanities
Violence:
A serious car crash flips the car over and over, and a woman passenger is found to have been thrown out of the car and died with a big pool of blood coming from her head, a man is chased and shot at repeatedly in both rural and urban settings, numerous brutal fight scene include stabbing and slicing with a knife, and a man beating another man to death with a metal pipe; a man tasers another man hard on his chest over his heart, man jumps from high ledges twice, landing hard on land and another time smashing into the roof of a car
Sex:
A man and woman are shown in bed, first romantically holding each other while either about to have sex or right after having sex, man starts to passionately kiss girlfriend and move his hands down her sheet-covered buttocks and uncovered legs
Nudity:
Man is seen shirtless in bed, the woman is mostly implied naked under sheets, though her breast is seen from the side for a split-second with no nipple showing
Alcohol Use:
Some alcohol use
Smoking and/or Drug Use and Abuse:
No smoking and a distraught man briefly considers overdosing on prescription pills, but doesn’t;
Miscellaneous Immorality:
Strong miscellaneous immorality such as characters are duplicitous and backstab each other throughout the movie, an American agent proves to be particularly malevolent, and two key Greek police officers are shown to be corrupt and deadly.

BECKETT is a Netflix thriller about an American whose girlfriend is killed in a car crash after he falls asleep at the wheel while vacationing in Greece, and then finds himself being relentlessly pursued by corrupt police officers and a ruthless double agent without knowing why. BECKETT is an exciting, propulsive thriller that plays like a modern-day NORTH BY NORTHWEST, but with a darker, more serious tone as well as some very strong, intense violence, strong foul language and brief lewd content.

Beckett (John David Washington) and his girlfriend, April (Alicia Vikander), are vacationing in Greece when he falls asleep at the wheel on a rural backroad and their car flies off the road, crashing into a house. April is thrown from the car and instantly killed, but Beckett is alive and upside-down in the wreckage when he sees a boy appear at the hole in the wall the car made in the house, with a woman whisking the boy away.

Devastated by his loss, especially after having to relay the news of April’s death to her family, Beckett goes back to the scene of the accident. While sitting in the house depressed and considering suicide, a woman appears at the house and starts shooting at him. As he flees frantically, a police car shows up and a male officer starts shooting at him as well.

Beckett dives off a cliff to stay alive and thus begins a breakneck odyssey that rarely relents in its fast pace. Convinced that all Greek police are corrupt, Beckett also learns of a young boy, the son of an unpopular Greek leader, who’s been kidnapped, allegedly by a rebel group.

Beckett realizes the boy is the same person he saw immediately after his crash. He believes his only chance for safety is to make it to the American embassy at all costs.

BECKETT starts slow, taking about 15 minutes before its first burst of action as it sets up the closely romantic relationship of Beckett and Anna. Once the car crash happens, however, and he’s on the run for his life, the movie picks up the pace and enjoyment level greatly.

While it’s surprisingly not spoken of, the fact that Beckett is black is a brilliant casting choice because he stands out completely in the nearly all-white streets of Greece. Already handicapped by a lack of Greek speaking skills, the fact that he literally has no way to hide himself in a crowd creates repeated moments of great tension.

The action scenes in BECKETT are top-notch, though the hand to hand combat includes a knife or two in a couple of sequences and things do get bloody. The movie avoids foul language for most of its running time, until a corrupt American agent explodes in a profane tirade during his final battle with Beckett. BECKETT also has a brief bedroom scene with a brief flash of partial nudity. So, MOVIEGUIDE® advises extreme caution for older teenagers and adults.