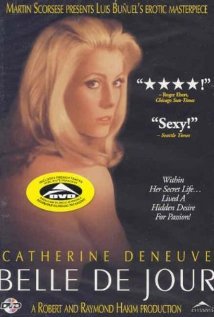 In this re-release of Luis Bunuel's BELLE DE JOUR, Catherine Deneuve is cast as Severine, the beautiful but misguided wife of a wealthy surgeon, who dreams of sexual fantasies where she is forced to surrender her will. The many scenes of half nudity and sexual deviations and the themes of prostitution and adultery overwhelm the brilliance of Bunuel's artistry.

(Ro, Ho, L, V, SSS, NNN, A, M) Sexual romanticism where the heroine lives out her sexual fantasies for self-fulfillment; a hint of lesbianism; 4 vulgarities; 4 scenes of direct violence where two thugs attack man in elevator, man whips out gun in a bar & shoot-outs; rampant prostitution, adultery & promiscuity; 18 sexual situations including fantasies of sexual bondage where women & men are whipped & shot, & images of sexual deviations in which a man makes out with a make-believe corpse; 11 scenes of varying stages of half-nudity of both sexes; drinking & smoking are seen as lifestyle vogue; and themes of revenge and blackmail.

BELLE DE JOUR is a re-release of the widely-acclaimed French film first shown in 1967 by director Luis Bunuel. The film has been touted as a classic. Catherine Deneuve plays Severine, the wife of a wealthy surgeon Pierre, who is devoted to her despite her coldness to him. However, patient Pierre is unaware that Severine holds quiet fantasies of sexual bondage. Severine lives out her fantasies when she is drawn to a local brothel and offers her services every afternoon. Tentative at first, Severine eventually panders to the demands of her customers, subjugating her will to that of others. When fantasy and reality finally come to their unexpected confrontation, Severine is faced with the ultimate surrender — that of life’s own force and power.

Bunuel’s artistic eye makes for a brilliantly executed film. Bunuel glosses his film with chic and sophistication, but this belies the true nature of the film’s story — one of sexual degradation and humiliation. While he successfully manipulates the idea of self-will and its surrender, Bunuel nevertheless projects perversion at its worst — claiming self-indulgence as the platform for the pursuit of demeaning acts of sex and betrayal. At the end of all the brilliance, BELLE DE JOUR is as much without a soul and conscience as its pathetic heroine Severine.

Writer: Luis Bunuel & Jean-Claude Carriere BASED ON THE NOVEL BY: Joseph Kessel