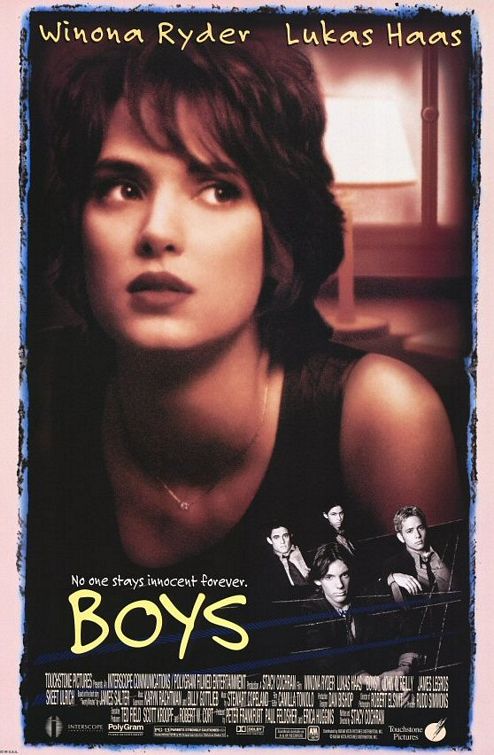 BOYS is an adolescent fantasy about a malcontent adolescent who falls in love with a beautiful twenty-something woman, played by Lukas Haas and Winona Ryder respectively. Boring, poorly written, awkwardly acted, and dramatically disjointed, it doesn't have much sex, but it does have a lot of foul mouthed brats.

Lukas Haas plays a malcontent prep school senior, John Baker, Jr., who falls for the mysterious older woman, Patty Vare, played by Winona Ryder, in BOYS. One day, a young school mate takes John to a semi-conscious woman who was thrown off of her horse. Rather than taking her to the hospital, John takes to his dorm room. Every lusty boy pines to take a look at her when word gets out. A smitten John keeps the doors shut and his attention on Patty Vare. Soon, she begins to reveal to him her story involving a stolen car and a missing baseball player. The two run off to a county fair, but Patty is brought into the police for questioning, and John is put back in school. At a most anti-climatic climax, Patty and John pull a “THE GRADUATE” stunt, momentarily reuniting the rebels to the shock of everyone else.

BOYS, like its namesake, is an immature, indecisive movie. The movie tries to make a lot of statements about growing up, but all those themes are lost in the awkward acting, shallow dialogue and unclear dramatic pacing. Though not including much sex, it does have a lot of foul mouthed brats. Because it tries to be a little mysterious and arty, BOYS will probably not be shown to as many boys as the filmmakers wish. A boring, contrived off-beat picture, these BOYS will take a spanking at the box office.