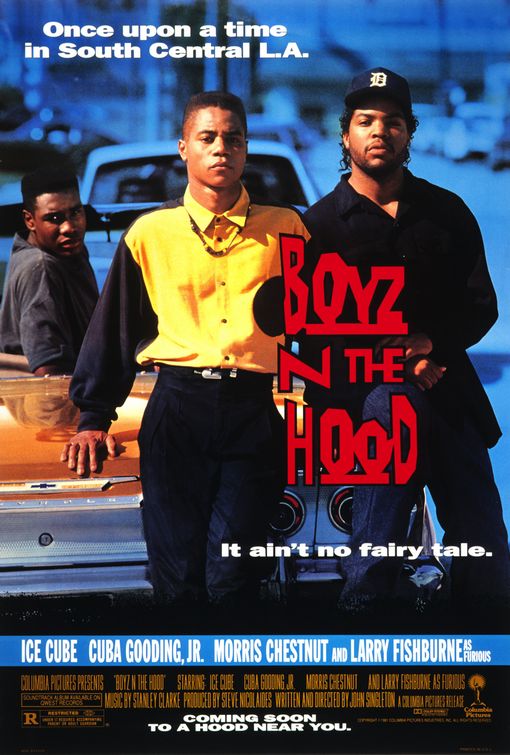 John Singleton's $6 million feature-film directing and writing debut, BOYZ N THE HOOD, is a black coming-of-age tale set in a Los Angeles ghetto where a 17-year old manages to live surrounded by gangs, drugs and violence without succumbing to it. Well-produced, but marred by the confused nod toward socialism, the excessive profanities and obscenities, nudity and fornication, and violence.

Columbia Pictures brings yet another 1991 black film to the screen with BOYZ N THE HOOD. This time, the storyline follows three friends coming of age in embattled South-Central Los Angeles where writer-director John Singleton grew up. A documentary-like chronicle, the film deals with the choices the “boyz”, Tre Styles, Ricky Baker and Doughboy (Ricky’s brother), must make in a poor, crime-infested, drug-dealing, inner-city neighborhood.

As film opens, his mother drops ten-year old Tre off to live with his father because “he needs a man to help him become a man.” That night, a burglar breaks into their home. Tre’s father shoots at him, but he escapes. The police arrive an hour later. They are in no rush since the burglary involved only “niggers” (their words) and after speaking derogatorily to Furious Styles, Tre’s dad, they leave abruptly.

Soon, Tre takes up with old friends across the street, the Baker boys, who live with their single mom. Ricky, the more ambitious of the two, likes football, while hefty Doughboy tends toward getting into scrapes.

Tre’s dad, for the most part, gives young Tre some good advice: he tells him he can do something with his life and also tells him to avoid sex unless he is ready to be a father himself. This father-son relationship turns out to be a fairly healthy one as Tre’s dad tells him he loves him, takes the time to enjoy activities like fishing with Tre, and, with a business of his own, provides a good role-model for his son.

Seven years later, the three boys are still on Crenshaw Street in L.A., but now Ricky and Tre need to take the college S.A.T. tests to get into college. Ricky’s football prowess will qualify him for a scholarship (depending on the test scores). However, Ricky, at 17, also must care for a wife and a baby, which would make college pretty difficult. Doughboy, on the other hand, mostly sits on the front porch with his buddies, drinks from an ever-present bottle, and, periodically, gets involved in fights and other street action.

However, when Ricky and Tre go to the store for groceries, other blacks in a car ambush Ricky (who is on foot) and gun him down. Tre is heart-broken, and he and Doughboy carry the body back to Ricky’s house.

Doughboy seeks to avenge his brother’s death, finds the killers, and, in turn, kills them. Two weeks later, Doughboy is murdered.

The down-side of this film is: Tre’s father advising him to use condoms; Tre and his girl friend fornicating; and, the filthy gutter talk with excessive profanity and obscenity. Despite these objections, the pathos and power of the film cannot be denied.

A fairly well-produced and well-acted film, BOYZ N THE HOOD tries to present an accurate portrayal of blacks growing up in the inner city. Tre was fortunate to have some type of role model to pattern himself after, but the other boys, and so many like them, lack a positive male influence. Of course, our society as a whole reflects such deprivation. Often as not, as with the Baker boys, this inadequate male influence leads the boys to seek their identity in peer groups and, ultimately, gets them into trouble. As the Apostle Paul states in I Corinthians 15:33: “Do not be deceived: ‘Evil company corrupts good habits.'”

Unfortunately, director Singleton tries to make a few socialist economic points, but they don’t wash in these days when the Eastern Europeans are trying to cast off the evils of socialism and even the Soviets have removed the word “Socialist” from the name of their empire (which is no longer the U.S.S.R., but now the U.S.R. for United Soviet Republics). With a cockeyed preoccupation with Washington, D.C., Singleton says he wanted to show “how the Reagan administration played a large part in destroying my neighborhood.” Since we can assume that Mr. Reagan didn’t come into his neighborhood armed to the teeth with knives and guns solely to destroy it, we must conclude that Singleton thought that Washington was best equipped to supervise and fund the maintenance of his neighborhood. Perhaps this film will give him enough money to travel to Washington to see how poorly the government performs in its own back yard. Evidently, Mr. Singleton thinks that Washington has a secret source of funds which they withheld from his neighborhood. He needs a course in classical economics to help him not only accurately portray the plight of neighborhoods like his, but also help his neighbors understand how they can make a difference and start on the road to prosperity out of the socialist quagmire.