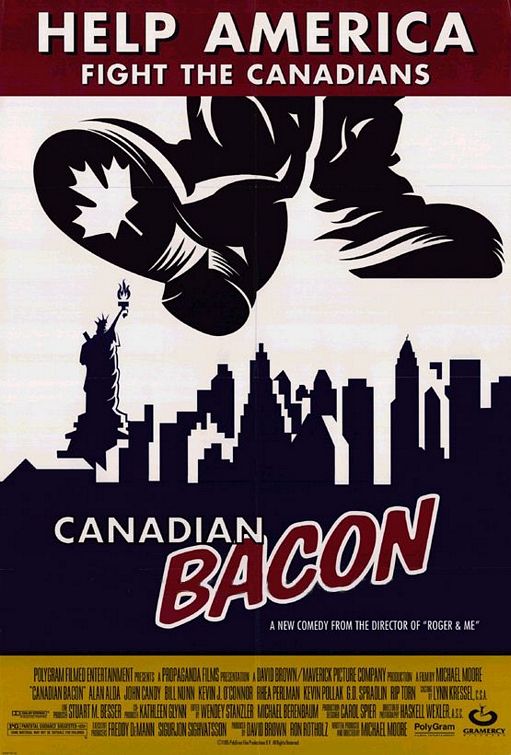 CANADIAN BACON, Michael Moore's irreverent satire about politically manipulated tensions between the United States and Canada, is marred by offensive language and a pagan worldview espousing anarchy. Too much of the humor is in bad taste to call it entertaining or commend it to discerning audiences.

(NA, LLL, VV, A, Ac, M) Pagan worldview demonstrated in its mockery of moral responsibility & humorous treatment of anarchy and nihilism; 28 obscenities, 24 profanities & 4 vulgarities; sexual innuendo; a man is shot to death because he twisted his ankle, attempted suicide, rioting, man held at gunpoint, & man falls to death after being knocked off a balcony; alcohol use; anti-Communist statements but from a despicable character; thefts; vulgar graffiti; racism & racial stereotyping; and, littering, political opportunism & extortion

It is the nature of satire to hold vices, institutions, and follies of humankind up to ridicule and sarcasm. The challenge is to know when enough is enough. In CANADIAN BACON, Michael Moore crosses more boundaries than just the U.S./Canadian border. His tale about the President of the United States purposely inciting war with Canada so that he can gain in the polls teeters over the line which separates entertainment and crudity. Sheriff Bud Boomer of Niagara Falls (played by John Candy in 1993) incites a riot at a Canadian hockey game when he comments that Canada makes bad beer. The President and his fellow conspirators launch a campaign through the media to incite hatred and draw the two countries into conflict. Complication arise when Sheriff Boomer’s deputy Honey gets captured during a midnight raid across the river to throw trash on Canadian land.

Production quality is passable on this low budget film. Regrettably, the language used is offensive, and the pagan worldview espousing anarchy and mockery of institutions, authority, morality, and humanity will prove too insulting for most viewers. Government officials are portrayed as buffoons. Police violence is applauded. Americans are regarded as mindless sheep, and the stereotyping of other races and nationalities is consistent throughout movie.