"A Battle Between Law and Liberty" 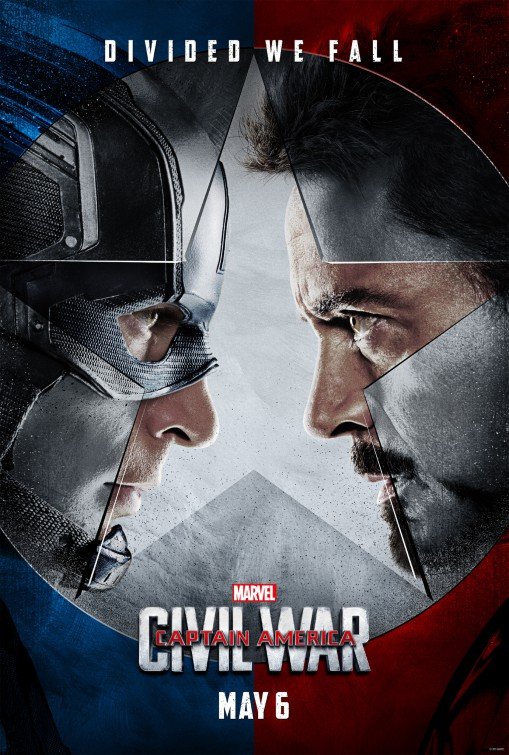 CAPTAIN AMERICA: CIVIL WAR is the third Captain America movie. It has Steve Rogers, aka Captain America, resisting Iron Man creator Tony Stark and the U.S. government because they want to place the Avengers team under the United Nations. When Steve’s childhood friend Bucky is framed for a terrorist attack, Steve must become an outlaw to protect his friend and fight for liberty. The Avengers are split between law versus liberty. This leads to an epic fight that has both sides wondering why they’re fighting.

CAPTAIN AMERICA: CIVIL WAR is superbly crafted and enthralling, with many funny moments to lighten the mood. Captain America is by far Marvel’s most morally centered character. The ethical conundrum the filmmakers have crafted put Captain America’s convictions to the ultimate test. Thankfully, the ending makes a strong statement against vengeance. It also promotes freedom, taking responsibility and fighting against injustice. Sadly, CAPTAIN AMERICA: CIVIL WAR continues the growing trend of excessive foul language in Marvel movies. Also, the intensity of the violence is too much for children, so MOVIEGUIDE® advises strong caution for CIVIL WAR.

(BBB, CC, PPP, LLL, VV) Very strong moral, biblical worldview about fighting against injustice, and not being overcome by vengeance, a funeral takes place in a cathedral, and a character vaguely discusses an afterlife in which his deceased father believed, plus very strong patriotic values promoting both law and liberty, with an emphasis on freedom and self-government; 20 obscenities (including a few “s” words) and eight profanities (including two GDs); strong action violence with many gun battles, hand-to-hand combat throughout, not many wounds or deaths are seen as a result, though much is implied, two heroes beat each other to the pulp in the climax, someone is nearly choked to death, a dead body is found in a bathtub, car crashes and explosions from bombs with implied casualties; no sexual content, but there is a passionate kiss; no nudity; no alcohol use; no drugs use; and, no other objectionable content.

CAPTAIN AMERICA: CIVIL WAR is the third Captain America movie in the Marvel Cinematic Universe; it is by far the biggest in scope and scale. With stunning action sequences, CIVIL WAR takes the series of movies to new heights as the Avengers team is pitted against one another in a high-stakes plot that unveils how easy it is to give up liberty and freedom because of fear and vengeance.

CIVIL WAR finds Steve Rogers aka Captain America leading the team of Avengers on continued missions against terrorists. With Sam Wilson, the Falcon, and Natasha Romaoff, the Black Widow, by his side, Steve is training the newest member, Wanda Maximoff (from AVENGERS: AGE OF ULTRON), to control her powers. When civilians are killed while on a mission in Nigeria due to Wanda’s inexperience, Steve’s team faces scrutiny from the government for their unsanctioned, unaccountable actions.

The Secretary of State, in an attempt to keep the Avengers going, submits a proposal that’s been approved by over 100 countries that would put the Avengers under the authority of the United Nations. Feeling extremely guilty from the accidental deaths caused by their heroics, Tony Stark aka Iron Man no longer wants to work unchecked. So, Tony, along with War Machine and Vision, agree the Avengers must be held accountable. Steve Rogers disagrees, however. He notes that government agencies have agendas, and agendas tend to change. He wants freedom to choose to do the right thing.

When the United Nations meets to pass the resolution in Vienna, a bombing kills the President of Wakanda, who was the resolution’s main sponsor. The bombing looks as if it was done by Steve’s childhood friend Bucky Barnes, the Winter Soldier. Steve knows that Bucky, who was a brainwashed soldier, once controlled by Hydra, would never do this now that he’s free from Hydra’s control. So, Steve sets out to protect his friend from the government. One of Bucky’s pursuers includes the President of Wakanda’s son, Prince T’Challa, who also dawns a costume as the deadly Black Panther and is set to avenge his father’s death by killing Bucky.

The stakes escalate and the conflict grows deeper and more serious. This leads to an all out battle between Captain America and Iron Man along with the superheroes that side with them.

CAPTAIN AMERICA: CIVIL WAR is very intense and incredibly entertaining. The action sequences start off a little rough, overusing the “shakey-cam” technique made famous in the BOURNE series. However, the movie quickly becomes more watchable.

Where CIVIL WAR shines is the cohesive plot. Steve’s fight over the United Nations resolution and over Bucky are connected thematically. Steve’s fear that of giving the government control over the Avengers effectively mirrors with Bucky’s storyline as a former solider, who was used by the Hydra cabal infiltrating government, stripped of his free will and controlled to do morally reprehensible things. With solid character motivations behind Steve, Tony and a mysterious villain, CIVIL WAR’s structure and pacing are remarkable.

That said, even though the story is expertly crafted, many viewers will have a difficult time watching two heroes they admire fight each other so brutally. CIVIL WAR is by far the most solemn and culturally introspective movie Marvel has made. Amazingly, though, considering how serious the plot is, the filmmakers brilliantly insert hilarious moments that will have viewers roaring with laughter. The inclusion of Ant-Man and Marvel’s new Spider-Man, played by Tom Holland, adds levity to the whole affair. Without that comic relief, the movie probably would drag.

Captain America is by far Marvel’s most morally centered character. With the ethical conundrum the filmmakers have crafted in CIVIL WAR, the convictions Steve Rogers holds are put to the ultimate test. The disagreement between Tony and Steve comes down to the tension between law and liberty. As Christians, both are gifts from God and both are incredibly important. What viewers see in CIVIL WAR and in reality is that our human nature tends to ruin both law and liberty. Government oversteps its God-ordained limits and regulates things it shouldn’t, and civilians take advantage of their liberty and trade moral personal responsibility for lawless hedonism. Both Steve Rogers and Tony Stark want liberty and law. They just disagree on which one is more important. When the plot becomes personal for these characters, disagreement turns to anger, which turns to resentment, and even revenge.

Ultimately, most viewers probably will side with Captain America, the more conservative side of liberty and the interplay within self-government and responsibility, but the ethical questions at play nonetheless make CIVIL WAR more ambiguous than desired. Regardless, the themes are shockingly relevant to today in the middle of an election cycle in the United States that has the country dangerously divided.

Thankfully, the ending makes a very strong statement against being consumed by vengeance. It also promotes freedom, taking responsibility and fighting against injustice. Sadly, CAPTAIN AMERICA: CIVIL WAR continues the excessive foul language infecting more recent Marvel movies, and the violence and intensity will be too much for children, so a strong caution is advised. Otherwise, many mature teenagers and adults will find CIVIL WAR to be riveting entertainment.

1. In what ways is CIVIL WAR similar to our culture and society now?

3. What characters become overcome by vengeance, and what does the Bible say about vengeance?