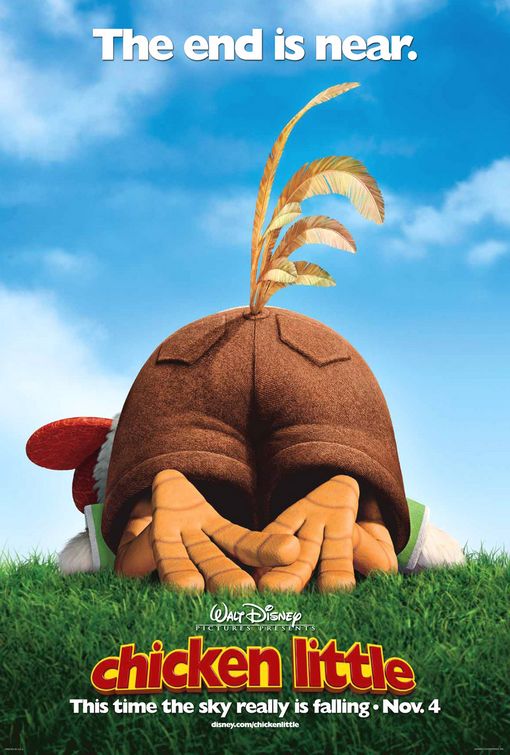 CHICKEN LITTLE, Disney’s first fully computer-animated movie, is a big family entertainment. After Chicken Little causes widespread panic, when he apparently mistakes a falling acorn for a piece of the sky, the young chicken is determined to restore his reputation and finally gain respect from his father, Buck Cluck. Just as things are starting to go his way, another piece of the sky lands on his head. Chicken Little and his band of misfit friends, Abby Mallard (aka Ugly Duckling), Runt of the Litter and Fish Out of Water, attempt to save the world from an alien invasion without sending the town into a whole new panic.

CHICKEN LITTLE is a wild and wooly take on the children’s fable. It combines the frantic pace of the Loony Toon Cartoons starring Bugs Bunny and Daffy Duck with the heart and quirky humor of Pixar’s FINDING NEMO. The movie also has a very strong, family friendly moral worldview with Christian overtones. It encourages parents and children to communicate freely. Even better, it teaches the Christian message that the truest, deepest, most powerful love is not something you can earn. It is something that is freely given.

(BBB, C, V, N, M) Very strong moral worldview with Christian overtones teaching that you shouldn’t have to earn a father’s love; no foul language, but characters talk about pee in one scene and characters say “Snap!” a few times when they are startled or amazed; lots of cartoon violence in some scenes such as animals panic, vehicle crashes into water tower, giant ball smashes through buildings and other objects, animals run from giant ball, gym class holds dodgeball game and ball hits many people, acorn hits chicken on head, aliens shoot laser at animals, laser makes animals disappear but they later turn out to be okay, sliding collision at home plate during baseball game, and animals get scared; no sex scenes, two animals kiss, and girl fox acts like a tomboy and is star of baseball team, then starts wearing dresses after a traumatic incident and becomes girlfriend to boy pig; no human nudity and boy chicken loses his pants, leaving him in his underwear; no alcohol, no smoking, no drugs; and, boy has trouble gaining approval, respect and trust from his father, who is clearly disappointed in his son.

CHICKEN LITTLE, Disney’s first fully computer animated movie, is big family entertainment. It is a wild and wooly take on the children’s fable about the little chicken who thought the sky is falling.

The movie opens with Chicken Little ringing the alarm bell at his school and yelling, “The sky is falling!” The whole town goes into a total panic. Vehicles crash into each other and crash into other objects. The water tower is destroyed and a huge giant ball structure comes crashing and tumbling through the local movie house, while the audience is watching Indiana Jones run from another giant ball in RAIDERS OF THE LOST ARK.

Chicken Little shows his father and the town mayor where a piece of the sky fell on his head. As he’s talking, however, an acorn from the tree above falls on his head, and everyone goes home dejected. Chicken Little’s dad is the most dejected and disappointed of all. They all think that Chicken Little panicked over nothing. “Your kid went and scared us all to death,”

Chicken Little decides to join the high school baseball team and emulate his father’s own sports heroics as the star of the team years ago. He is so small, however, that the coach relegates him to the bench. Eventually, Chicken Little gets his chance in the big game and comes through with flying colors. His newfound stardom results in a reconciliation with his father, but the two males are still afraid to really open up to each other about their feelings, as Chicken Little’s friend Abby Mallard (aka Ugly Duckling) suggests.

Chicken Little is too happy to be discouraged by this, however. Unfortunately, his happiness is short-lived when another piece of the sky falls on his head. The object turns out to be a piece of an alien spaceship that has the ability to camouflage itself. Chicken Little and his friends Abby, Fish Out of Water and Runt of the Litter investigate the spaceship, which leads to an alien invasion that endangers the whole town.

CHICKEN LITTLE is an energetic, funny, screwball take on the famous children’s fable. It deftly combines the frantic pace of the Loony Toon Cartoons starring Bugs Bunny and Daffy Duck with the heart and quirky humor of Pixar’s FINDING NEMO. It contains a lot of slapstick humor mixed in with vibrant, very funny characters. Disney has assembled the talent of a host of comic stars to animate the voices of many characters, including the legendary Don Knotts. Rated G, the movie has something for everyone, young and old alike.

CHICKEN LITTLE has a very strong, family friendly moral worldview with Christian overtones. It encourages parents and children to communicate freely with one another. Even better, the biggest moral truth it teaches is that children shouldn’t have to earn their father’s love by being star players or even doing well in school. This echoes the Christian message that we are saved by God’s love and grace through Jesus Christ, not by any good works we may do. We can’t earn God’s love; it is always there for His children.

“For God so loved the world that he gave his only begotten Son so that whoever believes in Him shall not perish, but have eternal life” – John 3:16.