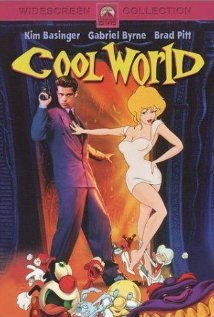 In COOL WORLD, Frank and Jack fall into a cartoonist's two-dimensional fantasy land. Attempting to crossover into the real world, a harlot seduces Jack in pornographic fashion, ripping off her clothes to fornicate with him. From start to finish, COOL WORLD is a sexual fantasy that is off-limits for children and anyone who wants to keep his mind pure before God.

In COOL WORLD, Frank and Jack fall into a cartoonist’s two-dimensional fantasy land a la the flop of the century, BRENDA STARR. It all begins in 1940’s Las Vegas, as detective Frank Harris is pulled into COOL WORLD by “Spike of Power,” an invention of Doc Whiskers. Back to the present, cartoonist Jack Deebs draws his visions of COOL WORLD into a popular comic book. When his sketch of Holli Would (Kim Basinger) comes to life, he is transported into COOL WORLD. Meanwhile, Holli wants to crossover to the “real world” by having sex with a humanoid. After seducing and bedding Jack, she becomes real. With Frank in pursuit, Holli crosses over to search for the Spike in hopes of remaining real.

From start to finish, COOL WORLD is a sexual fantasy that is off-limits for anyone who wants to keep his mind pure before God. Ralph Bakshi, noted for his X-rated cartoon FRITZ THE CAT, mixes live action with animation, but falls short on entertainment value. While the animation is okay, the content is pornographically explicit and occultic. Also, the interaction with live actors doesn’t always mesh and the storyline is somewhat confusing. Distracting animated figures pop up on screen for no reason.