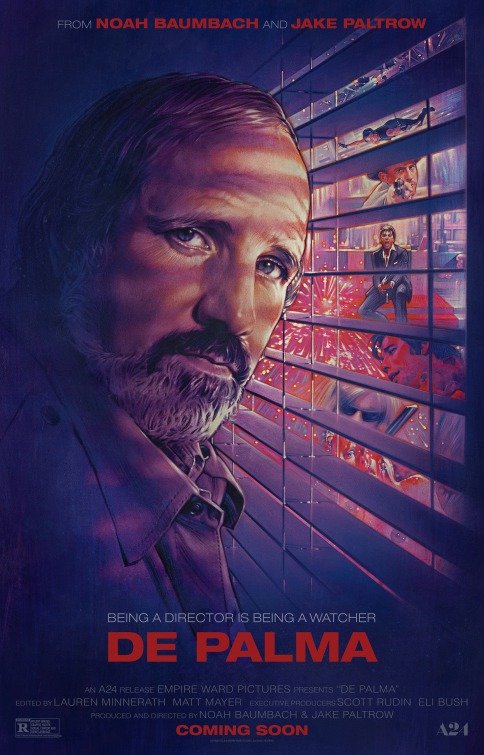 This documentary is told from De Palma’s point of view. However, it’s a pretty accurate assessment of the kinds of movies he makes, including their predominant themes and techniques. As such, DE PALMA is a fascinating look at what makes a Brian De Palma movie tick. The biggest problem is that it includes an abhorrent defense of De Palma’s use of extreme violence and sexuality in many of his movies, as well as a defense of De Palma’s rather left-wing politics.

(RoRo, AcapAcap, PC, APAP, Ab, L, VVV, SS, NNN, M) Strong Romantic, liberal worldview that sees artistic expression mostly as a personal matter regardless of any standards of truth, beauty or goodness (though it’s hard to sustain such a self-refuting, irrational position), with some anti-capitalist attacks on the American film industry and some politically correct antiwar sentiments that are also Anti-American because it implicitly makes American soldiers out to be the bad guys, plus brief reference to Christian fanatic mother in a movie version of Stephen King’s CARRIE novel; five or six obscenities (including one or two “f” words), two strong profanities and one light profanity; some extreme violent images from R-rated movies includes woman’s throat slit by razor, woman’s body punctured with drill, bloody body, helicopter crashes and blade comes close to man’s neck, man’s face splattered with some blood when a gangster takes a chainsaw to his friend off screen, huge wave crashes into pier, girl covered in pig’s blood and uses her telekinetic powers to kill other people, girl with telekinetic powers impales her Christian fanatic mother with kitchen utensils in crucifix position; strong but brief references to sexuality; full frontal female nudity in locker room scene from CARRIE movie, an image of rear female nudity, and images of upper female nudity; no alcohol; no smoking or drugs; and, some possible self-righteous moral relativism and examples of obsession.

DE PALMA is a documentary about controversial filmmaker Brian De Palma, who made his reputation doing ultraviolent Hitchcockian horror movies. It consists of Brian discussing his career and influences, intermixed with clips and photos from his life and career, including clips of his movies and other movies. DE PALMA is a fascinating, accurate representation of Brian’s film career, but it does include an abhorrent defense of depicting ultraviolence in movies and of Brian’s rather left-wing politics.

The movie opens with De Palma describing how he was so enamored with Hitchcock’s classic movie, VERTIGO, when he saw it in the theater as a teenager in the late 1950s. VERTIGO is actually a tragedy about obsession and identity, so its tone and subject matter reflect some of De Palma’s top themes in his own movies. (De Palma’s movies are also influenced by Hitchcock’s thrillers REAR WINDOW and PSYCHO.)

From there, De Palma discusses his experiences as a film student at Sarah Lawrence College and Columbia University. During this time, he also met a young actor named Robert De Niro, who starred in De Palma’s two early political movies about the Vietnam War in 1968 and 1970, GREETINGS and HI, MOM! De Palma would return to that war in 1989’s CASUALTIES OF WAR, a story starring Michael J. Fox and Sean Penn about the rape and murder of a Vietnamese civilian woman.

In the mid 1970s, De Palma started having some success making controversial, ultraviolent psychological horror thrillers like SISTERS, CARRIE and DRESSED TO KILL. After his 1983 gangster movie SCARFACE became a cult favorite (in part because of Al Pacino’s unusual performance as a Cuban gangster), De Palma had one of his biggest successes with THE UNTOUCHABLES, another gangster movie released in 1987. That movie earned Sean Connery his only Oscar. De Palma had another big blockbuster in 1996 with the first MISSION: IMPOSSIBLE movie starring Tom Cruise.

Although this documentary is from De Palma’s point of view, it’s a pretty accurate assessment of the kinds of movies he makes, including the predominant themes in them, and how he structures them. The movie clearly shows how De Palma takes Hitchcock’s style of filmmaking to create his own cinematic style, sort of like a jazz musician might take someone else’s composition to create his own personal variation.

However, the movie pretty much skips over De Palma’s four most recent movies, FEMME FATALE, THE BLACK DAHLIA, REDACTED, and PASSION, which have been among his least successful movies at the box office. Conveniently, De Palma overtly dismisses those movies, because of his contention that movie directors make their best movies in their 30s, 40s and 50s (De Palma made those four movies in his 60s). De Palma contends that Hitchcock’s movies after PSYCHO and VERTIGO are not as good.

The biggest problem with DE PALMA is that it provides a defense of the film director’s ultraviolent horror thrillers, including thrillers like CARRIE, BODY DOUBLE and FEMME FATALE. These movies also include overtly erotic material, including explicit nudity. Thus, DE PALMA contains some bloody scenes of ultraviolence, explicit nudity and sexuality from De Palma’s thrillers. The movie mentions the criticisms De Palma has received for showing so much violence (including sexual violence) toward women in his movies. De Palma’s defense against this charge is that he was making thrillers, and to him it’s more suspenseful and more cinematic to make the victims and potential victims in those thrillers women instead of men. Here, it should be noted that, BLOW OUT, one of De Palma’s most successful and most tragic thrillers, shows the hero unable to save the girl. This is exactly what happens in Hitchcock’s classic movie VERTIGO, where the movie’s main point is that the hero’s obsession with the woman ends up tragically killing her and destroying him mentally and emotionally.

Finally, DE PALMA also adopts the director’s leftist perspective on America, which crops up in his smaller movies like REDACTED, which is a story about American soldiers raping and murdering a woman in Iraq. Besides Hitchcock, one of De Palma’s other major influences was the French Marxist film director Jean Luc Godard. Both Godard and De Palma use techniques developed from the Marxist playwright Bertolt Brecht. These techniques distance the audience from the characters and story in a play or movie by calling attention to the fact that viewers are watching a play or movie by overtly manipulating the dialogue or sound effects or using split-screen visuals of two separate situations happening at the same time (one of De Palma’s favorite techniques). The documentary doesn’t criticize and even seems to promote De Palma’s Anti-American, anti-capitalist perspective.

Ultimately, like most Hollywood movies about artists and art, DE PALMA has a strong Romantic worldview of artistic expression as mostly a personal matter that shouldn’t be concerned with objective standards of truth, goodness or beauty. Of course, this view is hard to sustain completely because it’s ultimately an irrational and self-refuting position. So, DE PALMA, both the movie and the man, fails to totally sustain this position throughout its 111 minutes. Artists, and movies for that matter, may show disdain for traditional standards of truth, beauty and goodness, or society’s standards (not to mention God’s), only to invent their own.